Why is Nebraska listed after other states?

I have noticed something that I do not understand: Why is Nebraska listed after other states that start with an N in their name? One example is on page 2 of the Don't Waste Your Money article J.C. Penny Postpones Store Closings by Sarah Kuta. It lists Nebraska after North Carolina and North Dakota! In case the link goes stale, here is a snippet: 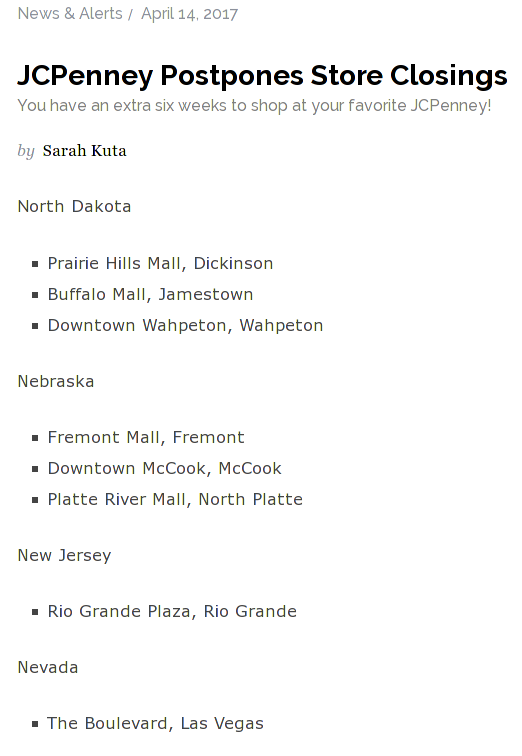 I have also seen this elsewhere when you have a drop-down list to select a state.

My guess is this: the table was produced from a database. The data there was sorted by state, but using a stored value that was the state abbreviation (they would have used the US Postal Service's official state abbreviations). The actual state name was then assigned via a lookup at the time the report was generated.

This would be consistent with the normal way databases are structured. A quick explanation:

The person who produced the report probably overlooked the fact that the alphabetical order for state names is different from that for the abbreviations. But that gives you the state name order in the report:

Not the answer you're looking for? Browse other questions tagged names sort-ordering or ask your own question.

8
keeping maiden name after marriage
12
Term for adjectives attached after names
6
Is Father Christmas unwelcome in the United States?
10
Why are names that begin with "Mc" first in order over names that begin with "Ma"?
0
Why are some first names always abbreviated and some not?
0
Comma placement after name
1
Good words for "before" and "after" that sort the same, both logically and alphabetically?