And that sounds fine for me if you are singularly referring to yourself, such as:

I have arrived at my home.

But when I try to use the word to refer to a group of people, such as:

We have arrived at our home.

It just peeves me for some reason. It feels more natural to say:

We arrove at our home.

We have arriven at our home.

They both feel far more natural to me than arrived does for some reason. Wiktionary lists arrove as a non-standard alternative to arrived, which indicates that at least some other people have felt the same way. How frequently are arrove or arriven used? What region(s) does this dialect belong to?

Me from the future: To anyone interested, I have discovered that Google Docs recognizes 'arriven' as a word but not 'arrove'

According to OED, these forms did exist (not necessarily with your spelling), as it mentions in its entry for arrive (v):

This is historical (so I'm not sure why Wiktionary lists arrove).

And again: They were wroth with him, when they had arriven to the promised land, because they said that he had taken the ruling of the people out of their hands; and they sought to kill him.

Arrove for arrived appears to be an analogous form based on some word like dive-dove.
The Dialect of Up-State New York: A Study of the Folk-Speech in Two Works of Marietta Holley

Historical Linguistics: An Introduction by Lyle Campbell (MIT Press, 2013) (originally published in 1988) suggests these forms are developing or are naturally generated:

Analogical extension (somewhat rarer than analogical levelling) extends the already existing alternation of some pattern to new forms which did not formerly undergo the alternation. An example of analogical extension is seen in the case mentioned above of dived being replaced by dove on analogy with the 'strong' verb pattern as in drive/drove, ride/rode and so on, an extension of the alternating pattern of the strong verbs. Other examples follow.

(2) Other examples in English include the development of the nonstandard past tense forms which show extension to the strong verb pattern which creates alternations that formerly were not there, as in: arrive/arrove (Standard English arrive/arrived), and squeeze/squoze (Standard squeeze/squeezed).

They used to be more popular than they are now (but "arrived" has always been at least 100x as common). 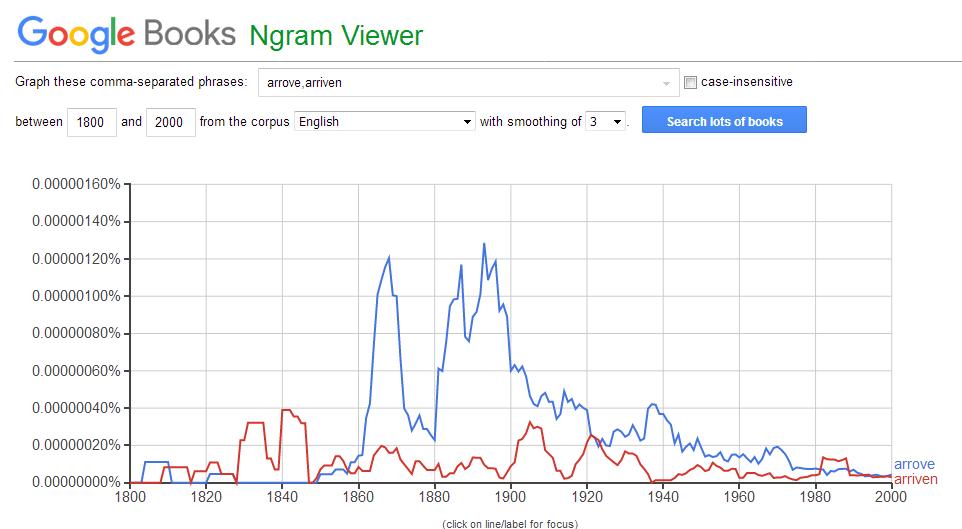 Not the answer you're looking for? Browse other questions tagged past-tense past-participles conjugation irregular strong-verbs or ask your own question.

1
Why is borne a past participle of bear?

11
Past participle used as a noun?
8
Using "ran" as a past participle
9
When can auxiliary "have" for a past participle in a modifier be omitted?
6
Is “have went” gaining common currency in AmE and BrE?
3
children as adjective as opposed to child
-1
When to use and not to use Past Perfect?
0
Reported/Indirect Speech and Past Simple with when. Can they get confused with each other?