I think the phrase "Broadway turkey" is part of Broadway slang. What's the meaning of these two headlines:

P.S. This was obtained from the "Three Stooges" episode, "Three Hams on Rye." I am not sure of the meaning of the name of the episode, either. 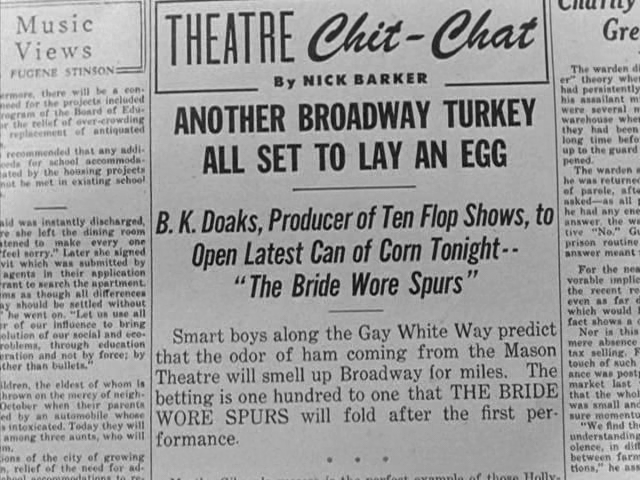 Don Wilmeth, The Language of American Popular Entertainment: A Glossary of Argot, Slang, and Terminology (1981) has an interesting entry for turkey:

Turkey: Virtually all forms of entertainment use this [term] to indicate a bad or losing show. Its origin comes from actors (turkey actors) who opened poor shows on Thanksgiving Day in the hope of making money as part of the annual tradition. Possibly began in New England when a down-and-out producer found a nonroyalty play, some unemployed actors, a used set, and booked a date during turkey week, usually a period when healthy attendance might be expected. It is also said, however, that the phrase is attributed to the actor-writer-director Dion Boucicault, whose melodramas were the sensation of the 1890s. Boucicault once had a lousy show that opened on Thanksgiving and which he described as his turkey.

The Boucicault story may be accurate, but if so it pushes the origin of the expression back to no later than the 1880s: Dion Boucicault died on September 18, 1890, at the age of 68.

Robert Hendrickson, The Facts on File Dictionary of Word and Phrase Origins, fourth edition (2008) points to a different source of the expression:

turkey. The domesticated turkey hardly knows what to eat and has to be attracted to food by colorful marbles placed in its feed; it often catches cold by getting its feet wet and frequently panics and suffocates itself when the flock presses together in fear.For such reasons, turkey has been slang for any stupid, worthless, useless, unsuitable thing since before 1930. Turkey for a poor, third-rate play, movie, or book is said to be an invention of humorist S.J. Perelman, who in the 1920s called himself a "Pennsylvania farmer of prized turkeys, which he displays on Broadway once a year."

Hendrickson may have obtained his information from "Click, Click. Gobble, Gobble," in the New York Times (November 25, 1993):

The Foulest Cut: In the 1920's, the playwright and humorist S. J. Perelman is alleged to have described himself as a "Pennsylvania farmer of prized turkeys, which he displays on Broadway once a year." The print premier of the pejorative usage, however, dates to the November 1927 issue of Vanity Fair, wherein Walter Winchell explained, "a turkey is a third-rate theatrical production." In 1941, James M. Cain broadened the slur in his novel "Mildred Pierce." ("The beach . . . was studded with rocks . . . it was simply a turkey.")

Know what a "turkey show" is?

The average citizen probably would think it some sort of poultry exhibition. But among theatrical people it doesn't mean that at all, acc[o]rding to W.H. Trueheart, manager of "The Hello Girls," who were at the Century theater last week.

"Originally the term carried no reproach with it," Mr. Trueheart said. "It used to be that in the big theatrical centers managers would be on the lookout for neighboring cities that had no show billed for Thanksgiving. They would get busy and bill the town and contract for the use of a theater. Then they would go out and pick up such actors as they could find and have perhaps two hours' rehearsal before giving the show. Their idea in giving the Thanksgiving show was to 'pick up a little turkey dough,' hence the term 'turkey show.'

"Later the term came to be applied to companies that did not play the big time, but filled engagements wherever they could on no regular circuit. Nowadays, however, the expression means simply a bum, no-account show. Some companies that started out as turkey shows developed into mighty successful ones. Often they had some excellent actors picked up when temporarily out of a job, usually on account of too much booze.["]

So by 1919, turkey in the show business sense of "a bum, no-account show"—whether on Broadway or off—was already established in entertainment industry terminology.

As for "can of corn," Josh notes quite rightly in his answer that the expression probably first arose in baseball, although why it arose there is not entirely clear. Here are some excerpts from the entry for "can of corn" in Paul Dickson, The Dickson Baseball Dictionary (1989):

can of corn/can o' corn n. An easily caught fly ball; a high fly ball that allows a defensive player time to stand under the ball and catch it easily.

The phrase has long been assumed to have come from the old time grocery store where the grocer used a pole or a mechanical grabber to tip an item, such as a can of corn, off a high shelf and let it tumble into his hands or his apron, which was held out in front like a fire net.

Dickson notes three other possible explanations, however: a longtime announcer (Bob Prince) who used the expression "It's as easy as taking corn out of a can"; the "kerplunk" sound that a baseball sometimes makes when popped up; a popped-corn-and-molasses confection called a cornball, sold and eaten at ballgames for many decades (no word on how the can part of "can of corn" figures into this explanation.

Dickson reports that the person behind the third theory of "can of corn" noted above also"determined that the term was in use in the early to mid-1920s, based on a series of interviews in 1953 with semi-professional players." In my view, the "cornball" theorist's dating of "can of corn" would have more credibility if (1) he had provided a contemporaneous example of its use from the 1920s, and (2) his "cornball" theory weren't so dubious.

So far, the oldest instance of "can of corn" in the context of baseball that I've been able to find is from The Stanford [California] Quad, volume 41 (1934) [snippet view]:

Sudden disaster struck in the form of three lost games to Southern California, all by a one-run margin. In the first one Anderson got enmeshed in a pitchers' duel with Troy's ace, Jim Appleby. The game went to twelve innings, and to S. C., 3-2. It was Heringer's ill luck in the next clash; and it began to look like a jinx when the Indian outfield got stuck in reverse in the ninth inning and S. C. scored following a fly ball that should have been a "can o' corn." Six errors did not help Heringer, although Stanford collected twelve hits.

Still, that instance from 1934 knocks a hole in the Bob Prince theory, since his broadcast career in major league baseball began in 1948.

But corn has another meaning in entertainment, as Wilmeth, The Language of American Popular Entertainment points out:

Corn: A largely derogatory term applied too almost anything in writing, directing, or performing that is trite, ridiculous, old-fashioned, or used in the hope that it will be a crowd pleaser. Most likely, the term derives from the use of such methods before less sophisticated rural audiences in the so-called "corn belt."

A "can of corn" in entertainment lingo is thus a trite production, utterly lacking in freshness, that is calculated to appeal to a low-end audience possessed of neither taste nor sophistication.

It is show business slang:

Not the answer you're looking for? Browse other questions tagged american-english slang or ask your own question.