Origin of the phrase “to carry a spear”

In general, I'm aware that the term "to carry a spear" or "to be a spear carrier" means to be involved in a play or movie, usually in a role that is meaningless or small.

Here's the wiki article and the tvtropes article.

Is there any record of when we started using the term for actors that weren't literally carrying spears, but were in small roles? Has the usage of the term increased or decreased over time?

Although the earliest citation in OED for 'spear-carrier' in the transferred sense of "(a) orig. Theatr. slang, an actor with a walk-on part" (OED) is from a 1960 New Yorker article,

1960 New Yorker 13 Aug. 97/1 The ‘Quartet’ is full of characters who in one novel may seem irritatingly superfluous spear-carriers,..but who in the ‘Quartet’ turn out to be members of a literary repertory company.

and so agrees with dating from other sources, the OED and other sources are contradicted by much earlier appearances of the term used in the general sense of 'walk-on bit part player', in the late 19th century.

Some of the examples I will cite may arguably be seen as more-or-less literal uses describing players who carried a spear, for example,

and the earliest attestation I found,

The attestations in total, however, suggest the the transferred sense conveyed by 'spear-carrier' was a metaphorical description of the role of the 'supernumerary' in theater. The clippings shown below (all links paywalled) trace that transference of sense through the final two decades of the 19th century. The evidence they provide is supplemented by an intertwining of references to supernumeraries (aka 'supers' and 'supes') as bit players who 'carry a spear' during approximately the same time period, but first appearing somewhat earlier (1871). 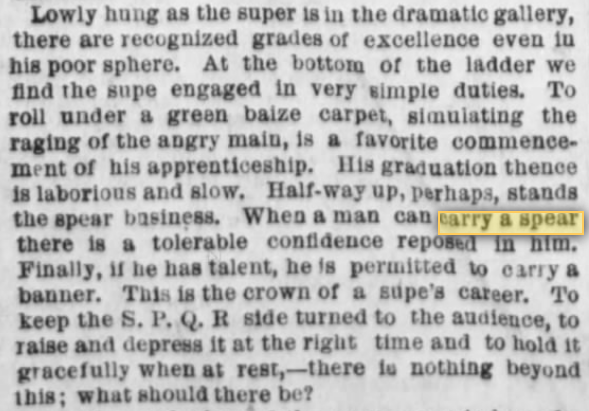 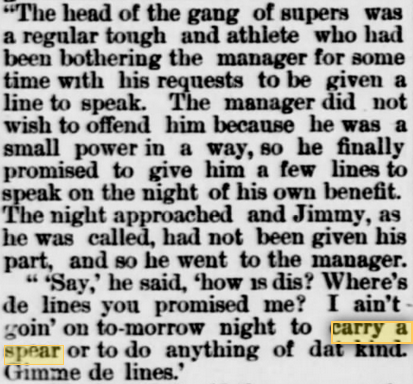 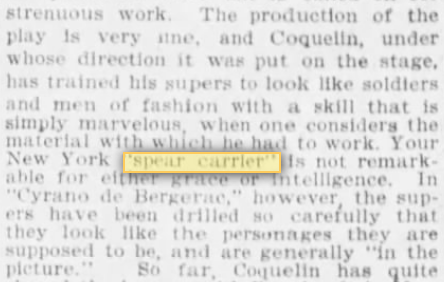 The evidence given above compellingly dates the origin of the term 'spear-carrier' in the transferred sense to the late 1800s. Two trends in the history are especially noteworthy:

Answering your question about the relative increase or decrease in the use of the term 'spear-carrier' over time is quite beyond the reach of my resources and enterprise. A proper answer would have to take account of proportionality: as a proportion of theatrical writing or speech, then, the increase or decrease in the use of 'spear-carrier' is opaque without significant labor and the employment of collocation data that has not yet, so far as I know, been marshalled for such purposes.

According to A/V A to Z: An Encyclopedic Dictionary of Media, Entertainment and Other Audiovisual Terms by Richard Kroon, the term first appeared in print with the meaning of an actor with a walk-on part in 1960 after the background performers in a Wagnerian opera who do little more than walk on stage while carrying a spear."

The meaning of the term has broadened, of course, to refer to others besides actors who play a small role in some undertaking. E.g., Merriam-Webster's Dictionary of Allusions lists uses of spear-carrier in a political context over the last few decades, such as Richard Nixon's aide John Ehrlichman when testifying before the Senate Watergate committee in 1973 when he said "There were quite a few spear-carriers at the meeting from the White House staff and I was simply there to get information."

In regards to your question whether usage of the term has increased or decreased over time, one can use the Google Ngram Viewer, which is "an online search engine that charts frequencies of any set of comma-delimited search strings using a yearly count of n-grams found in sources printed between 1500 and 2008" to answer such questions. A Google Books Ngram query for spear-carrier shows that "spear-carrier" appeared in 1857 in some book scanned by Google, though spear-carrier may not have had the meaning there of a bit player in a play, but its usage increased dramatically after 1960 up until about 1990 when its usage declined until about 2000 when its usage increased again. The results shown end at 2008.