Use of “f ” instead of “s” in historic, printed English documents

I was at a museum in London yesterday, and one of the items on exhibit is a document from the eighteenth century. It uses the letter f a lot where s should be used—for example, in Majefty. 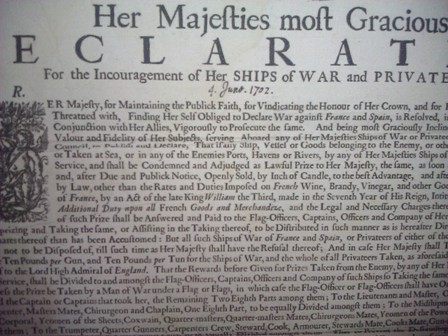 Did the letter f once have the same sound as s today, or were some of those words actually spoken with an f ?

The long-s originated at a very early date in cursive Roman scripts, and can be seen in both Old Roman Cursive (1st to 3rd centuries AD) and New Roman Cursive (late 3rd century to 7th century).

("The Long and the Short of the Letter S", by Andrew West, BabelStone Blog)

“The death knell,” he writes, “was finally sounded on September 10th 1803 when ... The Times newspaper quietly switched to a modern typeface with no long s or old-fashioned ligatures (this was one of several reforms instituted by John Walter the Second, who became joint proprietor and exclusive manager of The Times at the beginning of 1803).”

This may have been due to the fact that:

Long ‘s’ fell out of use in Roman and italic typography well before the middle of the 19th century; in French the change occurred from about 1780 onwards, in English in the decades before and after 1800, and in the United States around 1820. This may have been spurred by the fact that long ‘s’ looks somewhat like ‘f ’ (in both its Roman and italic forms), whereas short ‘s’ did not have the disadvantage of looking like another letter, making it easier to read correctly, especially for people with vision problems.

("The Gradual Disappearance of the Long S in Typography", Jeremy Norman's HistoryofInformation.com)

Not the answer you're looking for? Browse other questions tagged orthography history pronunciation-vs-spelling typography or ask your own question.

4
Esh (ʃ ) as S in English language?
3
How exactly was the long S used and why did people stop using it?
0
What is this English letter called?
1
Name of the archaic "F" character used for an "S"
60
What animal is a “weefil”?
6
Is there a synonym for "defenestrate"?
9
The rise of "all of the"
2
Where does “goodness me” come from?
3
Origin of an ethnic slur

45
Does the quirky spelling in English actually make it easier to read?
13
Is the history of h-dropping in English in any way related to the silent h of French?
23
Old English instead of Latin in early Britain
12
Apostrophes in contractions: shan't, sha'n't or sha'nt?
4
Why are I and O always capitalized, but a is not?
1
How was English orthography reformed?
5
How are double consonants pronounced in Old English (Ænȝlıſc/Eald Englisc/Anglo Saxon?)
31
Usage of diacritics in loanwords
0
Why is the word "cello" pronounced with CH /tʃ/ and not S?