Usage of “to waiver” in BrE and AmE

According to the site metro.co.uk, during a recent speech the British PM said:

Theresa May: "Our resolve will never waiver".

Though it is clear what she means by that sentence, "waiver" is generally used as a noun and most likely the term here is just a misspelling of "waver". Curiously the same mistake can be found in other sites like that of The Financial Times for instance:

But today we meet as normal – as generations have done before us, and as future generations will continue to do – to deliver a simple message: we are not afraid. And our resolve will never waiver in the face of terrorism.

As clearly stated here in the Grammarist waiver is a noun, while waver is a verb, and actually, the only source I could find that mentions "waiver" as a verb is the AHD:

And Wiktionaryoffers a usage example suggesting that it means to waive:

To waiver (transitive) To waive.

Is the the usage of verb "waiver" in the British Press just a misspelling or a new idiomatic usage of the term?

Is waiver a common verb in AmE? 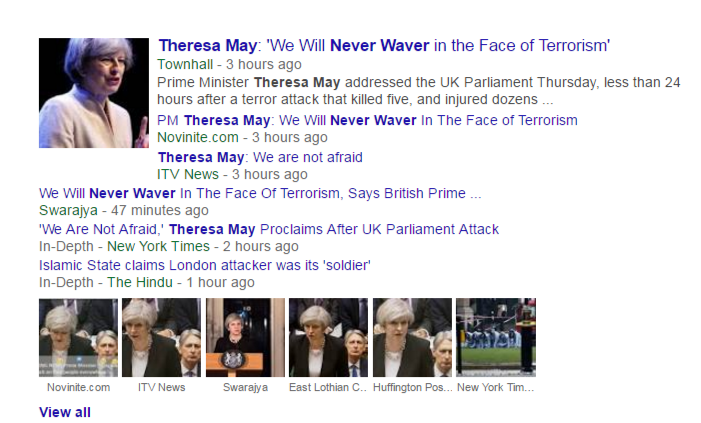 And there are 197 results on Google News for "not waver" "Theresa May", a number of them are from American newspapers and websites too.

That's not to say the spelling error does not exist, the orthographical slip up seems to be gaining territory, and will continue to do so because newspapers can no longer afford the luxury of hiring the necessary numbers of copy editors, or spend/waste precious time proofreading articles, those days are far behind us.

Google News reports 29 results for "not waiver" "Theresa May"

Oxford Dictionaries has a footnote in its entry for waive (verb)

The American English corpus, examined by Google Ngram, agrees that waiver is rarely used as a verb, wavered (red line) dramatically surpasses waivered (blue line). And in those extremely rare instances, waivered functions as an adjective rather than a verb e.g. Clients were asked for contributions to help defray the costs for those waivered services which would otherwise have to be self-paid in their entirety. source

There is no doubt that the verb the Prime Minister was calling into use was waver, not waiver. The typo may indeed have been caused by a spell-checker (I find they are often more trouble than they are worth).

The OED has many senses of the verb waver which relate to Mrs May's words. One of them is 5a.

5a. Of persons, their sentiments, etc.: To exhibit doubt or indecision; to change or vary; to fluctuate or vacillate (between); to falter in resolution or allegiance; to show signs of giving way.

Examples exist from the fourteenth century. More modern ones are:

3
Is 'waived it through' correct English?

0
Irregular verbs: differences between BrE and AmE
2
“inquisitive” vs. “inquiring” in AmE and BrE
8
What's the AmE and BrE for “tartaruga”?
16
Origin of the slang AmE and BrE usage of “beef”
4
What do you call 'underground floors' in AmE and BrE?
3
AmE vs BrE pronunciation of “piste”
2
Do AmE and BrE dictionaries treat compound adjectives differently?
4
The difference between 'purview' and 'remit' (BrE/AmE)?
5
Is “buffeted” the AmE version of the BrE word “buffetted”?
3
Status of sometime vs some time in AmE and BrE