So, Can linking verbs be used with "continuous tenses"?

What Are Linking Verbs?

Alan is a beast.

feel (linking verb) to experience a particular feeling or emotion

Do you still feel hungry?

So, feel in this meaning can be used with continuous tenses

But I would think this sentence "Do you still feel hungry?" does not make much sense because it uses "simple present tense" which expresses something that happens regularly. Noone would feel hungry regularly.

feel (linking verb) (not used in the progressive tenses): to have a particular physical quality which you become aware of by touching

This site says "Speakers sometimes use the Simple Present to express the idea that an action is happening or is not happening now. This can only be done with Non-Continuous Verbs and certain Mixed Verbs."

But "The water feels warm." could mean "The water is warm now" (simple present with non-continuous verb expressing things that is happening now - a temporary action)

appear (linking verb) (not used in the progressive tenses): to give the impression of being or doing something

She didn't appear surprised at all.

seem (to somebody) (to be) something (not used in the progressive tenses): to give the impression of being or doing something (synonym: appear)

So, we cannot say "you are seeming happy" or "you are appearing happy".

But we can say "The future’s looking good." (source)

So, some verbs has the same meaning but one can be used with "continuous" & the other can not, right?

Ex: "you are looking happy", but "you seem happy".

The [finite form of to be] + present participle is used not only to denote continuous states or progressive actions but also informally, I submit, the ingressive or inceptive aspect, i.e., that an action or state has begun. Neither statal nor copulative/pseudo-copulative verbs are always exempted, especially in informal speech. There are other uses which have nothing to do with aspect but are used as intensifiers and polite hedges.

Some forty minutes into an hour baking time for fresh bread, the Malliard reaction is doing its magic:

That bread is smelling good.

I am not suggesting that the bread is in a continuous state of smelling good, but that the bread has begun to smell good (ingressive aspect) and it's time to get the butter out of the fridge, because I'm fixing to have a big slice of homemade bread (prospective aspect, but only for some speakers of Southern American English).

In a more formal register, I would say:

The bread is beginning to smell good and I'm about to have a slice of homemade bread.

Think of any food that looks unappetizing before cooking — steaks on the grill, a stew simmering for hours, dried beans — and wait for The Moment.

By like token, I could be mixing the hot and cold water to get just the right temperature for a bath or shower: 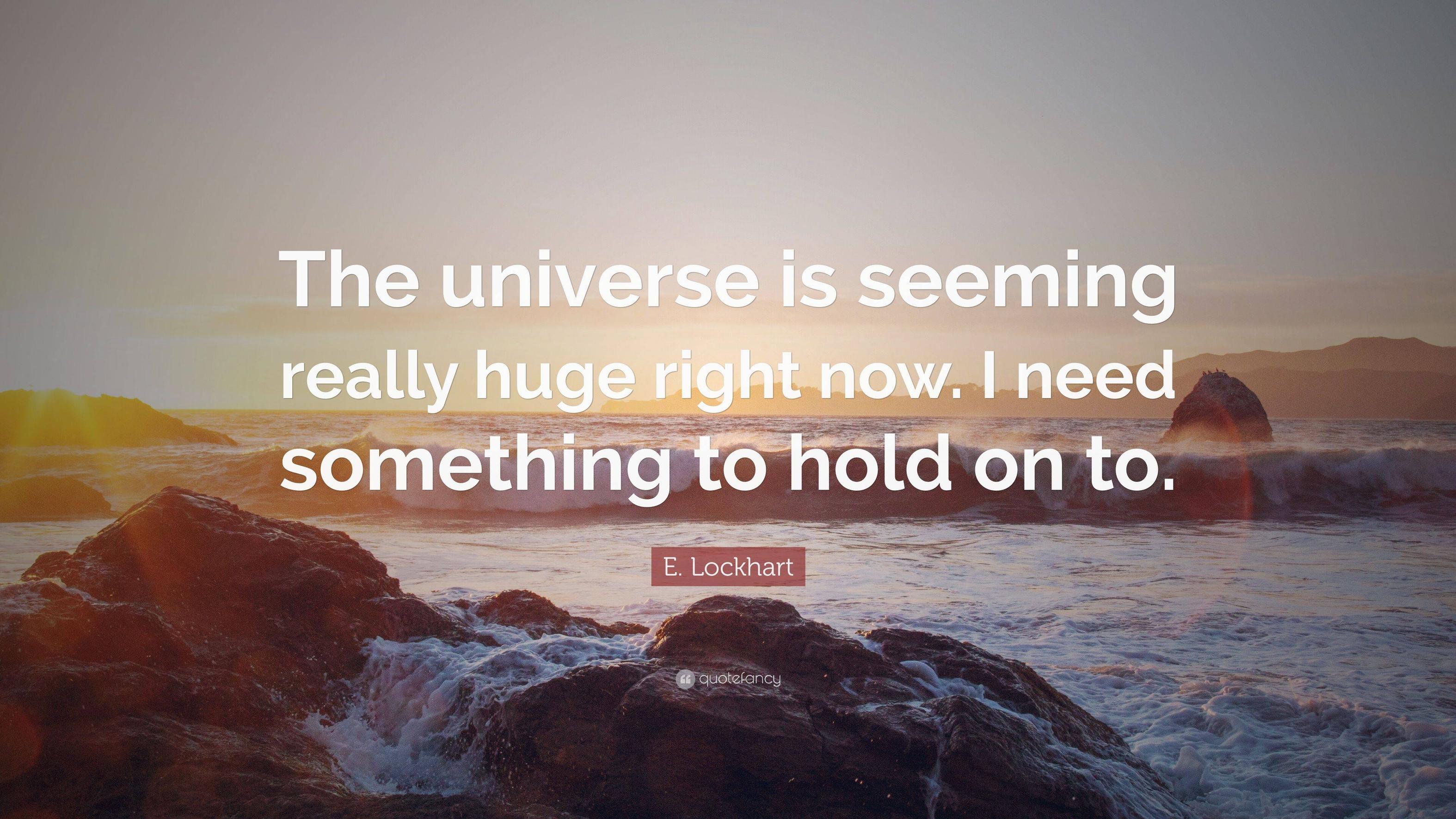 This apparently meme-worthy citation describes an emergent feeling of loneliness or contingency upon contemplating the vastness of the universe (ingressive aspect) using the meaning of seem as "seem to feel" and in the continuous form, accentuating a moment of intense emotion right now. It invites the reader to identify with the author in a way which to her apparently wouldn't be as rhetorically powerful as simply saying the universe seems huge. The universe, of course, has been huge since the Big Bang and it always is, but in this moment, she has begun to feel it.

This usage is best solved by acknowledging a lexical difference: in the present tense one is making a judgment about his personality; in the continuous, instances of behavior, in this case, today.

Permanet states or non-animates without agency can never be used with the continuous:

*She is being Australian. (nationality, not in some odd scenario behavior)

*He is being short.

*My shirt is being green.

While the first sentence could be parsed as ingressive, this usage seems more like a polite hedge, while the second is best viewed as an intensifier which, like the meme, suggests a heightened level of personal involvement.

Can linking verbs be used with “continuous tenses”?

I think the answer is: yes, at least in some cases.

I'm really not sure what to tell you; some of the examples online of supposedly incorrect formations sound fine to me (a native speaker).

This is perfectly idiomatic (the definition you found does not say otherwise, either). You can find plenty of examples in this Google Books search.

These are modified versions of the examples marked as "not used in the progressive tenses", which still seem idiomatic to me. See here and here for some examples (not as many as the first search but still plenty).

Another perfectly idiomatic utterance. See this ELL question for details. "It's looking interesting" is also idiomatic, as can be seen in the number of results here.

The first one is idiomatic, the second one is not. These examples are from this site, which explains:

Kolln suggests that we think of the difference between stative and dynamic in terms of "willed" and "nonwilled" qualities. Consider the difference between a so-called dynamic adjective (or subject complement) and a stative adjective (or subject complement): "I am silly" OR "I am being silly" versus "I am tall." I have chosen to be silly; I have no choice about being tall. Thus "tall" is said to be a stative (or an "inert") quality, and we cannot say "I am being tall"; "silly," on the other hand, is dynamic so we can use progressive verb forms in conjunction with that quality.

The same applies to verbs. Two plus two equals four. Equals is inert, stative, and cannot take the progressive; there is no choice, no volition in the matter. (We would not say, "Two plus two is equalling four.") In the same way, nouns and pronouns can be said to exhibit willed and unwilled characteristics. Thus, "She is being a good worker" (because she chooses to be so), but we would say "She is (not is being) an Olympic athlete" (because once she becomes an athlete she no longer "wills it").

A link verb does not indicate an action or a state - it simply links or attributes information in the complement phrase (a noun or an adjective) to the subject. The true link verbs are be, become and seem. Then there are the quasi link verbs like feel, appear, look, taste, etc.

Feel is not a true link verb because it so often indicates the action of feeling or experiencing something. How a construction that uses these kinds of verbs actually functions is often a matter of the complement type and interpretation.

I feel hunger. S+V+DO - feel is an action verb; present simple; statement of fact (not routine). (People don't say this when they are hungry, btw). Try the substitution - you can't do it, it's not a link verb.

I feel hungry. S+LV+Adj - present simple - feel is a link verb (adjective complement), same as I am hungry.

As a link verb feel doesn't take a noun as a subject complement. Feel, even as a link verb retains some of its active aspects. To feel hungry, means to feel your hunger. In I am hungry the verb is not at all active. I think most of the quasi link verbs behave in this lopsided way.

In the case of using continuous tenses with link verbs, I'm not entirely sure but I think a sentence like:

Nevertheless, I am feeling hungry or The cake is looking delicious are acceptable idiomatic constructions, but are harder to pin down grammatically. I think I am hungry and The cake looks delicious are better choices with the exact same meaning because they are clearly grammatical.

So, if you want to see a link verb in such a construction, you might have to look at it this way (I'm not sure about this):

Where 'feeling hungry' functions as a noun complement of the LV 'be'.

Or perhaps one could see feeling hungry as an untensed verb phrase/ participle functioning as the subject complement.

A similar explanation might suffice for, 'You are looking good.'

No, in literary English one cannot put linking verbs into the continuous tenses. You are looking good is no better than You are seeming excited, despite the frequency of the former in colloquial usage.

feel is not a linking verb because it expresses an action, performed by the person to whom the subject refers, of experiencing a certain emotion with respect to their physical state.

however, feel is a genuine linking verb, because it is the speaker who experiences the feeling of warmth. Therefore, feel does not here attribute any action to the water but merely connects it with the concept of warmth via the speaker's perception. All your quotations from the Oxford dictionary fall into this category, whereas the one from Longman seems wrong in considering feel a linking verb in

Do you still feel hungry?
You can never tell what he’s feeling.
Stop exercising if you feel any pain.
I’m feeling a little better today.
Marie immediately felt guilty.
When his dad left, he felt as though his world had turned upside-down.
I felt like I’d really achieved something.

where feel works like any other verb of perception, such as see or hear. But Longman does not call them linking verbs, and rightly so.

Edit: Observe that all linking verbs always have the middle voice.

1
"Your idea's sounding great" or "Your idea sounds great"

4
Use of "Sure" in reply to help offering and to appreciation
6
Usage of "been to" in perfect tenses and in other tenses
0
Is 'already' + (simple past) + (time of action) correct?
2
Informal Suffix Usage: -ity/ety
2
Using "use" with "to" and "for" when expressing purpose
1
The two uses of "be"
7
Is "spellbind" a defective verb?
2
So, "might have been sleeping" (Modal perfect continuous) corresponds to past continuous, present perfect continuous or past perfect continuous?
1
Does "I like my new car" express a permanent or temporary state?
9
Is "I am running" or "I run" grammatical to say while running?