What is the name of a business that fixes clothes?

The following local business, which I'm trying to add to Google Maps, fixes clothes by sewing and patching them or changing their hemline.

This is a workshop, not a self-service business: The client hands over a few pieces, and collects them a few days later, rather than fixes the pieces themselves by renting a spot by a sewing machine.

Is there a term for such a business in English? I could not find a proper translation for the Hebrew term "מתפרה". 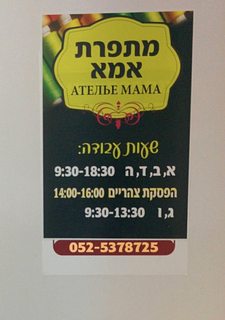 Preface: I'm not sure of the extent to which the commonly used English terms for this service might vary by country. I can only share the US perspective and I'll leave it to other readers to respond regarding any differences in other places.

There are two aspects to this--the "technical" term for someone who performs the service, and the term for the service, itself. I'll try to address both.

Some brief context: The kind of minor repairs and alterations described in the question tend not to be a lucrative business, so there aren't a lot of shops specializing in it. People who go to a shop to obtain the service generally get it at a business specializing in something else and the service is offered as a supplement.

Minor repairs and alterations are frequently services offered by dry cleaning establishments. The work is typically performed by someone who is skilled but not a formally trained professional. So the commonly used terms in that case often refer to the service rather than the person doing it.

The sign on the store and the terms used in advertisements will refer to it as alterations or repairs or a combination of the two, like permutations of "alterations and repairs" sometimes in combination with other related words, like "clothing". If the sign only says "alterations" the public would assume that includes repairs, and vice versa.

There are some shops that specialize in just such minor work, and the signage and advertising would generally be similar.

At the other end of the spectrum, you could get clothing altered or repaired at a shop that specializes in more complex and comprehensive work. In that case, the work is generally performed by someone with formal training, or an apprentice under their supervision, or sometimes a person without formal training who has become very skilled. The terminology used generally refers to the person doing the work, including on signage and in advertising.

So if you are just looking for the most generic term for a person or establishment that performs minor repairs and alterations on any clothing, "tailor" is probably your best bet. For terms that would be on the signage or in the advertising of a shop that offers these services, it would likely be "alterations", "repairs", "tailor", or "dressmaker".

[1] A person whose occupation is making or altering garments (such as suits, jackets, and dresses) typically to fit a particular person. (M-W) Some dictionaries add a qualifier such as "especially men's clothing".

[2] A person whose occupation is the making or alteration of women's dresses, coats, etc.

Some (lesser?) dictionary sites include repairing clothing in the definition of a tailor...

Free Dictionary: tailor n. One that makes, repairs, and alters garments such as suits, coats, and dresses.

Cambridge English Dictionary: tailor [US] n. Someone whose job is to make, repair, and adjust clothes.

Dictionary.com: tailor n. a person whose occupation is the making, mending, or altering of clothes, especially suits, coats, and other outer garments.

However, it's worth noting that others like Miriam-Webster and Oxford Living Dictionaries don't, only limiting it to creation and fitting. Changing the hemlines would definitely fall under the basic definition of a tailor, patching them up may or may not in my limited experience with such businesses.

When it comes to the open source alternative to Google Maps, OSM does indeed use the term tailor for this kind of business:

Tag:shop=tailor: A place where clothing is made, repaired, or altered professionally, especially suits and men's clothing.

While an outfit does cover both men and women garments, it is not often used in connection with repairing or mending clothes, for some speakers an outfit is another name for a business, a small company, or even a kit. The name clothing repairs does not have any ambiguity, and clients would know exactly what to expect.

repair (n)
the act of fixing something that is broken or damaged:

Not the answer you're looking for? Browse other questions tagged terminology translation or ask your own question.

11
What is a one-person business called?
3
What is a business entity that your business does close business dealings with called?
7
Name of a Product that Fixes the Problems Created by Another Product
0
translation of the award name
3
Name for a business model where you get free 'basic' packages
0
What is a word to describe the standards that people in the business community just know?
0
What is the name for a video that is shown as a preamble to an interview on a talk show?