What is the origin of the term continental breakfast? Was it originally from British English and meant to describe a sub-par breakfast eaten by mainland Europeans?

According to EtymOnline, the phrase continental breakfast is from 1911:

I do doubt whether this estimate of the term's origin is correct. There are instances of it in The Sanitarian", which was written in 1896: 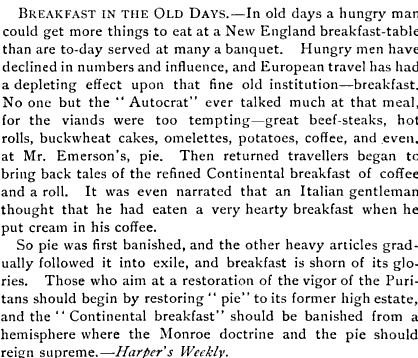 There is also an instance of it in the Philadelphia Friends' Intelligencer in 1877:

Finally, there is a London reference from the 1850s in the Life of William Etty, R. A.:

It is possible that the term is even older, though probably not by much. In any case, the continent refers to the European mainland. So a continental breakfast is the breakfast eaten on this continent. According to Wikipedia, this meal is:

a meal based on lighter Mediterranean breakfast traditions. It is a light meal meant to satisfy one until lunch. A typical continental breakfast consists of coffee and milk (often mixed as cappuccino or latte) or hot chocolate with a variety of sweet cakes such as waffles/pancakes, brioche and starchy foods such as croissants, often with a sweet jam, cream, or chocolate filling. It is often served with juice. The continental breakfast may also include sliced cold meats, such as salami or ham, yogurt or cereal, or a slice of cheese. Some countries of Europe, such as the Netherlands and those in Scandinavia, add fruit and cheese to the bread menu and occasionally a boiled egg or a small serving of salami.

It is unclear whether this is the original contents of such a meal. However, it seems that an English breakfast is different:

Traditionally, people in the United Kingdom and Ireland have enjoyed a substantial hot meal for breakfast, featuring eggs, bacon, and sausages, accompanied by toast and tea or coffee. These items are sometimes eaten separately on morning rolls. In Britain, this was traditionally known as an English breakfast

For reference, the article also mentions why there are hotel Continental breakfasts now:

So it is unclear whether (though the term is British) it was intended to demean the food eaten by continental Europeans. It does, however, create a distinction between the English and continental meals.

I suspect it sells better than "pitifully inadequate but cheaper for us breakfast" !

"Undoubtedly it is true that during the past few years there has been a well defined effort to substitute the Continental breakfast of rolls and coffee for the hearty meal of many dishes that has so long been served in this country but, though this project has received the support of more than one American of high social station, it has failed ignominously, and simply because the great mass of the people agree with William Dean Howells in designating breakfast as their "best meal."

I first encountered the term continental breakfast when I moved to Berlin, Germany in 1989 from the U.S.A. The breakfast—found at various cafes—consisted typically of sausage, fried eggs, toast, and canned, sweetened baked beans! Depending on the establishment this was at times listed as English Breakfast. In any event, both menus contained the beans. Without beans, the same fare was sometimes referred to as American Breakfast, to the best of my memory. Granted, I hadn't stayed in hotels much before then, but nevertheless, I did not start seeing "continental breakfast" in America until several years to a decade later after returning to the States.

I absolutely believe the term refers to Anglicized breakfasts, perhaps including biased influences upon them. German breakfast could be hearty or not, left up to the individuals appetite. Brunches would include soft boiled eggs in egg cups and sweet breads. The alternative breakfast was Muesli, with the basis being raw rolled oats and lots of fruit, nuts and unsweetened yogurt or Kafir.

I ate in many households as well as eating establishments; the "German" fare was common in varying forms in different countries. Therefore, I wonder if the original, British term "continental breakfast" was translated (perhaps in retaliation?) as "the OTHER continent(s)" within each continent. My impression is that American Hotel chains have conveniently co-opted this term and equated it with sugary cereals, donuts, and light cheap fare; since this term is often used at low end establishments where international travel is assumed to be not as common amongst the clientele.

3
Origin of 'jive', 'jive turkey'
6
Origin of "Plumb" to mean "absolutely"
11
Origin of "spick and span"
7
Origin and meaning of "strealish"/"streelish"
13
On the origin of "blizzard"
8
Origin of "picnic"?
0
Origin of "moke," used in the mildly derogatory term "you lil' moke"
5
Continental Grip
3
Origin of "surf"
1
Origin and etymology of "travel"