Making statistics on material either women or men wrote, I hypothesize that there are more vowels when the writer is a female and more consonants when the writer is male. Are there any evidence for or against my notion? Did anybody make a study like that? Does it have any purpose besides being a "fact"? A purpose I can think is revealing forgery when a man for instance in a text pretends to be a woman or vice versa, a woman writing to you pretending to be a man then according to patterns you could get an indication.

Edit: I changed it to a real hypothesis about how sounds change since we may wish to compare phoneticallly if doing a real study that could indicate for instance whether the next message is from a man or a woman.

Just out of curiosity I have done some quick statistics.

I downloaded the following books from Project Gutenberg

After removing the common Project Gutenberg header, I've read the files in R, split them into characters and let it count vowels and consonants. 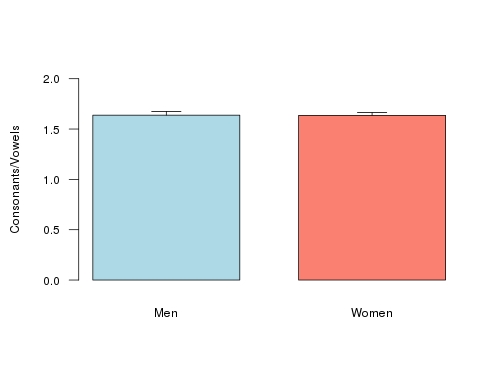 There is no statistical significance in the two groups (p=0.89, t-test)

I played some more with the data and I got this bargraph of usage of the single letters. 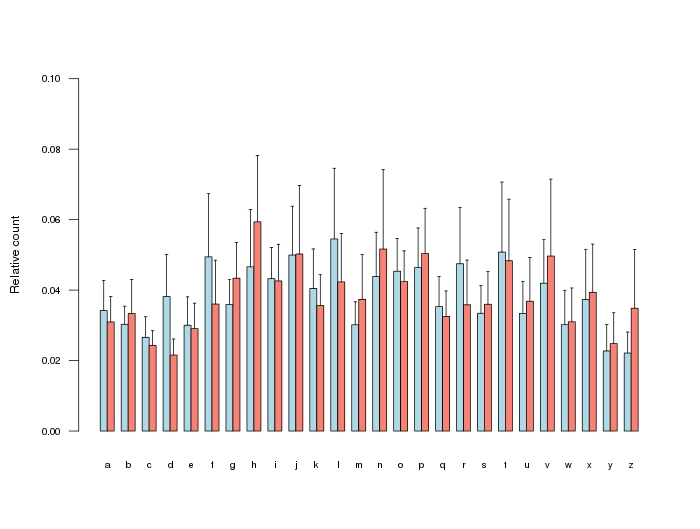 Again, you can see no major differences between men and women writers

EDIT2: I repeated the analysis with 10 books per group. I would say that there is definitely no difference

1 I considered a, e, i, o and u as vowels, the result does not grossly change including y.

Not the answer you're looking for? Browse other questions tagged grammatical-gender figures-of-speech sounds or ask your own question.

6
Difference in male vs female use of the English language

13
Female Actor or Actress
20
“Gentleman” is to “male” as what is to “female”?
6
Difference in male vs female use of the English language
5
Sun and moon: male or female?
3
Can verbally female-concerned idioms be used for male cases, (and vice versa)?
8
Can “female”/“male” be insulting?