How can the relative pronoun 'which' have an adjectival phrase as its antecedent?

As “bad” as he was feeling for producers of both films, Kimmel admitted he was also “trying really hard not to laugh.” It was only after Denzel Washington yelled “Barry” from the front row that Kimmel realized he should step away from the microphone and let Moonlight director Barry Jenkins deliver his acceptance speech.

“I did not pull a prank,” Kimmel assured skeptical viewers at home, saying that if he did he would have put a Bed, Bath and Beyond coupon in the envelope instead. “By the way, the producers of La La Land were very gracious, which they did not have to be, on stage and off,” he added.

The boldfaced portion is a relative clause in a supplementary use, and it seems that 'which', a supplementary relative pronoun, has 'very gracious', an adjectival phrase (AdjP), as its antecedent.

The call of the question has been shifted from "Can which have an AdjP as its antecedent?" to "How can it do so?"

Relative clauses with which can have a wide variety of phrases as antecedent, despite the fact that which is often described as a relative pronoun:

The Original Poster asks why which, a relative pronoun, can have an adjective phrase as an antecedent when other pronouns can't. The answer is that all of the phrasal categories mentioned above can be referred to with a pronoun given the right circumstances:

The reason that this can happen is that a pronoun can stand in for any subject, direct object or object of a preposition, within the sentence or clause that the pronoun occurs in. It is its ability to do this which makes us categorise it as a pronoun. The phrasal category of its antecedent is of no consequence. In these examples, the pronouns are often the subject of the sentences that they occur in.

Maybe this might make us think that this gets to the nub of the Original Poster's question. However, it doesn't.

What the Original Poster has noticed is that certain relative clauses with which—very differently from the examples above with it—have a gap in the clause which does not correspond to a noun phrase in any way.

Here we see which representing a verb phrase and an adjective phrase within the relative clause. The common factor in such relative clauses is that the phrase or clause represented by which must be the complement of an auxiliary verb. (Note that in most modern grammars, auxiliary verbs are verbs with particular properties, not verbs that must come before another verb)

Such constructions have been studied a lot in recent years and have been used as evidence with regard to several important linguistic questions, such as whether infinitival-to is actually a non-finite modal verb.

Here is a relevant section from The Cambridge Grammar of the English Language (Huddleston & Pullum, 2002 pp. 1523): 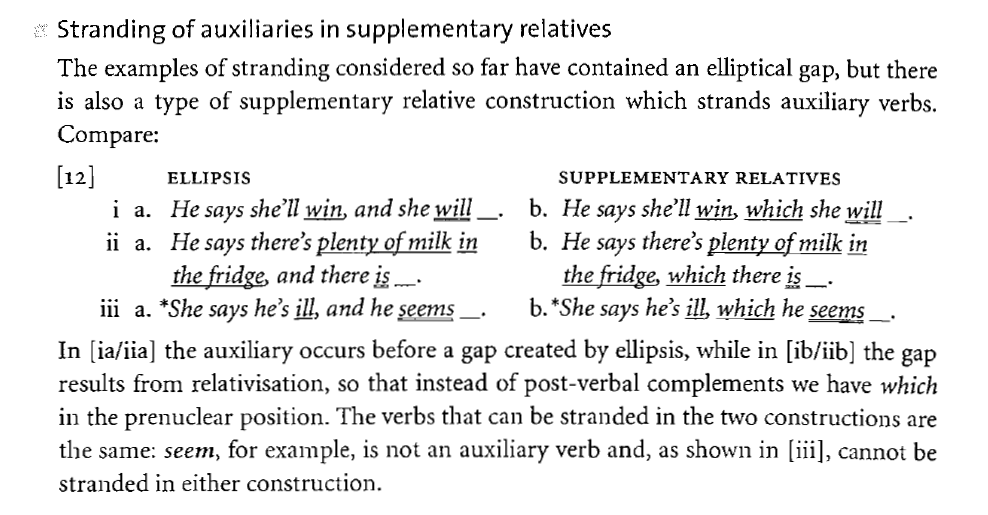 Arnold & Borsely, in their paper Auxiliary-stranding relative clauses (2010) give various arguments about why which must still be a pronoun in such cases. Other people have found their arguments persuasive, which they might be.

Most grammars define a relative pronoun as something like this:

A relative pronoun is used to link a so-called relative clause to the head of a noun phrase or, in some cases, to a whole clause.

Either a nominal or clausal element is, according to most definitions, the only possible antecedent for a relative pronoun.

This would suggest that when a copular clause with a predicate adjective is followed by a nonrestrictive which relative clause, the antecedent is the entire preceding clause. That indeed is usually the case:

Also, the pictures and maps are large and colorful, which makes them attractive and exciting, and helps the children remember historical events connected with the illustrations. — The Volta Review, 65-67 (1963), 176.

That the pictures are large and colorful, i.e., a state, is what makes them attractive, etc. The antecedent of which is thus the entire independent clause.

This would also seem the case when the causative verb is in the main clause instead of the relative:

Its elegant trees, flowers and open green spaces are everywhere prevelant and its magnificent marble buildings are decided civic assets and add to its physical beauty, and make it colorful, which is in marked contrast to the drabness of most large cities. — Transactions of the American Society for Steel Treating, 1927.

The “drabness of most large cities” is a state, which is explicitly contrasted to a city having been made colorful, i.e., the resultant state, rather than the adjective alone: the causative verb must be included in the antecedent, and — in for a penny, in for a pound — the subject as well.

If, however, the adjective as descriptor is topical rather than the state it describes, then the antecedent is the predicate adjective itself, and not the entire clause.

This is especially obvious because the copula is repeated in the relative clause rather than having a different verb make its own argument, as in the two “colorful” examples above. In this case, the most economical substitute for which is the adjective alone, not the subject's being in a state so described.

He was no intellectual, God knows, but he was highly intelligent—which a whole lot of 'intellectuals' aren't, you know—and he knew his fellow man from a rough and crowded life. — Adlai Stevenson about the late Frank Knox, Sec'y of the Navy during WWII. The Progressive (magazine) 1960.

Be forewarned, it is a very big chair and is really meant for those who are quite tall, which I am not, at only 5 feet. — Customer review for an office chair, Walmart website.

But asking any more questions would make her seem nosy—which she was, of course. She'd been nosy all her life. — Vicki Lewis Thompson, A Last Chance Christmas, 2014, 26.

He thought he was good enough, which he wasn't, and he did himself no favours by harping on about it. — Mark Mills, The Long Shadow, 2013.

31.03.2009 It was my first out of college job and I will always appreciate how cool she was, which she didn't have to be to a Jr. Project Manager… Lost Angeles blog.

Still he lay there, sprawled out, pretending he was half-drowned, which he wasn't at all. He hadn't been in the water long enough to be even a quarter-drowned, or an eighth-drowned, for that matter. — Catherine Cate Coblentz, The Blue Cat of Castle Town, 1949.

This construction takes the form of a disjunct inserting a writer’s opinion affirming or negating the quality described by the adjective, not a state, resultant or otherwise.

An adjectival antecedent is equally possible with dependent infinitives of linking verbs:

He continued to tell her there's no need to get angry — which she wasn't AT ALL even though I thought she had every right to be. — Yelp review, IRS Office, San Marcos CA.

When they entered, the king bade these chiefs be silent, which they were instantaneously. — Robert Pickering Ashe, Two Kings of Uganda, London, 1890, 75.

In the last two examples, the relative clause does not affirm or negate, but gives a response to a warning or command: I warned her [beforehand] to be careful, and she was; the king said “Be silent!” and they were. The which-clause here is not disjunctive, but simply continues the narrative.

I have not readily found any source which discusses at any length an adjective/adjective phrase as the antecedent of relative which, even though such a construction is syntactically distinct enough from those taking nominal or clausal antecedents that you'd think someone might have mentioned it.

This may be changing. An article posted online by two scholars from Essex University, “Non-nominal Which-Relatives,” suggests

The use of which with a non-nominal antecedent is quite restricted. Examples where the associated gap is a VP, PP or AP complement of a lexical verb are bad, as are examples where the gap is an adjunct.

To illustrate the “bad,” the authors include the following example:

I’m not sure what supplementing the verb in the relative with to be does to the discussion here or in the article, but on the following page, citing Ross and Pullum/Huddleston, the authors offer the following examples — without asterisks — to illustrate which-relatives that strand the auxiliary verb. This section of the article essentially reprises the same arguments one of the authors made — with the same examples — at a 2010 conference in Paris:

Now it seems to have escaped the authors’ attention that in d and e, is is decidedly not an auxiliary. That, however, does not detract from the conclusion that the antecedents of which are clever (d) and in Spain (e) the latter a locative complement, just as the antecedents in the other examples are also non-nominal.

As others interact with this article, one can assume that further observations about this construction will be made.

Not the answer you're looking for? Browse other questions tagged relative-clauses relative-pronouns antecedents or ask your own question.