I am looking for a single word similar to a turn of events, changing one's stars/destiny, passing a crossroads or doing something that would cause someone's life to have a dramatic change. From a writing perspective it is similar to a "plot twist" except happening to a person, if that makes sense. It does not have to necessarily be a catastrophic change, which for example happened as a result of guilt or a loss, but a change which sets a person on a very different path.

The term watershed is often used for this. From Cambridge Dictionaries:

​[Uncountable] an event or period that is important because it represents a big change and the start of new developments:
a watershed event/moment
The discovery of penicillin was a watershed in the history of medicine.

The origin of its figurative usage appears to be from the geological term, where a ridge or other geological feature separates flowing water into different drainage systems. Thus the metaphor is very similar to a crossroads or fork in the road, but perhaps with less implication of a choice of path (the water doesn't choose which way to go, just like "history" didn't choose in the example above).

So for your example

After that happened George's life would never be the same; he'd reached a watershed.

would especially make sense if the event "that happened" was not of George's choosing or possibly if George did not foresee the consequences. You could also say that

[The thing that happened] was a watershed for George; afterward, his life would never be the same.

or, even more simply,

[The thing that happened] was a watershed in George's life.

Note that a watershed can be good or bad, both in the causal event and in consequences.

One common way is

a point at which a significant change occurs

But as this phrase is used regularly, perhaps it's not dramatic or impactful enough for your needs.

One notch up, then, is an

And again from Investopedia (sorry for quoting the entire thing, but I think all the points are helpful and material):

An inflection point is an event that results in a significant change in the progress of a company, industry, sector, economy or geopolitical situation and can be considered a turning point after which a dramatic change, with either positive or negative results, is expected to result.

Companies, industries, sectors and economies are dynamic and constantly evolving. Inflection points are more significant than the small day-to-day progress typically made, and the effects of the change are often well known and widespread.

Based on mathematical charting models, the inflection point is where the direction of a curve changes in response to an event. In order to qualify, the shift must be noticeable or decisive and attributed to a particular cause. This principle can be applied to a variety of economic, business and financial information, such as shifts in the gross domestic product (GDP) or changes in security prices, but it is not used in reference to normal market fluctuations that are not the result of an event. 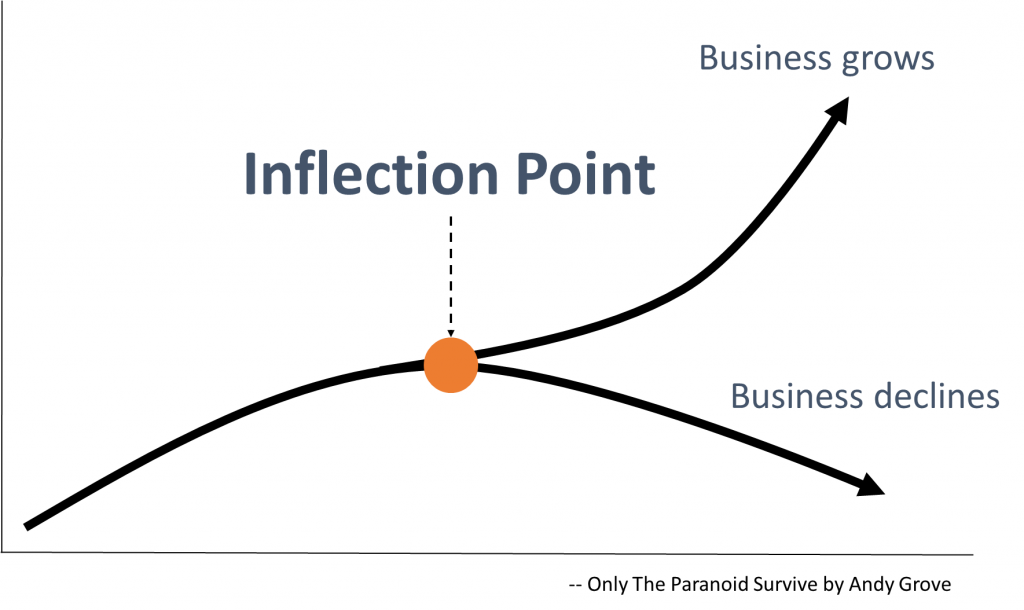 The words "epiphany," "revelation," "realization" and "turnabout" all come to mind to describe a shift in perception, however these mostly have a positive tone and I'm not sure if that is what you have in mind.

In addition to Dan's answer I would also suggest: pivot point, tipping point, changed gears, fast tracked (all these phrases used with 'unexpectedly' could create the mood that you are going for)

I would suggest "crossroads." It suggests multiple possible alternate paths, and also implies (somewhat) not turning back.

"a point at which a crucial decision must be made that will have far-reaching consequences."

In the OP's example:

After that happened, George's life would never be the same; he'd reached a crossroads

Another alternative expression might be "point of no return:"

After that happened, George's life would never be the same; he'd reached a point of no return.

New chapter. It's one that even the non-math minds (moi) can understand.

This thread is old, but might I add "revolutionary" to the list of suggestions? Obviously the sentence would have to be modified a bit, but it might suit your purposes well

What about breakthrough? It is not something you actually reach, so you should have to rephrase, but it feels stronger than "turning point", can't say in respect to "watershed", though.

DrSh4rkDrSh4rk
1
1
Add a comment  |
Highly active question. Earn 10 reputation (not counting the association bonus) in order to answer this question. The reputation requirement helps protect this question from spam and non-answer activity.

1
Verb (or expression) referring to something that happens suddenly and unexpectedly, and upsets you

6
What word means “the important events in one's life”?
3
More concise word of phrase for "to turn into a process"
3
A word/phrase meaning "to ask about a person's feelings"?
0
Phrase that refers to all the events in a person's life?
1
Word or Phrase for events that don't fall into other categories
3
A word or phrase to describe events that happen alongside major historical events
5
Phrase for daily life
1
Word or phrase for set of events with no context as to timing
0
What is an idiom for this whimsical turn of events?