I thought the article written by Charles M. Blow under the title ‘Genuflecting to the Tea party’ appearing in August 12 New York Times intriguing. He criticizes a sequence of moves of Republican Congressmen over the budget ceiling deals as the G.O.P.’s ‘obscene genuflection’ to Tea Party tenets: give no ground; take no prisoners; accept no deal.

Apart from appropriateness of the writer's view (in which I have no special interest), I was interested in the metaphor contained in the following sentence of the article:

“Luckily for the rest of us, a rash of recent polling suggests that more Americans, at least for the moment, seem to be coming around to seeing the Tea Party for what it is — not mechanics come to fix the machine, but the proverbial monkeys willing to throw a wrench into it.”

What does ‘the proverbial monkeys’ mean? Who are they? Tea Party or Republicans? If it is Tea Party (which is in singular form), it doesn’t agree with monkeys (in plural form) in number. It doesn’t matter because Tea Party is a collective noun? I don’t know. Can somebody paraphrase this section in more articulate way?

First, a definition of an implied noun:

monkey wrench:
something that disrupts <threw a monkey wrench into the peace negotiations>

The "Tea Party" is a group of people, and the implication is that the group is made up of disrupters rather than the fixers that they claim to be.

You'll find that when someone deconstructs an idiom, they will often refer to the parts of it as "proverbial", as in, "taken from the proverb".

The writing is strained, at best. Apparently he wanted to use monkeys to alliteratively parallel mechanics and butchered the idiom to do that. At the same time, there is the singular/plural dissonance you noted of Tea Party (singular, but collective) using singular construction while the detailing phrase is in plural form.

... seeing the Tea Party adherents for what they are — not mechanics come to fix the machine, but saboteurs wanting to throw a wrench into it.

The idiom referred to is:

throw a monkey wrench in the works : Fig. to cause problems for someone's plans

I believe whoever wrote the article miswrote it, merely vaguely remembering a proverb about "a monkey, and something about a wrench", therefore, he refers to it as a proverbial monkey who threw a wrench.

Of course a monkey wrench is just a type of wrench. 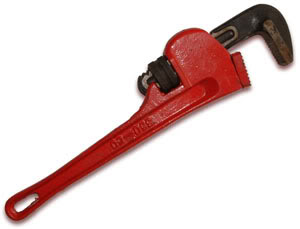 The proverb alluded to here involves throwing (or accidentally dropping) a monkey wrench into the works of a machine, which causes the machine to malfunction. Now there could be another question, "Why is a monkey part of the name of this tool?"

12
Why is it “a defeated Napoleon, not “the defeated Napoleon” who rode off the battlefield and into exile?
5
You are standing into danger
8
"The proverbial wedding ring"?
2
Is the usage of among in "Some philosophers are addressed, among who Deleuze, Derrida,..." right?
0
Is “throw guns into a hot stove” a common phrase or just one-off figurative expression?
0
What does "are" embody in the phrase "who we are"