What do you call someone who is supported?

Synonym for a supportee (Which doesn't seem to be a word)?

I created products that retail and we sell them and give the proceeds to charities. Trying to figure out a single word to use as a page title for those that we support were we can list the charities (With their permission of course).

a person or thing that receives help or an advantage from something :

one that benefits from something.

Recipient seems appropriate. Does this work for your project? 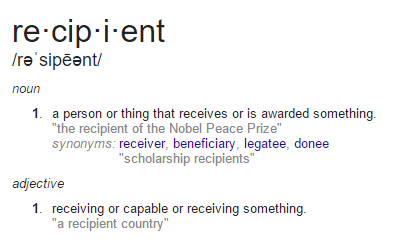 Note:'Supportee' seems singular and somewhat anonymous. "Suportees" sounds awkward and a bit silly to my ears. 'Beneficiaries' is indeed a proper word to describe these particular clients but it has a definite "business" connotation without much empathy. Given this is a charitable endeavor whose recipients are actual people who need assistance, a descriptor that has some dignity to it, in my opinion, has the most merit.

Supportee is a word. The Ngram viewer finds it's used particularly for emotional support:

Gottlieb explored several different support situations and assessed the degree to which various support behaviors are considered helpful to the supportee. (On Being Supportive: The Emotional Consequences of Listening to Another's Distress by R M Perrine)

and for physical support:

Support-edges for support relationships in the Initial State are called disassembly-support-edges. They are shown as solid, u-shaped edges. These edges are directed from the supportee to the supporter. (Intelligent robotics: proceedings of the International Symposium on Intelligent Robotics, January 2-5, 1991)

and in the discussion of tax law:

In the case of a charitable trust...an alternative responsiveness test could be met when the supportee was named, and the named supportee had the power to enforce the trust.... (Tax Planning and Compliance for Tax-Exempt Organizations by J Blazek)

Checking with the google finds that supportee has been used for product support. From the website of a desktop conferencing service:

You can use GoMeetNow to remotely support PC and Mac computers. Follow the procedure below:

3
What adjective would mean “both former and still present”, but not “original”?
2
A word for someone always defaming people whilst constantly trying to affirm their own uprightness
4
SWR for “just now”, “from my hand”, lost an object?
2
Conceptual abstract representational grouping name for values/things
8
Is there a single word that means expressing insincere kindness in order to draw attention to oneself?
1
What do you call someone who 'has' a non-material thing? (I.e. a conversation)
3
Does English have a word that only means “to create a social bond”?
1
One to two words that describe a person who guides people on a mass scale through transformation (esp. in education)