What do we call the little cape that just covers the shoulder?

The Coneheads wore little capes that just covered the shoulders. 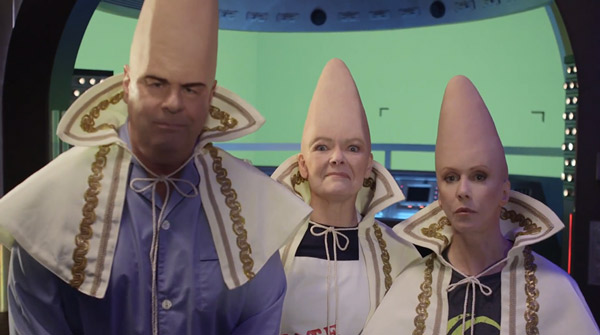 What's the word or phrase for these little doodads?

Since 1912 at least, they have been called 'capelets' according to Merriam-Webster online.

From the 14th century the word tippet seems to have been used. Merriam-Webster defines Tippet

2 : a shoulder cape of fur or cloth often with hanging ends

While I Marc Carlson's Glossary of some medieval clothing terms gives a lengthier description. (bolding mine)

[Origin uncertain; some suggest identity with OE. tæpped, tæppet, *teped (pl. tæppedu, tepedu) carpet, hanging, etc. = OHG. teppid, -ith, -it, tepid, -it: both ad. L. tapete (-a, -um) a carpet, tapestry hanging, bed-cover, table-cover. But there are great difficulties both of phonology and of sense. Others suggest a derivative of tip] 1. a. A long narrow slip of cloth or hanging part of dress, formerly worn, either attached to and forming part of the hood, head-dress, or sleeve, or loose, as a scarf or the like. Obs. exc. Hist.b. A garment, usually of fur or wool, covering the shoulders, or the neck and shoulders; a cape or short cloak, often with hanging ends. Now worn chiefly by women and girls, or by men as a part of certain official costumes. In many early quots. (omitted here), senses a and b are not distinguishable.

Since I believe this moment in the movie represents quasi-religious garb, I believe pellegrina is appropriate (although that is closely tied with the Catholic religion).

For the secular version, capelet or tippet is appropriate.

I have seen it called a Shoulder Cape, shown below on a nurse in the Australian Army Nursing Service working dress.

Other times, the cape may fit atop or into a heavy Western or Australian oilcloth coat for the cold and rain, called a duster. 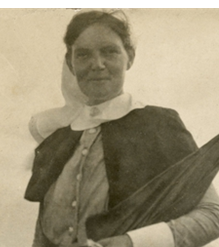