Is there any word in English for the date after interchanged day and month digit? [closed]

For example, my friend's anniversary is on 3rd August (03/08/2016-dd/mm/yyyy). If I interchange the Month and Day digit and write 08/03/2016 meaning 8th March, is there any special word for this kind of date in English? Like 'Reverse Date' or something. Ignoring the dates after 12th.

Editing: I am not confused about date formats here. Think it like, If I want to wish my friend on 8th of March (instead of 3rd August), what should I say him? Like: 'Happy Reversed Anniversary'!?

While it's difficult to prove a negative, having grown up speaking English and being fairly well-read, I feel safe saying:

No, there is no commonly used word for this that would immediately be understood by the majority of people.

Middle-endian date format appears to be the technical term, more commonly known as the US date format, see also Ngram: 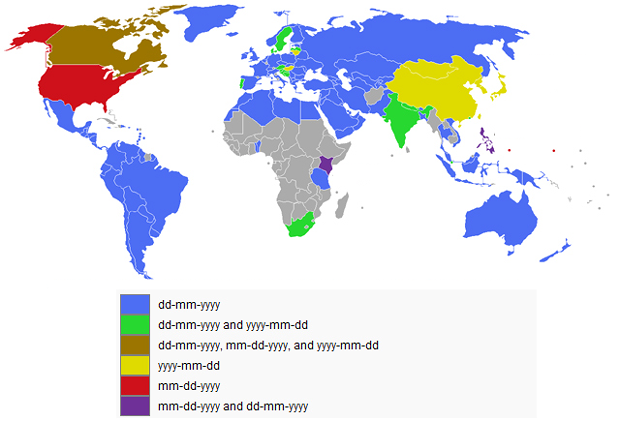 A possibility would be to call it a "transposed" birthday.

As a tongue-in-cheek in joke, I'd call this a:

UK Birthday - if you're normally using mm/dd/yyyy and transposing it to dd/mm/yyyy.

U.S. Birthday - if you're normally using dd/mm/yyyy and transposing it to mm/dd/yyyy.

These aren't widely used or 'correct' by any reasonable way, but in a joking sense I think a friend or colleague would get what you're doing in context. "It's your U.S. Birthday today!"

As has been mentioned in other answers, there's no universally understood word that I can think of (native US English speaker).

However, colloquially and in business, I've seen the dd/mm/yyyy format referred to as the "European Format"/"European Date Format".

So, you could perhaps congratulate and say "Happy European Anniversary!"

(Here's at least one use of "European Format" in practice.)

(Also, it's a little more special for those folks who got married/started dating/whatever in the first 12 days of the month. If you were married July 13, you don't get a "European Anniversary" in the US format since 13/07/20xx never comes up. )

Not the answer you're looking for? Browse other questions tagged single-word-requests dates or ask your own question.

30
Date format in UK vs US
3
When writing out month and year in words, is any punctuation necessary?