What's the best way to bowdlerize an expletive but keeping the meaning understandable?

I was writing a blog post for my website, about the etymology of the word fascist, and I wanted to write about how it's connected to the modern slang curse word for "homosexual" which used to mean "a bundle of sticks" (f-gg-t), but my ethics and, I feel, the integrity of the site would be compromised if I used such a hideous word. Thus, I used dashes as in the aforementioned example, but this brought up a good question.

While researching this, I came across an article from The Guardian by David Marsh, which raised an excellent point that too much censorship can obfuscate meaning. I also learned about grawlixes from Quick and Dirty Tips.com and What the #$@&%*! is that called?, but when there is little to no context provided, I can't really use [bleep]s or censor an entire word. I'm looking more of a method where it is crystal clear what I'm saying, without actually saying it. Euphemisms obviously won't work here.

I think the big dilemma here is this: how do I allude to a profane word while keeping maximum clarity? Do I censor all vowels, select vowels, all consonants, or select consonants? What would be the best way to allude to the above word (f-gg-t)? Is there any research or are there any linguistic papers written on this? How do I ensure maximum clarity?

Some sources that barely helped:

Correct usage of replacing cuss words with symbols (English Language & Usage)
Symbol Swearing (tv tropes)
What's your favourite way to cuss without cussing? (The EscapistMagazine)
What the Hell Do You Do About Profanity? (Daily Writing Tips)
Why do we still censor swear words? (Quora)

It is one thing to feel that referring to someone as a faggot is offensive. It is quite another to say that using the word at all, especially in the context of writing about the word itself, is offensive.

If you think it is fine to refer to the word and discuss its origins, but that actually writing it as "faggot" is morally wrong then see how far your conscience will let you go. "******" is inoffensive, but nobody will know what you mean. "f*****" is also too vague, and prone to misunderstanding.

The best way to bowdlerise but keep the meaning intelligible is to suppress the fewest number of characters which your conscience permits. It is usually easiest to supply missing vowels, so you could consider "f-ggot" or "f-gg-t". If you are still troubled in conscience you may need to consider cutting more letters out. You want your reader to know exactly what you mean though.

It is also important to be certain that your word cannot be mistaken for something else.

The football match on Merseyside ended Liverpool 2, Ev-rt-n 1 is ok, for someone who finds Everton offensive. It is unwise to give the Glasgow result as Celtic 3, -an-ers 2. On the other hand ambiguity could be useful if you describe your grandmother's sister as a great -unt.

For clarity blot out as few characters as possible, even perhaps none; unless you need to to avoid being blocked on the web.

Good news! I can save you the embarrassments of 1) bowdlerizing your blog entry with absurdly transparent orthography like f*gg*t and 2) mistakenly adopting folk etymology.

<tl;dr>
There's no good evidence to connect the etymology of fascism and faggot.
</tl>

The word fascist is from the Italian facismo, the name for the authoritarian nationalist movement that first arose in Italy during World War I. That word in turn comes from the Latin fasces, which is a bundle of tightly bound rods, sometimes incorporating an ax, that the Romans used as a symbol of office. Here's a picture.

A faggot is a bundle of sticks, originally one gathered as kindling. Like this one: 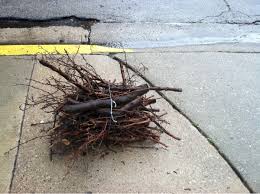 This word comes to us from the French fagot of the same meaning but, according to the OED of unknown origin. The OED also records the word as an abusive term for a woman from 1531. It would be unsurprising to find as a pejorative the transfer to male homosexuals of womanly characteristics, but that's just a guess at the origin of the slang that the OED first finds in American usage of the early 20th century.

Not the answer you're looking for? Browse other questions tagged orthography pejorative-language offensive-language or ask your own question.

31
What is the best way to explain how to choose between “its” and “it's”?
12
Where does the pejorative meaning of “shower” come from?
5
What's the correct way to write “foodservice”?
5
What's the origin of the phrase “men are pigs”?
0
What's the meaning of “finniky”?
1
Word for a word that changes spelling but not meaning?
4
What's the proper way to handwrite a lowercase letter A?
4
Is there a single word meaning “convivial, jovial” but in a way which is not pleasant to others, obtrusively friendly?