How should Samuel Beckett's French "En attendant Godot" be capitalized in MLA? 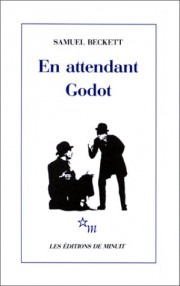