To assay, assess, measure, determine or quantify, in scientific writing?

Suppose I do many experiments, to know some unknown value, or to know how some value changes, the amount, rate or amplitude.

When I describe my experiments in English, how do choose from verbs “quantify” “assay” “assess” “measure”, and “determine”? Can these be used interchangeably? If so, it better to loop over these words à la round robin, or to stick with my favourite? Does the nature of experiment procedures matter, e.g. whether the result is obtained by visually comparing the size of two shapes, or from a machine read count?

I know there are also “find out”, and “analyse”. I think those are more general or abstract, right?

As someone has commented, you should consult the literature in your field and try to find out how native English speakers use the words in the context you require. What this post attempts to do is provide some general guidance to help non-native-English-speaking scientists understand why a particular word may have been chosen in that literature. Most of the examples I give are contrived, but some actual quotations can be added if the list thinks that this will be useful. (I shall not quote dictionaries as I do not think they will be particularly helpful for question about specialized scientific usage.)

I am (or was) a University biochemist/molecular biologist with a first degree in Chemistry and a secondary school / high school education that included maths and physics. My remarks obviously reflect the fields I work in or read about, and usage in other fields may differ. In addition, the boundaries between some of these terms (especially between ‘measure’ and ‘determine’) are not always clear-cut. My answer only attempts to provide some general guidelines. Language and usage are such that there are bound to be exceptions to these guidelines, but enumerating them would, I think, decrease the usefulness of my answer. They are better kept as comments.

‘Measure’ and ‘determine’ are probably the most frequently used verbs in the context described, and there are many situations where either will serve. ‘Measure’ is probably the less used of the two scientifically, although it is the one more common in everyday speech. Circumstances in which ‘measure’ may be preferred include:

N.B. Because of the common association of ‘measure’ with length, writing that you measured someone’s weight would sound rather strange — it would be better to use the verb ‘weigh’ or ‘determine’ instead. And you can’t say “measure the number of” — the verb is ‘count’.

Circumstances in which ‘determine’ would be preferred to ‘measure’ tend to be those in which the experimental values recorded by the instruments have to be processed to obtain the value of the variable that is being described. One might ‘determine’ the activity an enzyme by ‘measuring’ the absorbance of a solution in a spectrophotometer. In this case the reader one would probably write something like:

However ‘determine’ should be avoided in everyday speech where ‘measure’ would be more comprehensible. A doctor who tells a patient that he is going to determine, rather than measure, her blood pressure, lacks the common touch, to say the least.

In the field of biochemistry, ‘assay’ has a rather restricted meaning. It tends to be used when one is making a measurement of something (often a metabolite or enzyme) in an impure or complex mixture, e.g.

“We assayed the concentration of glucose in the blood of…”

I suspect that this derives from the more longstanding use of ‘assay’ in metallurgy, especially assaying the purity of precious metals.

‘Quantify’ is not a word that would be used in place of ‘measure’ or ‘determine’. It would be used in a general description of research to describe the transition from qualitative observation (e.g. “Look, there’s a band on the gel!”, “The litmus paper turned red!”) to adopting a procedure where one can put a number on something (e.g. 50 pmol of DNA, pH 4.7). So an example might be:

The usage of ‘assess’ is generally rather different from the other verbs here. It tends to be employed either in summarizing, or in drawing a conclusion from, data, especially when they are incomplete or drawn from different sources, e.g.

However it is sometimes used when precise values are quoted, but there is uncertainty regarding the validity of the means used to produce them:

“It is difficult to account for the difference between the values. X estimated the constant using such-and-such a method, whereas Y employed this-other-named method.”

Another situation is when one is emphasising how the results were obtained.

“We estimated the protein concentration using Bradford’s method, rather than by the Lowry method.”

You also have "evaluate", "ascertain", etc. A good dictionary of synonyms, or a dictionary containing synonyms after entries -- like MWU, a relevant extract of which I am attaching as an image -- can be most helpful. Perhaps some of the uses below are not in line with what you are looking for, but I just want to show you how seeing all the definitions -- as well as their respective examples -- together can help you compare and decide: 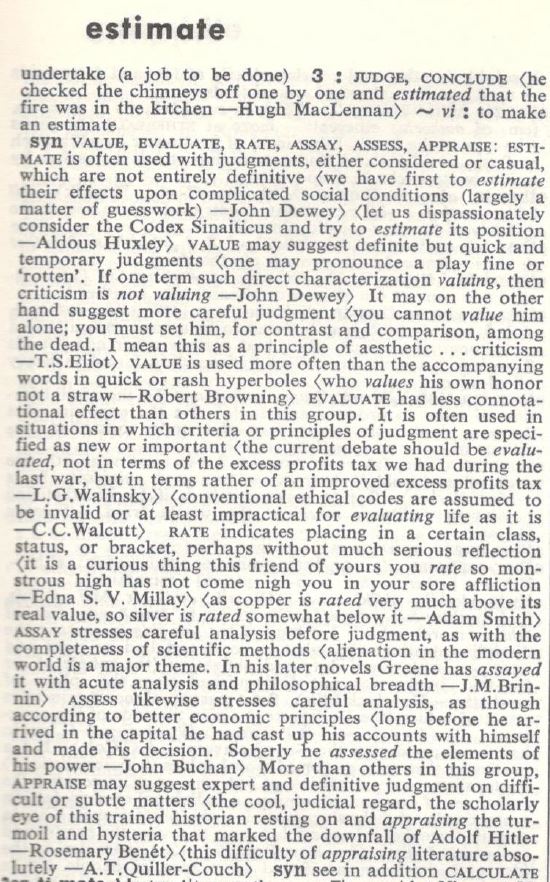 Not the answer you're looking for? Browse other questions tagged word-choice verbs science or ask your own question.