Does the orthography of a book title matter? [closed]

In a comment I mentioned a book by its cover title name, "programming the Z80". 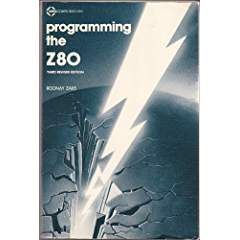 That is also the title used on the inside front cover. However, both the spine of the book and back cover refer to it as "PROGRAMMING THE Z80". The copyright blurb was no help, not even mentioning the title at all:

Copyright © 1979 SYBEX Inc. World Rights reserved. No part of this publication may be ... without the prior written permission of the publisher.

The Library of Congress lists it as "Programming the Z80 / Rodnay Zaks". Searching the ISBN online, it seems to be the same, normal "title capitalization", although I found one reference where "The" was capitalized as well. Wiley, which now owns the SYBEX brand, does not list the book as part of their catalog nor even as part of their SYBEX subcatalog.

So in addition to whether capitalization matters technically, should we strive as a matter of respect to represent the name in the way the author wished it to be? It's not that Rodnay Zaks didn't have a choice; he apparently founded SYBEX and wrote several books in a "programming the ..." series.

related: Which words in a title should be capitalized? and Confusion about book title capitalization

This section was originally an off-topic aside. I converted it to an on-topic question in another SE: Why are Library of Congress searches treated as live sessions?

The first line in Wikipedia's page for Nineteen Eighty-Four reads as follows:

Nineteen Eighty-Four, often published as 1984, is a dystopian novel published in 1949 by English author George Orwell.

On the title page of my copy of Orwell's book the words are spelled out and initial-capped—but as you can see on the above-linked Wikipedia page, the publisher (Secker & Warburg) rendered the title in two forms on the original cover: as "nineteen eighty-four" and as "1984." Neither of those seems to be the form that Orwell chose. So what is the actual title of the novel?

Ultimately, when the author, the publisher, the cover designer, and other interested parties can't agree on a consistent approach to present the title of a book, the decision about which one is correct ceases to be clear-cut and instead becomes a matter of opinion.

Technically, as far as the government is concerned, the cataloging-in-publication data in the front matter of the book may be the title of record. But my inclination is to treat the title page as the likeliest source of the spelling that the publisher/author contingent intended the book to have. Less useful is the cover treatment of the title and least reliable of all is the wording on the spine of the book. As for the flap copy and the back ad, what you see there is usually from the publisher's marketing department—and in my experience, people in the marketing department generally don't read the books they write about.

The title page takes you only so far, however, especially if you are dealing with a licensed (or unlicensed) reissue of a book by another publisher or a later edition of a book by the original publisher. If identifying a book's title comes down to deciding what part of a book to believe, then in some sense there is no single true title. And if that's the case, it seems to me, readers and other interested parties ought to be free to choose which form they prefer and call that the title.

So in the case of programming the Z80 or PROGRAMMING THE Z80 or Programming the Z80, I think, you should make your own decision about whether you prefer the archy and mehitabel world of all lowercase, the screaming ad-man world of all caps, or the traditional world of title case. And if anyone complains (which, I strongly suspect, won't happen), you can simply answer, "But that's the way it appears in [or on or at] ____________," and fill in the blank with the place where the title that matches your preference happened to appear.

Not the answer you're looking for? Browse other questions tagged orthography capitalization book-title or ask your own question.

221
Which words in a title should be capitalized?
1
Confusion about book title capitalization

2
What does the phrase “DV-Undefined” and the phrase “DV-MPS General” mean in book titles
9
Meaning of “cookbook” in title of instructional book
0
Formatting a Title of a Book within a Book
0
Is it OK to omit one “the” if there are two in the title of a book/story?
3
Book Title With Exclamation Mark Followed by a comma
0
“Speaking Likenesses” - what does the title mean?