To be specific, I am talking about "easily" as in requiring little effort. "Hardly" obviously has a meaning that's quite different from "with much effort", although quite often things that require much effort are also hardly doable, but there are differences, e.g.

With much effort, they won.

seems, at least to me, to be quite different from

Is there a word that is an antonym of "easily", and means "with much effort" or "with difficulty"?

I'm pretty sure the exact antonym of "easily" is "with difficulty", i.e. the word you're looking for doesn't exist and most one-word suggestions you'll get will be approximate antonyms (like "laboriously", which as pointed out elsewhere puts much more weight on the process of doing the thing than "with difficulty" or "easily" do).

The OED clearly recognises the word difficultly, though it can imply different things.

1 a. Not easily or readily; with difficulty. 2014 D. Renee Cinderella Not xi. 56, I told myself it was going to be okay and very difficultly tried to calm myself.

1 b. So as to be difficult to understand; in a complex manner; obscurely. Now somewhat rare. 1988 Sunday Tel. 9 Oct. 20/8 Mr Vansittart's difficultly intricate but richly rewarding mythological novel.

1c. So as to be difficult to deal with. 2010 Dunoon Observer & Argyllshire Standard 25 June 23/1 The course was playing as difficultly as it had been for the previous week's Argyll and Bute team trophy.

1d. So as to be in an awkward or delicate position or situation. 2014 Frontier Post (Nexis) 9 July By every indication they are far more difficultly placed in Afghanistan.

Clearly it is not 2. And I don't see much difference between 1b and 1d. But for your example there would be nothing wrong with your using the 1a sense and saying "Difficultly, they won". But it would be rather unusual. The more current way of saying it would be "With difficulty, they won."

"Laboriously, they won" is a bit of a strange sentence though.

"It was an arduous process, but they won."

(links to Oxford dictionary pages for other uses)

I think effortfully has the meaning you're after, and seems to be gaining in usage; it is somewhat clunky, though, and still isn't very common.

effortfully adverb
in an effortful manner
Once effortlessly different, the series now often feels effortfully so.

(effortful is defined as "requiring effort")

effort
2. uncountable noun
If you say that someone did something with effort or with an effort, you mean it was difficult for them to do.

This adverb has apparently been gaining in usage in recent decades; the OED has a draft addition of the adverb dated 1993, with four citations from 1961 to 1984. There also appears to be an upswing in usage in Google Ngrams data (with the usual caveats): 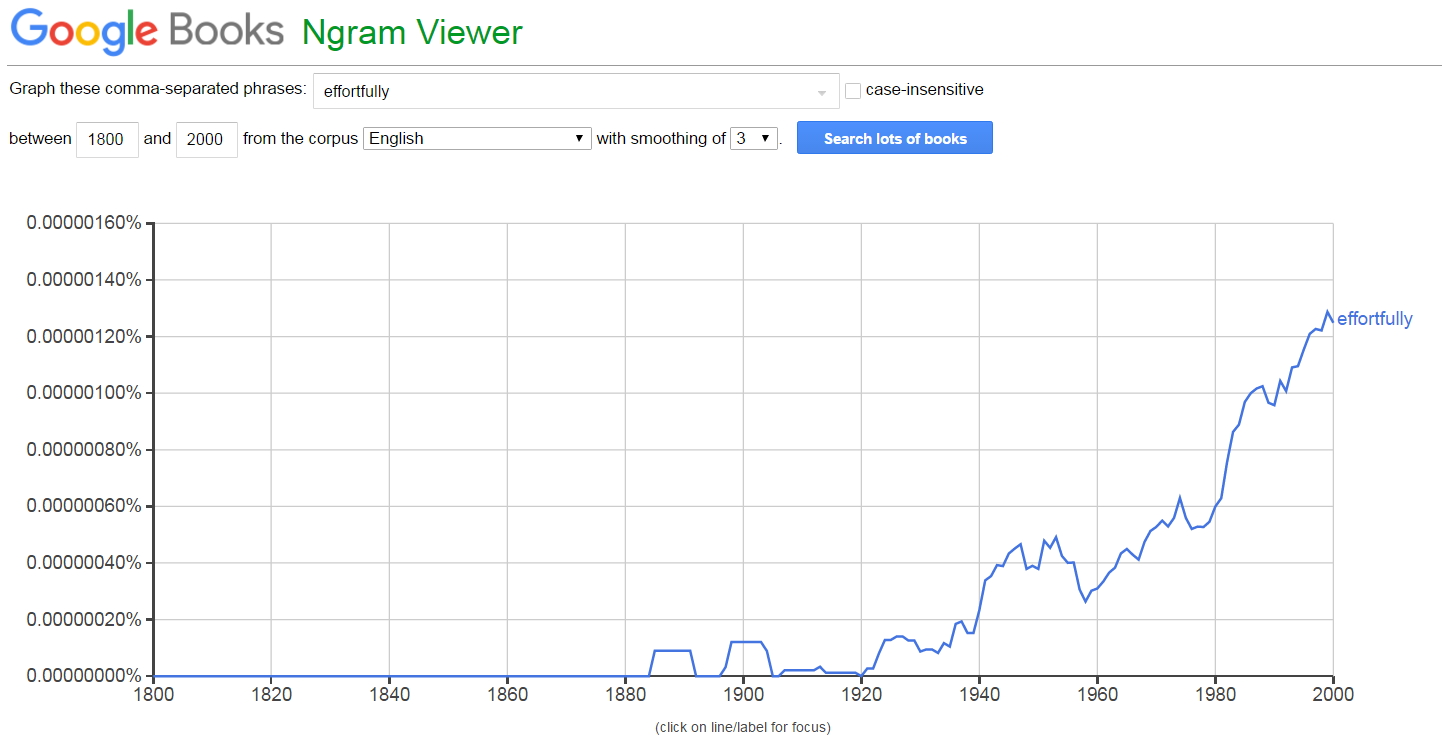 Note that while the rate of use has increased, it's still a tiny absolute number of usages. However, I suspect the general upswing in use reflects a desire for a single-word alternative to phrases like "with difficulty" or "not easily", which are far more common overall but have been declining in usage over the past century (ngram).

In a way that takes considerable time and effort.

‘the boys were laboriously copying down sentences from the blackboard’

‘she breathed slowly and laboriously’

Not the answer you're looking for? Browse other questions tagged single-word-requests adverbs antonyms or ask your own question.

2
Something between leverage and balance
18
Are the words "sillily", "uglily", "friendlily", "livelily", etc., valid English?
1
Antonym of "Portable" in the context of a computer programme?
5
Term for 'earth-like' species
0
Is there a technical name, grammatically, for the use of "it" in a non-specific way?
2
Light bulb on a bare/poorly-executed/dangerous wire
7
question tags with or responses to "Seldom/Rarely/hardly" statements?
3
Are there any pairs of English words that are cognate to each other yet have opposite meanings?
0
Is the word "finicky" appropriate to describe fine, important, details, that may escape the inattentive eye?