A pronunciation question of slough

So I see there is another question asked here before about the different pronunciations of -ough but my concern is not quite the same.

So I am preparing for my presentation tomorrow on interesting facts about the English language and I would like to talk about the different pronunciations of -ough. I came across this image online that is a popular example for the various sounds: 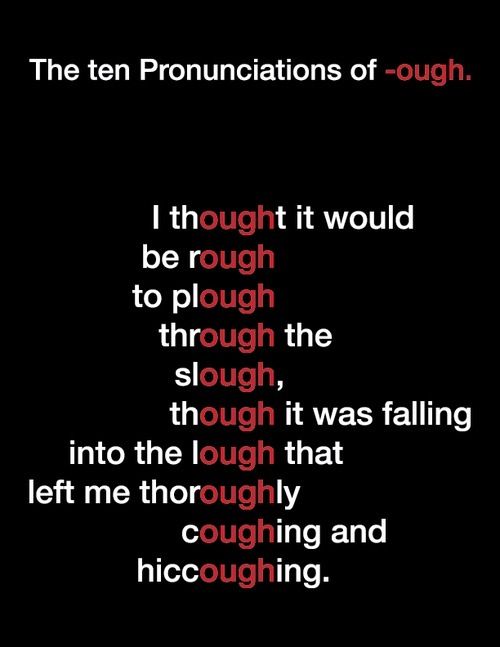 Supposedly, the -ough in every word sounds different. However, I don't see how slough and plough are different. If they intend to use the pronunciation of slough as in "sluff", then I don't see how it is different from rough. Even if they mean "slew", it rhymes with through.

So how does it bear a unique pronunciation? Can any experts here shed some light?

There are multiple pronunciations. See Google's answer, which Google presents from The Write at Home Blog.

Slough pronounced sluff is the term for shedding skin, like snakes do. Slough meaning wet, swampy ground can be pronounced either sloo or slou (rhymes with cow). Dictionary.com prefers slou, while the American Heritage Dictionary prefers sloo.

The question originally asked specifically about the accuracy of the claim that in this sentence, each occurrence of the letters 'ough' had a unique pronunciation.

A rough-coated, dough-faced, thoughtful ploughman strode through the streets of Scarborough; after falling into a slough, he coughed and hiccoughed.

This website uses the same example sentence, but both has a recording of the pronunciations and highlights in bold text the eight different sounds it claims.

A rough-coated, dough-faced, thoughtful ploughman strode through the streets of Scarborough; after falling into a slough, he coughed and hiccoughed.

'Slough' isn't bolded, so not thought by those authors to be an additional pronunciation. This can be verified by listening to the recording, which uses the same sound in 'slough' as in 'plough'

Note also that the site uses British-English pronunciation and that Scarborough rhymes, here, with 'thorough' rather than 'dough'.

The edited question contains a contrived sentence which also includes the word 'lough', and other examples have been cited in comments which include the surname 'Coughlin' and the placename Poughkeepsie as examples of additional pronunciations ('ock', 'og' and 'uh' being the claimed pronunciations). These three examples are all loan words, 'lough' and 'Coughlin' from Irish-gaelic and 'Poughkeepsie' from the Native American language, Wappinger.

Loanwords should be treated with caution when discussing 'english language' pronunciations, as their pronunciation is unlikely to match the source language pronunciation accurately and will provide no clues to pronunciation of 'non-loan' words.

Note that some words may have different pronunciations in different dialects; 'sough', meaning 'to sigh as the wind does' is given as 'sow' or 'suf' in Chambers Dictionary, with a note that Scots pronunciation is given as 'sŭhh' (explained as 'ŭ = good' and 'hh = loch') NB Chambers online does not seem to give pronunciation, I'm citing their mobile App.

Slough is an industrial town west of London. And its name is pronounced to rhyme with cow.

Often the butt of jokes, this home to the Mars Bar factory sits awkwardly among more chic environs, such as Burnham Beeches, Windsor, Ascot, Eton etc.

The poet John Betjeman, in a work on industrial desecration in 1937, wrote

Come friendly bombs and fall on Slough, It isn't fit for humans now, There isn't grass to graze a cow. Swarm over death.

To rhyme with cow is exactly how the OED audio pronunciation of the noun slough sounds. And that is how it was pronounced by my teacher who, when I was of a very young age, introduced me to John Bunyan's Pilgrim's Progress and the slough of despond.

Not the answer you're looking for? Browse other questions tagged pronunciation rhymes or ask your own question.

25
New Zealand pronunciation of "women" vs "woman"
3
How is the word "Cactaceae" pronounced?
2
Pronunciation of Gala in different circumstances
1
Are there standard words for representing pronunciation?
1
Does word pronunciation change when it's in a sentence?
3
How to write Spanish Vowel sounds into English?
2
U.K. regional anomaly in pronouncing -ought
4
Pronunciation of the possessive form of singular nouns ending in “s”