This term is surprisingly old, dating back to at least 1905. It appears to originally be a diving term: 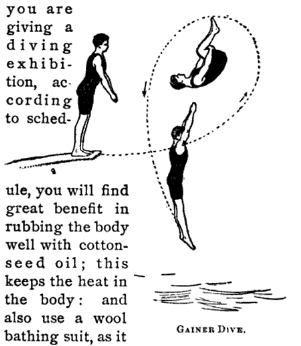 Toes pointed toward the water. This is half a turn more than the come back dive.
Health: A Home Magazine Devoted to Physical Culture and Hygiene, Volume 55

I am not sure why it was called a gainer, but this at least answers the when.

The term would be adopted into other sports later on (like skiing and gymnastics) but diving is where it started.

The idea behind a gainer is that the diver is doing an action that would move backwards from a stationary stance (like a backflip or backward somersault), but the jumper is moving forward throughout the move rather than jumping backward off the board. In other words, it requires gaining forward distance and momentum (as if for a forward flip) and flipping against the direction of motion. Here's a general description that captures the gaining being counterbalanced with the backflip:

To do a gainer off a diving board, you'll have to jump up forward and then rotate backward to do a backflip, entering the water feet first.

This is technically difficult because an inexperienced diver may cut short their forward distance and not sufficiently clear the diving board.

The first attestation in the Oxford English Dictionary is from 1898 in the newspaper Arkansas Democrat (now Democrat-Gazette), from April 16, page 6. It's interesting because it separates the action of gaining from the somersault:

Schuyler turns a back somersault ... & a flying gainer somersault from the same height, which is said to be the most difficult feat ever attempted by any diver.

Five years later, here's a description in the Philadelphia Inquirer (vol. 129, no. 12, 12 July 1903) of another diver, Dana Thompson, performing a leap from a 90 foot tower. Note that Thompson gives a comprehensive explanation of what it means to gain:

Thompson names it the Gainer Back Somersault, because he gains on himself as he leaves the platform, jumping out forward, six or eight feet, before turning a complete backward somersault in his descent.

So the action of the jump (the gainer) and the rotation (the somersault) is separate here and in some later descriptions, but as Laurel's answer adeptly showed, by 1905 gainer sometimes stood for the whole move ("the Gainer dive") and today it customarily functions that way.