Is it proper to use “a drop” in such a manner?

I recently had a discussion with a colleague regarding the phrase "a drop". We came up with the following two examples:

Can we change the meeting to a drop later?
Can you move the tab a drop over?

I thought the questions sounded okay, yet my colleague had never heard of the phrase used in such a manner.

In the two example, "a drop" is basically used as a substitute for "a little" or "a bit". It may not be the best word choice, yet is it okay to use "a drop" in such a manner?

Are these sentences grammatical? Is this kind of usage of "a drop" considered slang?

Yes, the usage is grammatical, and in my opinion most listeners would understand (maybe from pure context) what you mean. That is quite a low bar. In my experience this usage is not slang; I have heard it extremely rarely, if at all. Note, you would also be fighting an alternative meaning of "drop over", which is "to stop by for a short time".

I am not being critical of your question, and even up-voted it. Personally I would feel that the problems encountered in the phrase's use would be a drop over what I would be willing to face.

I decided to ask Mr. Ngram what he thought on the matter: 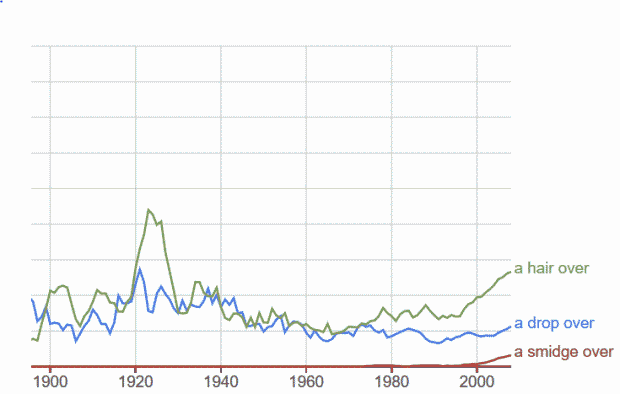 I chose three like expressions. I took out "a bit over" because it dwarfed the other three. The normative expression, "slightly over" greatly exceeded even that. The one thing that surprised me about this graph is that I had thought "a smidge over" had a quaint air, as if it were an old-time expression. Apparently not.

Can we change the meeting to a bit later?

Can you move the tab a hair over?

One should be sure of the expression before using it. Sometimes using an expression that isn't common can add interest to writing or speaking. But it should be a sparing use. This was a good question to ask.

Not the answer you're looking for? Browse other questions tagged phrases expressions usage phrase-usage or ask your own question.

2
“cat washes its face” using two words?
3
Is this a correct English sentence: “I'm not quite well enough ready yet.”
5
Usage of adverbs like reasonably, practically, essentially, ridiculously, basically
1
Use of 'such as themselves'?
8
Is there any difference between “I'm sat” and “I'm sitting”?
3
proper use of “to scale”
2
Usage, construction and origin of “make do (with)”
3
When is “he is on the” + verb allowed as a sentence?