Why are there so many words of apparent (Middle) Dutch origin in English?

I've observed over many occasions of looking up etymologies for words that so many words that entered English during the Middle English and Early Modern period (I don't know the figures) were of Middle Dutch origin, according to linguists. This really surprised me, as besides trade links, I don't know of any particularly close social, cultural, or political ties of England to the Low Countries until the late 17th century. And so many of these words are common, everyday words. (Again, I can't name any off-hand, but perhaps someone could contribute a few.)

So, what could be the reason for this large of influx of common words from Middle Dutch? My gut reaction was that perhaps the etymologists just got it wrong in some of these cases, since with English and Dutch both being Low German languages (within the West Germanic Branch), there's a chance a certain word went completely unattested in surviving texts until relatively late.

Nearly half of these words (not to mention others, like buoy) seem to be related to seafaring or fishing:

And one can imagine that many of the others might have come into the language through sailor's lingo.

Maybe you should narrow down the question to: how closely did Dutch and English sailors interact in the Middle Ages? Maybe fishermen moonlighted as smugglers back then, and got to know their Dutch counterparts fairly well. Or maybe some ships had multinational crews.

What about the Flemmings?

They spoke Dutch and lived very close to England (see map). According to "Flemings in the Fens Research Association":

The County of Flanders is the small yellow blob south east of England: 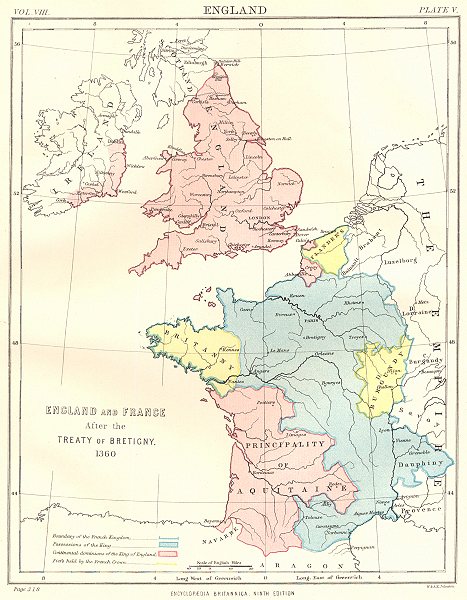 Not the answer you're looking for? Browse other questions tagged etymology middle-english or ask your own question.

4
English words of Latin origin: Did they replace existing words?
1
Why are words like "Thou" / "Thee" / "Ye" no longer used in English?
6
What is to be made of "e" ending so many Middle English words?
2
If you had a list of common words from Middle and Modern English, how many words would have been replaced?
1
Why are there are so many words for "zero"?
3
Do words with "ij" (strijf, whijt, prijs, wijf, lijf, lijk, chijld) relate to Middle English?
1
How many English words are of native origin?