Why do North Americans pronounce "caramel" as "carmel"?

"Caramel", which (clearly) has an "a" in the middle, has only this spelling world wide.

Can this difference in pronunciation be traced to a root cause?

Caramel appears have different pronunciations in different English dialects, the AmE one is just a variant which has been in place for a long time: 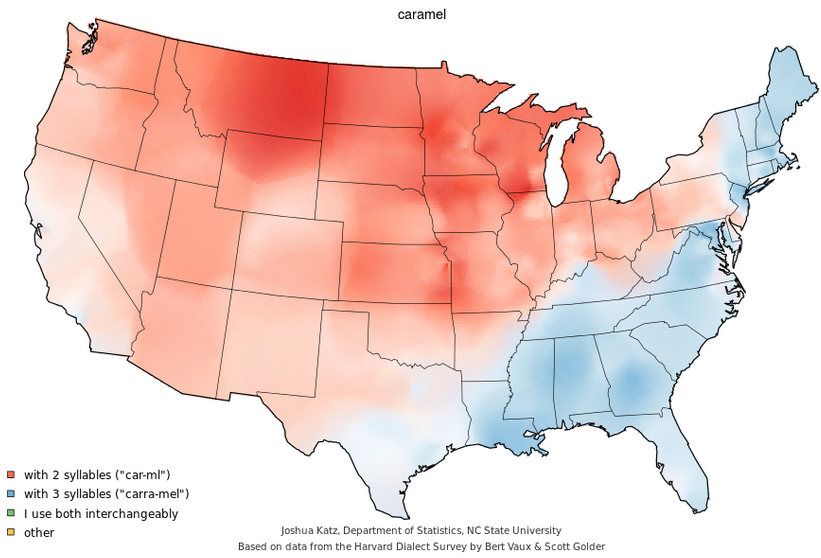 Americans don't all use "carmel". Many of them think it's more correct to say "carr-a-mel", so you can find a number of examples of this pronunciation being used, especially in formal contexts. Go through some of the Youglish US pronunciations of "caramel".

There is a word where a similar syncopated pronunciation is, as far as I know, universal for American English speakers: squirrel.

Phonetically, squirrel may actually be one syllable or two, probably in part due to uncertain syllabification of word-final /l/ after /r/. But the identity of the rhotic vowel (/ɜr/ as in "fur" rather than /ɪr/ as in "mirror") suggests that this word may have been underlyingly compressed to one syllable in the historical ancestor of the pronunciation that modern American English speakers use. (I'm not certain that the change in vowel quality is related to syllable structure, since "syrup" also shows a variant pronunciation with /ɜr/ in American English.)

I don't know of any other examples besides these two, though. (Unless you count iron = iern, which occurs also in British English, and the less common irony = ierny.)

I don't know what caused these pronunciations to be established only in North America. It seems possible that the presence of rhotic vowels somehow contributed; in most British accents it would be impossible to have "r" in disyllabic /kɑrməl/ or monosyllabic /sqɜrl/, since "r" at the end of syllables has been converted to mere alteration of the length or quality of the preceding vowel (the pronunciations would instead be /kɑːməl/ and /sqɜːl/; compare Mount Carmel /maʊnt kɑːməl/ and pearl /pɜːl/).

7
Why is "medicine" pronounced differently?

6
L in the middle of a word: dark l or light l?
9
Can you hear the difference between 'Writer' and 'Rider'? Why?
10
Do Americans who have the cot–caught merger pronounce 'all', 'tall', 'Paul', etc. with the same vowel quality as 'lot'?
7
Why is "medicine" pronounced differently?
0
Do some Americans in the Midwest pronounce "sorry" similarly to Canadians?