Well, I don't know how or why, but until a week ago I had never come across the initialism RBF. I read it in a comment that had a very nasty tone, like so many of the comments posted nowadays on social media, so I guessed it had to have a negative slant.

The target? A young North American woman currently working in television. For what it's worth, she's attractive-looking, slim, and appears to come from a good family.

Finding it impossible to work out the meaning of RBF on my own, I asked Google and found a Wikipedia page containing the following information.

Resting bitch face, also known as RBF or bitchy resting face, is a term for a facial expression (or lack thereof) which unintentionally appears angry, annoyed, irritated, or contemptuous.

The initialism appears to be sexist, and offensive because of the word bitch. Which Merriam-Webster defines as

And, as I discovered two years ago — to my chagrin — bitchy is an emotionally charged expression on EL&U, far more than I had anticipated, when I posted a question with that adjective in its title. In the end it was rewarded with 9 downvotes.

Although the terms bitch and bitchy are not compliments in the UK, they are (or were) less loaded. Dog breeders, and dog lovers use the term bitch for female dogs, as is only right and proper. I doubt whether the following title, first printed in 1988, The Book of the Bitch: A Complete Guide to Understanding and Caring for Bitches, would be possible in the US.

Thanks to Breaking Bad, we (non-Americans) know that bitch can be directed at both genders. But would an American English speaker describe Conan's relaxed face as being bitchy? 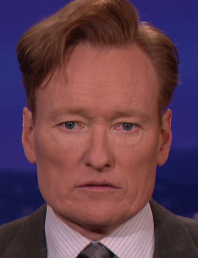 He might look sour, grumpy, tired, drawn, or depressed but a “bitch face”? I don't think so.

And an article on CNN reports,

RBF first gained attention when a meme took over the Internet in 2013. That, plus a viral mock-public service announcement on "Bitchy Resting Face" made the "condition" somewhat of a joke.

The YouTube video, Bitchy Resting Face, posted 22 May, 2013, is a parody of those TV commercials which talk about pseudo afflictions and disorders.

The Guardian, a British paper, dedicated an article to the neologism in July that year, stating

The real cause is that it wasn't coined until – amazingly – May of this year. Needless to say, it instantly grabbed the media's attention. Truly, a titbit with such potential for female anxiety and self-loathing is like an iron filing to the media's magnet.

The weirdest thing is the BRF does not actually exist: the video that coined the term was made by comedian Taylor Orci and is a joke, as some of you might have guessed from the very name BRF.[sic] Yet this has not stopped plastic surgeons eagerly offering cures for this non-existent problem.

However, digging around, I found a teen magazine online called xo Vain, and an article by Olga, dated April 10 2013, in which she wrote:

I've been afflicted with chronic bitchface for as long as I can remember. The first time a girl said to me "You know, I really don't like you, but now that we have to work on this project together, I'm having so much fun with you," was in the third grade. I was eight.

On the very same day, a YouTube video by Madeline Mann, entitled: “My Struggle With Resting B*tch Face”, was posted. In the video she utters the initialism, RBF, and confesses earnestly to the camera

So, erm, this song is about, er... well, I've been told that I have an RBF, which is a ‘resting bitch face’. And that pretty much means — like my friend once told me that he would never come up to me in a bar because I just look so freakin', like I would just—like, bite off his head.

Digging further, I discovered what might be the predecessor of RBF, the term chronic bitchface. The British blogger/illustrator, Kristina, mentions it in her post dated March 26th, 2011, two years before “resting bitch face” had became viral. 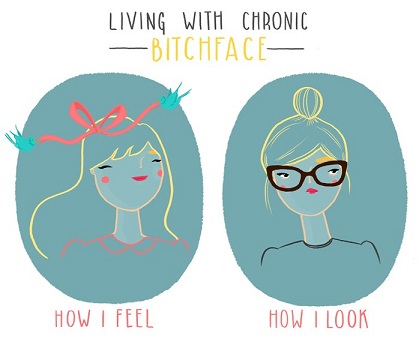 Just doing my bit to spread awareness for this common, but little understood condition. Thousands around the world are affected by chronic bitchface, with sufferers having to endure being told to “SMILE” and “cheer up” by well meaning, but irritating strangers. There is no known cure.

Research:
1. Resting bitch face (Wikipedia)
2. A Wordnado of Words in 2013 The New York Times
3. Resting bitch face' is real, scientists say CNN (February 4, 2016)
4. Non-derogatory word/phrase analog of "bi**** resting face" but for a young kid (EL&U)
5. Bitchy resting face: must it be taken so seriously? The Guardian
6. Does My Snobby Face Make Me Less Attractive?
7. My Struggle With Resting B*tch Face (YouTube)

The BRF video is my first exposure to this meme, but as an American and Texan I have encountered references to this phenomenon (if not the specific acronym) far earlier than the mentioned dates. In light of that, in my experience RBF is mentioned as a way of adding humor to an awkward situation of misunderstanding or in defense of a person seen as having a cold personality without the accuser having yet met that person. It is a description of a condition, not normally a personal attack. It is normally used as a way to defuse situations, and as such is not generally seen as offensive.

However, if someone in the conversation uses the phrase "Resting Bitch Face" with persons who are not familiar with the phrase it may then provoke offense by the listener for having uttered the word "bitch", and further misunderstanding may ensue. This is especially likely in cases where conversationalists happen to be from the southern United States, are especially religious, in an older demographic, or any combination of the previous.

To clarify earlier encounters: As a US Southerner I am accustomed to hearing the essence of the RBF spirit worded in a variety of colorful Southern expressions. For instance, when a woman here is told she would look prettier if she smiled, common responses might be (all most likely uttered while walking away):

Or the military version: "Duly noted."

I am told there are similar (more biting) versions used in the Northern United States.

Though (as stated) I am not British, I have not yet seen anyone from Britain any similar acronym or phrase in traditional or social. My roommate (also American) is a writer for a prominent David Tennant fan club and has not mentioned any such occurrence. Both myself and my roommate have heard such usage in Scotland and Ireland.

Regarding the first appearance, the first recorded instance appears to be a submission on the Urban Dictionary on August 18, 2009. The related KnowYourMeme site appears to still be researching the topic.

Not the answer you're looking for? Browse other questions tagged american-english slang offensive-language or ask your own question.

1
If we use "fairy" in our band name, will people think of sprites or gay men?
0
What is a "plumber's wife"?
4
Does "selfie" refer to the picture's taker, the picture's poster, or both
35
Derogatory term for a corporate employee
3
Non-derogatory word/phrase analog of "bi**** resting face" but for a young kid
10
“turnt” and “turnt up”
10
Is there a term for words which are insults but not vulgar?
13
Is "Fredo" an insult to Italian-Americans?
1
Origin of machine term "Sawmill N—er"