Is the word “Dance” a noun in “Dance Class”?

I went to a new dance class.

is the word dance a noun or an adjective, or something else?

The answer is that "dance" is a noun functioning as a modifier. Nouns can be modified by a range of expressions which we call "modifiers". Modifier is a function which in a noun phrase can be realised by an adjective ("a long letter"), a determinative ("another two candidates"), a noun (a brick wall) and even a verb ("a sleeping child"). We obviously don't want to call them all adjectives; instead we label them modifier while retaining their individual word categories (parts of speech).

Below is a tree diagram of a sentence containing the noun phrase "dance class". As can be seen, each unit is given two labels: the first indicates their function (subject, predicate, modifier etc.) and the second gives their category (verb phrase, noun, adjective etc.)

Note that "dance" is given the function label "modifier" and the category label "noun" (not adjective). This system is the accepted way of analysing and labelling phrases - their heads and dependents - by function and category. 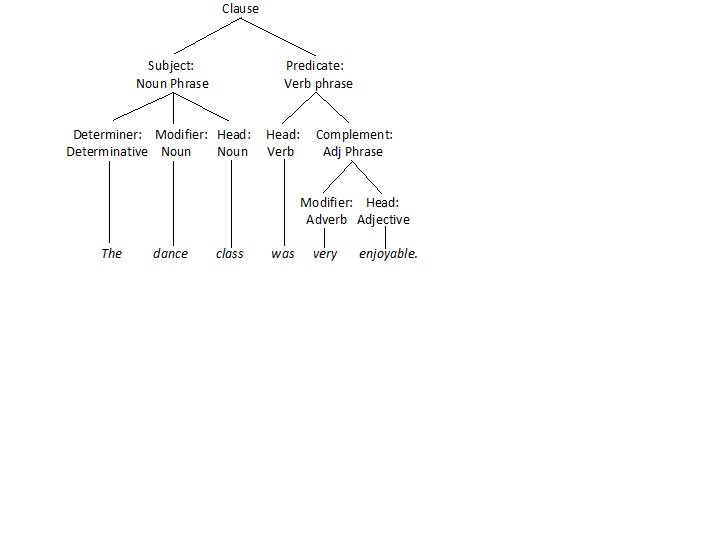 Not the answer you're looking for? Browse other questions tagged nouns parts-of-speech or ask your own question.

35
What is the lexical class of the word 'worth' when used in a sentence like “Is this apple worth $3?”
2
How to use “new” as a noun?
3
Which lexical class does “wont” fall into in this sentence?
2
What's the part of speech of the noun after 'twice'?
4
Identifying the class of this word
1
What part-of-speech is “running” in this example?
0
What is the “class-noun” for online and offline?