Origin and history of "spinning jenny"

The origin of spinning jenny (the cotton-spinning machine invented by James Hargreaves) always seemed to me to be named after a person called Jenny. However, as I was reading Etymology for Everyone by Anatoly Lieberman, the author proposed two origins.

It "is said to have been so named by the [inventor] after his wife, Jenny."

However, it was further suggested that

"It is a 'corruption' of gin, a contraction of engine. Gin would easily suggest Jin, Jinny, and Jenny."

Clearly, spinning can't be disputed insofar that, as the prefix, it comes from the word spin, but my question here is about the origin of -jenny:

Does it mean "engine" or is it as innocuous as it appears?

An article on revolvy.com stated that "parish registers show that neither [the inventor's] wife nor any of his daughters was called Jenny". Could gin be corrupted this much over time? Any help?

Jenny looks very much like a proper name, and the Etymological Compendium: Or, Portfolio of Origins and Inventions says that Jenny was the name Sir Richard Arkwright's wife, not the name of James Hargreaves's wife.

Sir Richard Akrwright was a barber who improved the spinning wheel invented by James Hargreaves and made a fortune as a manufacturer.

Etymonline supports the same view, but doesn't rule out a possible curruption of the term "gin": 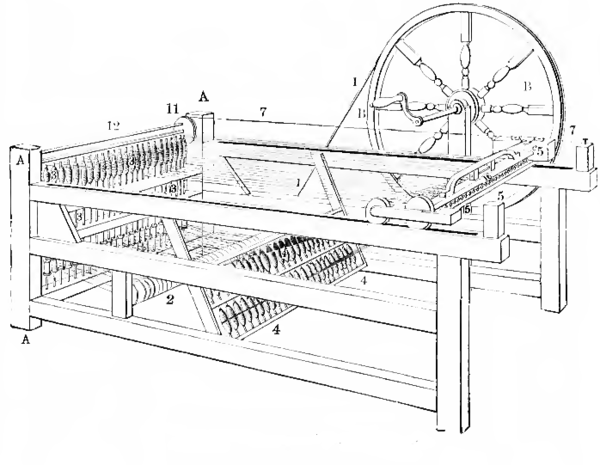 The improved spinning jenny that was used in textile mills (Wikipedia)

Okay, I have no proof of this, but it is a beguiling notion that the name could be related to the Scottish term jennie

if spinning is seen as a feminine industry (hence spinsters and distaff side) then something as masculine as a machine to help with it, might fall into the blurry male/female hinterland which this Scottish term seems to cover. But there is an equally beguiling notion in the next definition of jennie in the Scottish National Dictionary, which is

and which might be poetically attributed to the form of the Fly Wheel.

Not the answer you're looking for? Browse other questions tagged origin-unknown or ask your own question.