The term sister is often used figuratively to refer, for instance, to a “sister company” for a company within the same group, or to a “sister site” for sites that belong to the same family. This connotation as explained by the Cambridge Dictionary means:

This usage appears to be common with things that are regarded as feminine and are associated, as if by kinship, with other similar things that belong to the same group. An early usage example of this is the "sister" referred to ships:

In other instances, the "feminine" issue is less explicit as in the case of internet sites, so I guess this usage has to do with the fact that English is less gender specific when it comes to things or abstract entities.

'Brother company' - or 'brother (anything)' - would almost certainly be considered incorrect (in English). There's no logical reason why it should be incorrect, only historical.

You're right that the first usage of "sister (object)" was probably for ships. I can't find anything earlier.

We use 'she' to refer to something which we have so much affection for that it almost seems rude to refer to it as 'it'. A common usage today is people referring to their cars as if they were female.

When this usage first arose, men dominated society and certainly dominated both ship-building and seafaring. Men, generally, have an affinity for women and so its only natural that they would start to use the pronoun 'she' for something that they were similarly fond of. For long periods at sea, men might feel nurtured by their ship - a quality that we generally associate more with women.

It's possible the usage directly transferred from ships to companies but I see this as quite speculative. It's a nice idea, though.

The first proper companies were formed to finance sea voyages. Each company was formed for a single ship voyage and dissolved at the end. Since the ship basically was the company, the usage of "she" for the ship transferred to the company itself. Thus we now have sister, daughter, etc. companies.

This is probably also at least partially a cultural thing. Other cultures do not necessarily want feminine qualities associated with their corporations. They would prefer for their companies to embody more traditionally masculine characteristics like strength and solidity. Supposedly in China companies are more often referred to as masculine, for example.

With a growing pressure to avoid using gender-specific language, I expect the usage of phrases such as 'sister company' to decline in favour of more neutral terms such as 'subsidiary'.

It happens that "sister" (and "mother" and "daughter") are used for relationships between various inanimate entities - ships, companies, schools, monasteries, languages - and not "brother" or "father" or "son". This is simply a fact about English, with no obvious explanation.

I'm dubious that this has anything at all to do with the use of "she" for ships and countries, but I may be wrong.

The answer as to why the term brother is never used in context with belonging to the same group, class, or organisation could lie in biology.

Women bear children, they are able to generate, and create new life. Likewise, if a company expands and creates (procreates) a new company, that "baby" company is related to its parent.

From Text-book of Botany: Morphological and Physiological, 1875, an illustration showing the protruding cell-wall containing the daughter-cells. 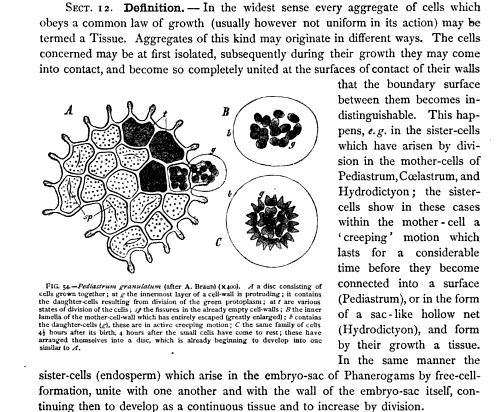 B the inner lamella of the mother-cell-wall which has entirely escaped (greatly enlarged).

During the days when philosophers used to debate, they tended to regard reproduction as a feminine trait. So naturally organisms/cells capable of producing offspring are also given a feminine trait. The parent cell is often called the mother cell, and the daughter cells are so named because they eventually become mother cell themselves.

Thus a sister site can be created or set up, and the main site is said to be the parent. Radio and TV stations, own sister stations and channels. This dispels the concept that the feminine pronoun is used as a term of affection. In a historical context, there is nothing cosy or affectionate about being ‘owned’ by a larger company, although it is in the parent company's best interest that their "daughter company" is equally successful.

An excerpt from The Naval Chronicle (including the biographical history of the Royal Navy of the United Kingdom), written in 1813, shows that the term sister ship was firmly established by the 19th century, also note the feminine pronoun used.

She is the sister ship [A French ship named Andromaque], in every respect, to the Weser; for their keels were laid down on the same day; they were launched the same day; sailed the same day ; were dismasted on the same day; were brought into Plymouth on the same day; and had a similar number of men, and weight of metal. The capture of these two vessels may perhaps be considered as doing Buonaparte a favour, inasmuch as it may spare him hereafter many unpleasant recollections attached to their names.

The excerpt illustrates perfectly the meaning of sister ship in that period. Today, the International Maritime Organization includes the following characteristics:

The earliest example of sister ship I found on Google books, was its plural form, in a French-English Naval dictionary, titled Vocabulaire des termes de marine, printed in 1799.

All of which may appear to contradict my earlier statement, but I don't think it does. The term sister is derived from biology, and in the shipping industry, it refers to a ship built at a later date but following the same design and specifications as the "older sister ship". The parentage (mentioned by @BaconBits in the comments below) is the same, therefore any ship ‘created’ in the same yard, with the same hull, a similar weight, and equipment etc. is, in a figurative sense, a sister.

(Answering your question "could brother be used instead?") The OED says:

brother, n. IV. 10. A thing perceived as resembling, or having a close connection to, another or others.

1830   Tennyson Isabel in Poems 8   A clear stream flowing with a muddy one, Till in its onward current it absorbs..The vexéd eddies of its wayward brother.

The use of "sister" for a related item has been common since the 13th century, and seems to be independent of the gender of the noun.

IV. Something which is closely related to another thing.

9. Something having a close kinship or relationship to another; something belonging to the same class or group. Sometimes personified.

a. With reference to an immaterial thing, esp. a quality, emotion, or behavioural trait.

b. With reference to a material thing, place, etc.

a1500 (▸c1477) T. Norton Ordinal of Alchemy (BL Add.) (1975) l. 2320 (MED) Quycsyluere..wil nevir cleve to a thing But to metal of oone kind or odyre, For there he fyndith sustir or brodyre. [Quicksilver (mercury)... will not stick to anything except to a metal of one kind or another, for thatis where he will find a sister or brother.]

Sister, in this [attributive] sense thus pre-dates the nautical influence.

†10. Nautical. Any of various items of tackle having two or more matching components.

NB: by this time, (i) nouns had lost their gender. (ii) The Old English noun "scip" (ship) was not feminine - it was neuter https://bosworthtoller.com/57769

15
Why use the term “Sister sites” instead of “Brother sites”?
3
Why do we say 'our sister______'?
1
Why teams working on related projects are called sister teams and not brother teams?
1
Is there a gender-neutral version for expressions like “sister site”?

10
How do the terms “fanboy” and “fangirl” differ from the generic term “fan?”
4
Origin of the term 'smartphone'
1
the usage and origin of the expression “I bags that”
4
What is a “thread” called on Q&A sites like SE?
18
Origin of “skin in the game”
15
Origin and usage of “copypasta”
2
How to translate Portuguese demonyms containing gender?