Is there a scale, rating, or formula for the 'pleasantness' of a word?

I'm wondering, some words sound 'nicer', not taking their associations into account. For example, long vowels and soft endings are considered rounder than hard vowels, like k. (This is the Bouba/kiki effect). They are also considered more pleasant.

On lists of words that people hate, short, hard consonant-ending words tend to appear, like, 'moist', 'snort', 'flap', and 'curd'.

Is there a rating system or formula that quantifies how 'nice' a word is? I think it would be useful for naming things, or helping non-native speakers with word choice.

A study was conducted and published at the University of Wisconsin-Madison in 2013, Inherent Emotional Quality of Human Speech Sounds, in which it was demonstrated...

...that certain strings of English phonemes have an inherent, non-arbitrary emotional valence which can be predicted on the basis of dynamic changes in acoustic features.

To remove any "biasing", nonsense words were used with both upward and downward F1-F2 shifts, and subjects were asked to associate the "words" with pictures, much like in the Kolher study (1929). Examples of the "words" are shown below. 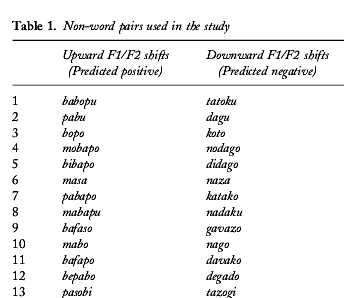 And this is an example of "words" + pictures: 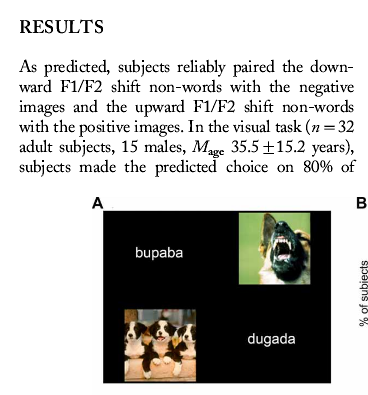 The conclusions were that:

The data presented here effectively outline a formula for constructing words and non-words that implicitly conjure positive or negative emotion. Accordingly we see potential applications of this study to a variety of educational, social, clinical, and marketing contexts.

I do not know if this study has ever been replicated; I will leave that up to you to follow up.

Below is the link to the PDF of the complete Meyers-Shulz study.

Not the answer you're looking for? Browse other questions tagged phonology or ask your own question.

8
To what extent do English words sound like what they describe?
2
Knick-knack and bric-a-brac?

10
Why's 'Cellar door' the most beautiful English word/ phrase?
27
Is there a rule for pronouncing “th” at the beginning of a word?
0
What is the word for inserting additional letters when pronouncing a word?
0
The pronunciation of the word "window"
5
What is the term for when a word begins with the previous word's ending sound?
8
Is there any Saxon word that contains /ʒ/?
7
Does any native English word contain the 'ñ' sound?
6
How shall the word "biology" be interpreted, if no English word can start with two stressed syllables?