When did jaybirds start “going to Hell on Friday”?

I have been re-reading Faulkner´s Snopes trilogy, and came across this passage from Dilsey 1928.

Luster went to the woodpile. The five jaybirds whirled over the house, screaming, and into the mulberries again. He watched them. He picked up a rock and threw it. "Whoo," he said. "git on back to hell, whar you belong at. Tain´t Monday, yit."

Luther is a young Afro-American kitchen helper, fairly irresponsible, working in a white household in Missisipi. Throughout the story he has been sneaking off to drink and avoid work.

I had never heard this expression before, and I believe it originated in the South of the United States. After doing a little searching around, I came across several usages of the expression. One was the title of a book by Havilah Babcock Jaybirds Go to Hell on Friday and Other Stories (1965).

I found another use of the expression in one passage in the Frank C. Brown Collection of North Carolina Folklore (1977) :

"...they (jaybirds) go to hell on Friday to tell the devil about all the meanness you people done to us Negroes through the week."

And in Carl Sandburg´s Mary Lincoln: Wife and Mother.

She told them that the jay birds go to hell every Friday night and tell the devil all wrongdoings they have seen the week just passed.

What is the origin and first usage of this expression?

The "first use" of the phrase (or variants), therefore, must lie in an oral, folk tradition. This is beyond the brief on ELU. However, to illustrate the boundaries of that brief, I'll contrast evidence showing the first (documentable) use of the phrase with evidence exploring the (documentable) origin of the folk tale.

The first use of the phrase I could locate was this from The Pulaski Citizen (Pulaski, Tennessee), 19 Jun 1884, p 3 (paywalled link): 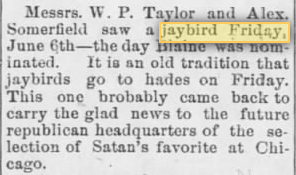 Messrs. W. P. Taylor and Alex Somerfield saw a jaybird Friday, June 6th — the day Blaine was nominated. It is an old tradition that jaybirds go to hades on Friday. This one brobably came back to carry the glad news to the future republican headquarters of the selection of Satan's favorite at Chicago.

As can be seen in this, what is for now the first documented use of the phrase, its origin is referred to a "tradition". That "tradition" is the tale.

The tale, as it turns out, is interesting in its own right. Evidence for the origin of the tale is murky and speculative, although now the proper province of a rigorous scholarly discipline (Folkloristics or Folk Studies) with linguistic elements. One of the earliest accounts of the tale's origins is this from Ernest Ingersoll's 1923 Birds in legend, fable and folklore (pp 166-7, but see pp 154-78, the chapter titled "Black Feathers Make Black Birds", for complete reference):

It is not surprising then to hear that European crows go down to hell once every year, when they must appear before Old Nick and give him a tribute of feathers....

An extraordinary survival of this last notion — unless it be original —  is found among the negroes of some of our [US — ed.] Southern States, who say that the "jaybird" (bluejay) is never to be seen on Friday, because on that day he is carrying sticks to the Devil in hell; that in general this bird is the Devil's messenger and spy; and that the reason he is so gay and noisy on Saturday is that he is so glad to get back to earth. An old Georgia darky explained the matter as follows:

Lousiana negroes are of the opinion that the jay is condemned to this weekly trip as a punishment for mis- behavior at Christ's crucifixion, but what dreadful deed he did has been forgotten. Every reader of "Uncle Remus," or of the stories of Mrs. Ruth McEnery Stuart, Mr. Harry Stillwell Edwards, and other Southern writers, knows how largely the "jaybird" figures in the plantation-tales of the negroes, especially of the coastal districts, where the blue jay is one of the most conspicuous and interesting of resident birds.

A more comprehensive, recent collection of the tale can be found in the 1977 The Frank C. Brown Collection of NC Folklore: Vol. VII: Popular Beliefs and Superstitions from North Carolina, Part 2, pp 394-5, where sections 7252-5 present a variety of forms of the tale encountered at various times and in various places by folklorists. To illustrate, here is a clipping of sections 7253-5: 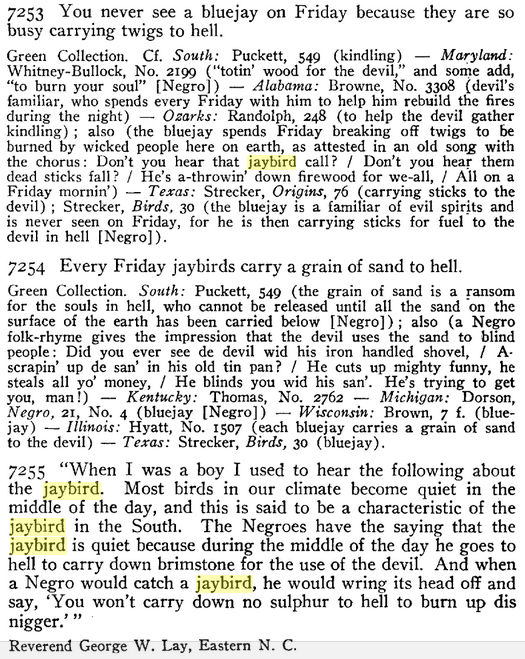 Altogether, none of the evidence regarding the origin of the tale is specific to any phrase. The phrase itself only exists as a reflection of variants of the tale and, as such, has no independent, discoverable linguistic origin. Its origin is, rather, folkloristic.

Jaybird features heavily in African American folklore and is said to be a servant of the Devil1.

A story from Folk Beliefs of the Southern Negro (1926) by Newbell Niles Puckett should help us understand better (Page 549):

Every Friday the jaybird.. [visits] hell to take kindling, sand, or a drop of water to the devil. Some say that this grain of sand is a ransom for the souls in hell, who cannot be released until all the sand on the surface of the earth has been carried below; while others take the view that the jaybirds sold themselves to the devil at one time for an ear of corn, and are obliged to take sticks and sand to him every Friday to make his fire hot.

Though most sources state that the bird returns to earth on a Saturday (which April 8th 1928 was), Faulkner, it seems, was familiar with some variant of this myth, for on p. 228 Luster instructs the jaybirds to “Git on back to hell, whar you belong to. Tain’t Monday yit”.

Jaybirds go down to hell every Friday with a grain of sand.

There may be some, particularly in Boston, who will not believe these facts, but let them come and see, and if they will do neither, let them take the jay bird's Friday flight and see their relations.

(This article is by an Alabama dental surgeon basically saying that northerners who don't acknowledge how well-off Negro slaves are, should go to hell.)

A July 1877 Harper's article specifies when exactly the jays go to the bad place:

Not the answer you're looking for? Browse other questions tagged etymology expressions allusion or ask your own question.

7
When did “kid” start to mean “child”?
2
Where exactly did the phrase “hell on legs” come from?
13
When did we start talking about “going viral”?
17
When did people start “boinking”?
2
When did dogs start “wagging” their tails?
2
When and why did “bug” start referring to illnesses?
2
When did the “sales pitch” start?
12
When did “for days” start meaning “marvellous”?
3
When did 'Robot' start implying a machine?
11
When did Monkeys start making wrenches?