That persistent feeling / memory that stays with one after a profound dream?

I feel rather bad asking this here, as I am fairly certain there is no extant word in the English language to describe this; however, since we borrow words freely from other languages, may I inquire as to possible choices?

I have looked on these sorts of lists but have not found anything as specific as I'd like. The closest I have come across thus far is saudade. But it is, I think, not quite the same thing.

EDIT Following Tushar Raj's first attempt: This is a feeling of being transposed, almost; the persistent memory of the dream-that-was seems to keep one in the powerful feeling of the dream even once one is fully awake. My personal experience is that it can go on for a full day, or until one's next sleep. Usually, it's only for an hour or two after waking. For me at least, there is often a sense of melancholy or "out-of-placeness" associated with it. It is often not a pleasant sensation, even a little disturbing. But there certainly can be pleasant instances. I imagine it depends on the psyche.

peace of mind after a pleasant dream

EDIT: Added after the OP's suggestion:

In a state of depression following a nightmare:

Glenda's bad dream was so real that she wandered around the next day in a state of malneiophrenia because she was feeling unsettled and emotionally disturbed.

Are you looking for "a reverie"?

"I found myself lost in a reverie of what I had dreamed the night before."

Since my first answer was "off-the-mark" for your specific use-case, I have a second suggestion now that you've expanded your post:

This is probably not a standard word, but if it's "melancholy" you're after, you can try:

There's a passage from Gothic Transgressions which demonstrates its use. 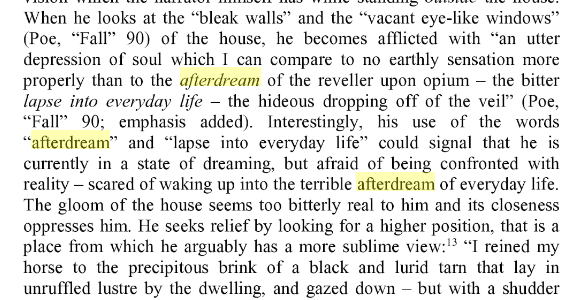 Here's another instance of the word, in a poem by Bruce Beaver:

Maybe hypnopompia or hypnagogia could work.

Hypnopompia is a word that refers to the state of semi-consciousness which occurs when one is emerging from sleep into wakefulness. During this transition, there may be a sense of strangeness or unreality, and the visual impact of dreams may carry over into the waking world, sometimes even in the form of hallucinations. The state is often associated with narcolepsy, but has been found to be common in people who do not suffer from narcolepsy as well.

Hypnagogia is a similar term which usually refers to the transitional state one experiences just before falling asleep, which can include a sense of unreality and strangeness, and possibly hallucinations or altered perceptions. Such a state can occur during the day, in which case it may also be called a waking dream. While it's usually used to refer to the state leading from wakefulness to sleep, it can also be used to refer to the transition from sleep to wakefulness, and there are differing opinions in the field of sleep research about the correct terminology.

Not the answer you're looking for? Browse other questions tagged single-word-requests nouns emotions or ask your own question.

2
What is that feeling one gets when they are about to sneeze?
7
Is there a word in English for the Portuguese term “saudades”?
8
In search of an English word/phrase that describes the feeling when one feels stress from knowing important information that others do not
1
One word for the “feeling one has after acquiring the habit of being flattered” (भाव खाना)
2
What is the word for the feeling of loss that is experienced when you wake from a dream?
1
A word that refers to the feeling of anticipation of new opportunities that one thought previously unreachable