What does “möbius” (moebius) mean?

In Starcraft II there was a mission called The Moebius Factor. Unrelated to that, a new Futurama episode called Möbius Dick was recently released.

Does anyone have any idea what does the word mean? Either generally, or in connection with any of the aforementioned phrases.

This refers to the 2D-3D crossover object known as a Möbius strip. From Wikipedia:

The Möbius strip or Möbius band (pronounced UK: /ˈmɜːbiəs/ or US: /ˈmoʊbiəs/ in English, [ˈmøːbi̯ʊs] in German) (alternatively written Mobius or Moebius in English) is a surface with only one side and only one boundary component. The Möbius strip has the mathematical property of being non-orientable. It can be realized as a ruled surface. It was discovered independently by the German mathematicians August Ferdinand Möbius and Johann Benedict Listing in 1858. 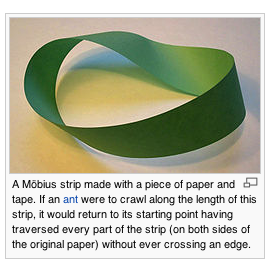 Möbius is by far most famous for his Möbius strip, a three-dimensional surface with only one side, and a popular cultural reference (in the States, at least, children are taught about Möbius strips in elementary school). However, that's not the only thing he's known for - for instance, in college-level mathematics, the Möbius function is very important in the study of the Riemann-Zeta function.

The Starcraft mission is referring to the Möebius Foundation, a fictional organization which plays an important role in the game's storyline. It actually has nothing to do with Möbius, other than likely being named after him simply because game-developers are often math geeks :P

I don't know why @Thursagen deleted his answer, but it did contain the only non-trivial information relevant to OP's question (defining a Möbius strip seems trivial to me, since however you spell mobius, Google's top result will probably be that Wikipedia page).

Möbius Dick is simply a pun on Moby Dick (or, The Whale, by Herman Melville).

In passing I'll just mention that Moby Dick has long been fertile ground for puns based on the slang usage of dick for penis, the fact that a common type of whale is the sperm whale, and that as an "unknown adjective", moby suggests something mouldy, moribund, or otherwise unsavoury. In this case the Futurama writers seem to have avoided those connotations.

1
What does “in direct line of descent from..” mean?
7
What does “Not to be a dick, but—” mean? Is “Dickishness” an accepted, stand-alone English word?
1
Meaning of “Smile Awryls”
5
What does “uninterpenetratingly” mean?
0
what does “there was wild talk” mean?
9
What does “the New York egoscape” mean?
2
What does “Factors” mean when used in a company name?