From alcoholics to shopaholics

When and where did the -holic in alcoholic get added to words like shopaholic? The Online Etymology Dictionary lists some dates for an array of words formed using the suffix, but it doesn't show whether the origin was in the US, UK, or somewhere else, and it doesn't cite sources for the dates:

The place of origin and sources of the dates for the words are also not cited at the linked entry in Dictionary.com.

Early attestations for most of the '-holic' words are from the US; 'workaholic', however, the earliest formation from the '-aholic' suffix, is attested from a Toronto, Canada newspaper, the Toronto Daily Star.

Thus far, my research (continuing) has antedated the 1977 OED attestation for 'shopaholic', in the form 'shopoholic', to 1972: 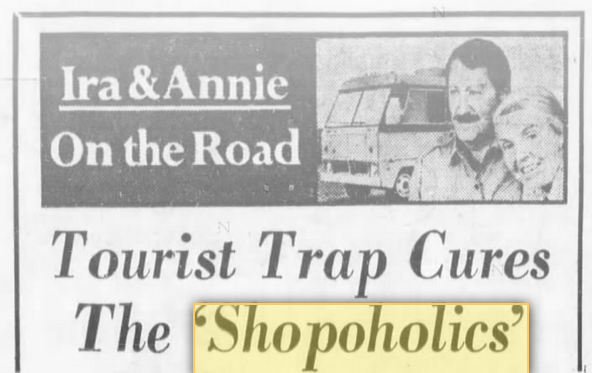 1984 for shopaholic according to Etymology online, which is a good reference to know

The word alcoholic refers to someone who has a serious disorder. Addictive shopping can be serious, too, but the word shopaholic is most often used playfully to suggest mere excess rather than true addiction. Shopaholic first appeared in print in 1983. It was formed on the model of alcoholic, which was itself created many years earlier by combining alcohol with -ic, meaning "of or relating to." People evidently saw a parallel between someone addicted to alcohol and someone "addicted" to shopping. This is not the first time alcoholic has spawned a spinoff word-shopaholic was preceded by workaholic and chocoholic, both of which first turned up in 1968.

The earliest uses I can find in Google Books refers to folks addicted to shopping.

0
From mothers to mammals
5
Where does "incensed" originate from?
3
Where does "shakedown" come from?
6
Australian hypocorism and the origin of "selfie"
10
What is the 1896 source for the origin of "dyke"?
2
Where did "yeppers" come from?
1
Is there a word for when suffixes are overly co-opted into new words?