Is alcohol called spirits due to linking of imagery?

I was wondering if there is any correlation between the way alcohol burns and a common view of a spirit? 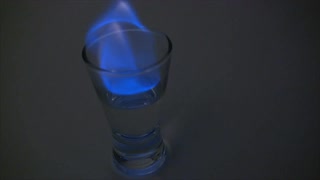 Spirits are often pictured as blue and wavering (think of the will-o'-the-wisps in brave). 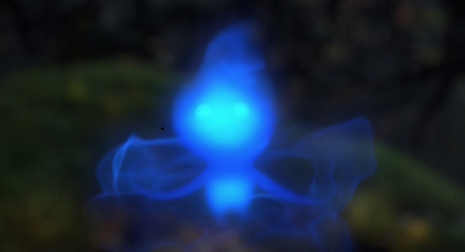 Coincidence? To be clear: I am asking if alcohol is called spirits partially due to this imagery, not about whether spirit's images are based of burning alcohol.

It is from the ancient alchemy notion of "volatile substance". The vapor given off and collected during an alchemical process (as with distillation of alcohol) was called a spirit of the original material:

The root of the word spirit is the Latin spirare - to breathe. It then becomes synonymous with "life" and "living" - including in the religious sense - the Holy Spirit.

Then of great relevance to the development of the word as we use it in connection with substances is what happens, evidently, from the 14th century.

a. One or other of certain subtle highly-refined substances or fluids (distinguished as natural, animal, and vital) formerly supposed to permeate the blood and chief organs of the body. In later use only pl.

1477 T. Norton Ordinall of Alchimy v, in E. Ashmole Theatrum Chem. Britannicum (1652) 82 The Spirit Vitall in the Hert doth dwell, The Spirit Naturall..in the Liver.., But Spirit Animall dwelleth in the Braine.

There are further entries on this down to the 19th century. However from the 17th century the notion of spirits as a refined substance generally seems to become accepted sense 21 -

a. A liquid of the nature of an essence or extract from some substance, esp. one obtained by distillation; a solution in alcohol of some essential or volatile principle.

1728 E. Chambers Cycl. (at cited word), The Chymists are said to draw a Spirit from Sulphur, Salt and other Bodies, when they extract the Essence, or the subtilest Part thereof, by Distillation or otherwise.

1813 H. Davy Elements Agric. Chem. (1814) 136 All the common spirits may, I find, be deprived of their peculiar flavour by repeatedly digesting them with..charcoal and quicklime.

It would seem therefore that the etymological route is from spirare - (to breathe), to spirit - meaning "alive", to substances supposed to permeate the blood - and finally to refined materials like alcohol, turpentine etc.

The Hebrew information (per @David) is interesting. Spiro (spiravi, spiratus, spirare) according to my Latin dictionary Virgil used it in idioms to mean variously of strong odour; be propitious; to breathe, blow, be exhaled, burst forth, rage, figuratively to be inspired, have poetic inspiration and Horace (born 65BC) to breathe, live, be alive - videtur Laeli mens spirare etiam in scriptis: spirat adhuc amor puellae

It doesn't say anything about "spirit" in the sense of the non-corporeal.

Another (English - Latin) dictionary indicates the word for soul was animus (m) and ghost - anima (f). So it would appear that the linkage between breath(e) and spirit does not emerge from Latin, at least not classical Latin. Might be interesting to look at how medieval Latin dealt with it (or to hear from a modern Italian speaker such as @Mari-Lou A)

Senses 6 & 7 of the OED re the Christian ideas; examples do not start to appear in the dictionary until the later middle ages e.g 14th century (and a Chaucer concordance indicates his extensive use of the Christian spirit) suggesting it may have been the non-availability of Judeo-Christian literature in English prior to the fourteenth century (as one commenter has noted) that may explain the lack of examples prior to that time.

Just to add to Josh's (correct) answer; it appears that the use of the word "spirit" in connection with distillation fist came about in the Middle East. Wikipedia states:

The term "spirit" in reference to alcohol stems from Middle Eastern alchemy. These alchemists were more concerned with medical elixirs than with transmuting lead into gold. The vapor given off and collected during an alchemical process (as with distillation of alcohol) was called a spirit of the original material.

No: because alcohol is not called spirits. :-)

Spirits, in the alcoholic sense, refers specifically to a particular type of drink, one manufactured by a process involving distillation, such as whisky or gin.

Most alcoholic drink (by volume) is not produced in that way.

Beer, for instance, is brewed (traditionally from hops), not distilled. And beer (or, originally, mead) has historically represented, by volume, far and away the largest percentage of alcohol consumed in the English-speaking world.

Wine, for instance, is fermented in a fermentation process (traditionally based upon grapes). Likewise cider.

So there is no logical (or etymological) reason to suppose that the term spirits has ever referred to alcohol in general. It refers to one type of alcohol, and that type is not even the most common form by volume.

And in a historical context, people did not traditionally ignite spirits.

Whisky is quite expensive, even today: in historical periods in England, most people could not have afforded to set light to their drink! (Nor would want to.) So there is actually no reason to suppose that some forms of alcohol are termed spirits because our Victorian forebears enjoyed watching their drink go up in flames!

Nice idea. But burning your whisky was probably never very popular in Scotland!

My theory is that there is a link, and that that link concerns the fact that strong alcoholic drinks bring on the unholy spirit/s, while the weaker ones doesn't. Thus, the latter can, therefore, be said to be of the holy spirit.

The 5th century, BC, Greek Philosopher, Euenos, suggested that wine should be diluted to not cause "grief, or madness". He said that to make wine sound, it should be mixed with water.

The wine that Jesus miraculously made at the wedding at Cana was most likely a mixture of a more recent, sweeter, wine and water. It had less alcohol and tasted better than the host's wine mixture, which was stronger, and less tasting. The reason it was stronger and less tasting was because all of the sugar in the wine had been converted to alcohol.

7
Why are baseball statistics called "sabermetrics"?
15
Why is it called "blind baking"?
9
What did the English call alcohol before they had the word alcohol?
14
Why are women called chicks?
2
Why are bankers called "the Platform"?
34
Why is white noise called 'static'?
5
Why are movie captions called "subtitles"?
1
Why are traitors called moles?
5
Why are “gym rats” so called?