Why did Jitney become slang for nickel?

According to Merriam-Webster, jitney is slang for nickel:

Jitneys weren't worth a dime—just a nickel. In the early 1900s, jitney was slang for "nickel," but it wasn't long before the term was applied to a new mode of public transportation that only cost a nickel.

It also says the etymology is unknown. Are there any theories as to the origin of jitney?

World Wide Words suggests that its meaning for nickel coin is from the late 19th century:

Its usage referring to vehicles appears to be at least a decade later as suggested by Wordorigins.com.

The original meaning of jitney was ‘a five-cent piece, a nickel:

It may be possible to antedate the word (which has been spelled jetney, gitney, and jitney) to the 1870s:

"Does jitney mean a nickel, or a ride, or a method of transportation, or a state of mind? Apparently it now means transportation, whether it means transportation for a nickel or not is disputed. Certainly the term 'jitney,' before the jitney boom arose, meant a small coin, a cent, five cents, a dime, or a quarter. As a boy in San Francisco, the writer has heard and used the term 'jitney,' meaning either a nickel or a dime. Cents in those days were unheard of on the coast. Later, in New Orleans, the term jitney was often heard, but there it seemed to refer to a nickel alone. May we advance a theory? The jitney, we think, originated in Louisiana in the Creole word, 'jetton,' meaning a counter, or poker chip. It did not necessarily mean a nickel, because this was in the days before nickels were invented, and in Louisiana until the time of the civil war circulated a miscellaneous assortment of Spanish, French and South American coin. Therefore, jitney meant the smaller denominations of these coin—sous and pesos and what not. From Louisiana the term naturally traveled to California. It has been in use there since the days of '49. How do I know? Three reasons: first, we infer that the word was in common use because we had learned it there; secondly, because several pioneers have told us it was used; thirdly, because in reading the old files of the Overland Magazine some time ago, dated in the seventies, ]I found that the term jitney is used by one of the characters of a story of San Francisco life, the context of the story shows that this particular 'jitney' was a quarter. A further proof that a jitney is not necessarily a nickel is that in early times no coin of less value than a quarter circulated on the coast.

"So. Mr. Jitneur, when some opponent upbraids you for not being a true jitney because you may charge more than five cents, read him this article and crush him to earth. A jitney is a small coin, such as the great American public are now paying for trackless transportation.

"Postscript—Alas, for trying to prove anything! We have just received word that a Canadian board of councilmen have decided that a 'jitney' is five cents" (unsigned, "What does Jitney Mean?," The Jitney Bus, vol. 1, no. 4, July 1915, p. 114; the bracketed addition is mine).

I say "may be possible to antedate," because the passage of time (cf. "some time ago") may play tricks on one's memory. Issues of The Overland Monthly have to be examined line by line (so far I have been unable to find the word there).

The anonymous writer's speculation in the rest of the passage is likewise subject to examination. Nothing is to be taken on faith, such as his inference that "the word was in common use because we had learned it there" and his reasoning that the word had been used in California "since the days of '49 [...] because several pioneers have told us it was used."

Also, since five-cent coins have been minted in the United States since the 1790s, the writer's ability to know what the situation was "in the days before nickels [that is, five-cent coins (D. L. G.)] were invented" is doubtful.

The following articles are the only treatments of the word in depth:

Gold, David L. 2009. “American English jitney 'five-cent coin; sum of five cents' Has No Apparent Jewish or Russian Connection and May Come from (Black?) Louisiana French jetnée (On the Increasing Difficulty of Harvesting All the Grain).” In his Studies in Etymology and Etiology (With Emphasis on Germanic, Jewish, Romance, and Slavic Languages). Selected and edited, with a foreword, by Félix Rodríguez González and Antonio Lillo Buades. Alicante. Publicaciones de la Universidad de Alicante. Pp.163-192, partly available here.

Gold 2009 mentions another etymology suggested for gitney ~ jitney (namely, that it comes from the alleged French noun *jetnée) but does not go into detail. The present article delves deeper into that suggestion; it finds no reliable evidence for that word; and it suggests that if the word has ever existed, it is likely a reflex of gitney ~ jitney. The present article also examines Stephen Goranson’s recently suggested etymology of gitney ~ jitney, namely, < earlier American English jetney ‘?’ < French *jetnée, and finds no evidence for it.

This is the table of contents of the second article:

4.1. Literary texts, all the more so, poetry, may not be faithful reflections of everyday spoken usage

4.2.3. Misprints and other mistakes

4.2.4. Use of a bare count noun in lines 1 and 3 is in all likelihood not a feature of Kouri-Vini origin

In response to Greybeard's comments (later in this thread):

Thank you for your comments.

Regarding, “‘A five-cent piece, a nickel,’” as noted in the post above edited on 29 October 2020, the word has been used to designate coins worth up to and including twenty-five American cents.

French jeton cannot be the immediate etymon of jitney for phonological reasons (an article now in press in France will give details).

The Yidish suggestion has indeed been dismissed for lack of evidence (details in Gold 2009).

There being no conceivable link been rye and a coin worth up to and including twenty-five American cents, the Ukrainian adjective житній (have you found it in Russian) cannot be the immediate etymon of American English gitney ~ jitney.

As noted above, the currently earliest-known use of jitney, however spelled, is in Springfield Globe-Republic of 8 August 1886. The number of speakers of Ukrainian in the United States before that date was tiny and their linguistic influence nil.

With respect to cobaltduck's remark (above)that "Etymonline seems to indicate the usage for coin and vehicle arose simultaneously, the vehicular sense of the word could not have arisen before 1 July 1914 (for the reason, see the section headed "The Financial Panic of 1914 led to the emergence of an additional meaning of the word jitney" (on pages 387-390 of Gold 2018-2020, referenced above). Thus, the monetary sense has to be at least twenty-eight years older than the vehicular one.

From World Wide Words article on the word Jitney:

There are strong hints in early sources, including the first known example, that the word appeared first in the south-eastern United States among Creole-speaking African Americans. If so, the most likely source that specialists have put forward is a Louisiana French term jetnée, which is said to derive from French jeton, a token.

This remains a supposition, albeit a plausible one. The experts remain understandably cautious.

Additionally, there is this citation:

The following newly-reported discovery appears to confirm such an origin by giving--in an African-American newspaper in 1898--a transitional form.

Note association with coach as well as (presumably) coin (or token), of little worth.

This can be found on the LinguistsList Listserve in a posting from July, 2016.

Supplemental to the pre-existing fine answers, I've antedated 'jitney' in the sense of 'nickel' to 09 Dec 1886, where the slang term appears on page 1 of the Springfield Daily Republic (behind paywall; at that time the newspaper was published as the Springfield Globe-Republic in Springfield, Ohio): 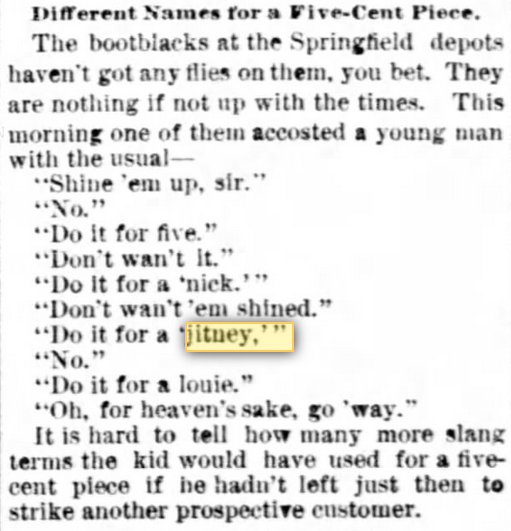 Different Names for a Five-Cent Piece

The bootblacks at the Springfield depots haven't got any flies on them, you bet. They are nothing if not up with the times. This morning one of them accosted a young man with the usual —
"Shine 'em up, sir."
"No."
"Do it for five."
"Don't wan't it."
"Do it for a 'nick.'"
"Don't wan't 'em shined."
"Do it for a 'jitney,'"
"No."
"Do it for a louie."
"Oh, for heaven's sake, go 'way."
It is hard to tell how many more slang terms the kid would have used for a five-cent piece if he hadn't left just then to strike another prospective customer.

Antedating 'jitney' in the sense of 'nickel' to 1886 tends to buttress the anecdotal account reported at Etymonline that the term was in use as early as 1849, while establishing that use in Ohio somewhat erodes the claim that the origin was in the US West.

Jitney appears to be relatively recent

The early reference to St Louis tends, via the French influence) towards the "jeton" theory.

The Jewish origin is not so clear: I can find nothing in Yiddish to support it, but

In Russian (from where many Jews emigrated) "жи́тний" (pronounced dzheet-nee) means "rye" (the cereal used for baking bread and making vodka.)

The website of the University of Missouri - St. Louis gives:

St. Louis has a large immigrant population from Russia and the former Soviet Union. (A 2006 census of ancestry estimates the population at 16,890.) Russian immigrants have come to the city in waves during times of political turmoil or for economic reasons. Many arrived during or just after World War II, others came during the Cold War or when the Berlin Wall fell. Jewish immigrants fled discrimination in their home country and many Christian immigrants came as a result of missionary work.

According to one report, "Jitney," the name of a small Spanish-American coin, was a slang term for five cents [Nickel/Nickel] employed by the "barkers" or barrelhead vocalists who vociferated in front of the lower types of side shows on midways, at fairs or suburban amusement grounds.

The name, once applied to this type of automobile service by many of its patrons, adhered and in time was accepted by the operators themselves and employed to designate their more or less loose associations for mutual benefit. (Shortt, Adam, 1859-1931; Kemp, Hubert R. 1894- (association) (1917) Archive.org (Difficult, for me, to connect link!)

Barrelhead meaning: top of barrel where the small coin, the jitney, was thrown. A smaller, but similar catchment device may have been seen, and utilised in the vehicle used which was, subsequently, called a jitney in 1914.

The reason that the etymology is unknown IMO is that this may not only be a slang word, but could also be considerably longer, particularly if it orignated from the Creole language. This patois-esque language (albeit Spanish in this instance) may use words similar to that used by the current Prime Minister, Boris Johnson: 'Picanninny.'

Notwithstanding, this is the correct spelling, Pickaninny (also picaninny, piccaninny or pickinninie) is a word applied originally by people of the West Indies to their babies and more widely referring to small children, as in Melanesian Pidgin. https://en.wikipedia.org/wiki/Pickaninny,.

Warning: Theoretically, there may be a derogatory word (Spanish for small coin) awaiting discovery!

10
Where does "nickel tour" come from?