What is a word to accompany horizontal and vertical?

If 'horizontal' follows the horizon, and 'vertical' ascends from the horizon, is there a word for a line from the viewer to the horizon? Otherwise, is there a broadly accepted business term for describing data where there are two horizontals, but one is an iterative representation of the first?

Specifically, this word would be used in a business sense to represent a second horizontal of accompanying data that would be something of a Y axis to an X axis. (This is not immediately for purposes of verbal presentation.) Is there a specific term that describes this relation in a business context? I want a word that won't alienate listeners unfamiliar with unrelated fields of study.

While 'longitudinal' is helpful in describing spatial relations, this does not differentiate itself from 'horizontal', which is a common term used in business to describe a broad area, as opposed to a 'vertical' describing a focused area of specialization.

Alternatively, is there a business construct that addresses horizontality, verticality, and adds the ability to describe depth that can be utilized instead that relies on these concepts?

This graph is called a 3D bar graph: 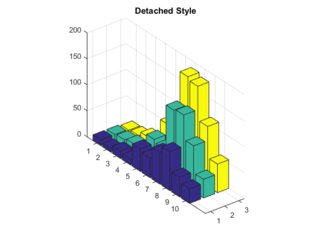 There are a number of terms you can use to verbally navigate one of these. Generically, you can say the 7th column in the third row has a height of almost 200.

It would be even clearer to have labels on the graph. Then, it would be clear what you mean when you say "7th graders in school three read almost 200 books".

Not the answer you're looking for? Browse other questions tagged nouns adjectives business-language or ask your own question.

3
What is the difference between 'despair' and 'hopeless'?
60
X, Y, Z — horizontal, vertical and …?
1
Is there a hypernym for “horizontal” and “vertical”?
0
What is a positive word for “deadline” that's < ~10 characters?
0
Correction mark: a vertical dash through a hyphen, along with vertical parentheses
2
Is there a word for a road or river that runs almost “vertical” in the map?
1
“starting steep and leveling off horizontal” – adjective or adverb
0
Why in business, horizontal market are called horizontal and vertical market are called veritical?