What are the strings outside the baseball bat called?

So I found a cartoon; 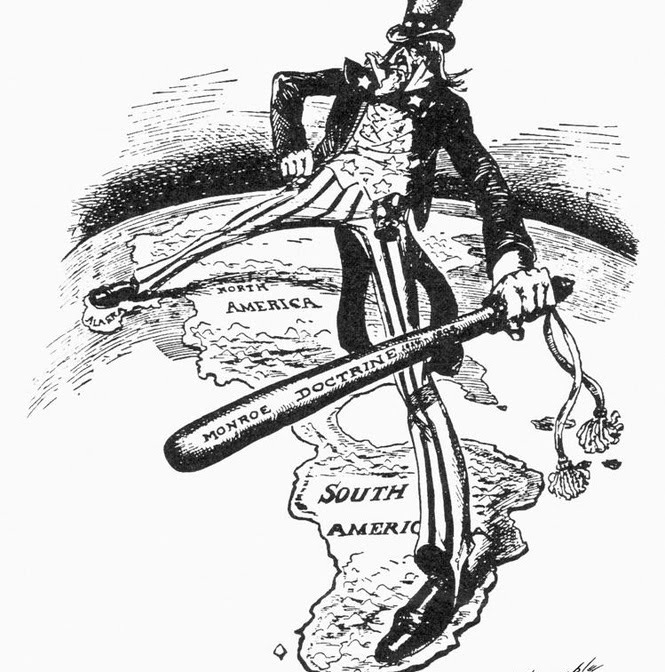 There are some strings coming out from the end of the bat. What are they called?

The "bat" looks like an old-fashioned policeman's night stick--here remimiscent of the famous "big stick" of Rooseveltian (first one) foreign policy, or possibly a reference to America as "the world's policeman". The thong through the handle could be termed:

a cord passed around the neck, shoulder, or wrist for holding a knife, whistle, or similar object.

although they are usually a closed loop. It might also be called a tassel,

a tuft of loosely hanging threads, cords, or other material knotted at one end and attached for decoration to home furnishings, clothing, or other items.

if it is only for decoration.

A reverse image look-up on Google located the image and tied it to the Roosevelt Corollary to the Monroe Doctrine.

I can tell you where they came from

The sword knot or sword strap, sometimes called a tassel, is a lanyard—usually of leather but sometimes of woven gold or silver bullion, or more often metallic lace—looped around the hand to prevent the sword being lost if it is dropped. Although they have a practical function, sword knots often had a decorative design. For example, the British Army generally adopted a white leather strap with a large acorn knot made out of gold wire for infantry officers at the end of the 19th century; such acorn forms of tassels were said to be 'boxed', which was the way of securing the fringe of the tassel along its bottom line such that the strands could not separate and become entangled or lost. Many sword knots were also made of silk with a fine, ornamental alloy gold or silver metal wire woven into it in a specified pattern.

The art and history of tassels are known by its French name, passementerie, or Posamenten as it was called in German. The military output of the artisans called passementiers (ornamental braid, lace, cord, or trimmings makers) is evident in catalogs of various military uniform and regalia makers of centuries past. The broader art form of passementerie, with its divisions of Decor, Clergy and Nobility, Upholstery, Coaches and Livery, and Military, is covered in a few books on that subject, none of which are in English.

Indian swords had the tassel attached through an eyelet at the end of the pommel.

Chinese swords, both jian and dao, often have lanyards or tassels attached. As with Western sword knots, these serve both decorative and practical functions, and the manipulation of the tassel is a part of some jian performances.

Not the answer you're looking for? Browse other questions tagged image-identification or ask your own question.