What is the origin of "bend the rules"?

A while ago, I read somewhere that the origin of bend the rules is attributed to a tool called lesbian rule 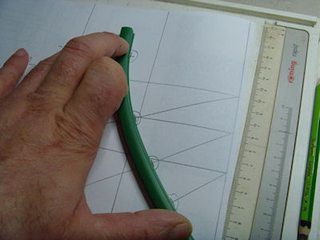 To adjust to arbitrary curved shapes a flexible rule (plastic with lead spine) is used. This has no inner tension, so control points did not work properly. Sometimes it was called lesbian rule. Source

Wikipedia says that the flexible instrument, created to measure the circumference of columns and draw irregular curves, originated in Lesbos, and cites a quote from Thomas Moore (1478 – 1535):

"You praise Adriaan for being unbiased, yet you seem to suggest he is no more unbiased than a Lesbian rule, a rule made out of lead which, as Aristotle reminds us, is not always unbiased, since it bends to fit uneven shapes."

The Complete Works of Thomas More, 1963

According to Etymonline, the adjective lesbian did not refer to a woman's sexual preference before 1825, but to aspects related to the island of Lesbos; e.g., Lesbian wine, its inhabitants and ...

the principal figurative use of lesbian was lesbian rule (c. 1600 and especially common in 17c.) a mason's rule of lead, of a type used in ancient times on Lesbos, which could be bent to fit the curves of a molding; hence, figuratively, "pliant morality or judgment."

The earliest written instance I found in Google Books is dated 1703 from An Essay, for peace, by union in judgement; about Church-Government in Scotland. (Link)

But when we follow the Scent of the Game into the wood of other Antiquity, it will be easier to lose our Selves, than to find that which we are upon the persute of. Yea, the making Tradition the Rule, even of Interpreting Scriptures ; is to bend the Rule to the crooked Stick, and to make the judge stand to the Opinion of his Lacquey, &c ( which was evident in the Jews Traditionary Glosses on their Law, and the Heathens perversion of the Precepts of Noah )

The modern meaning of the verb bend has been attested since the early 14th century and it is therefore unlikely that the idiom was coined at an earlier time. Unfortunately, I have not found any confirmation that it was derived from the Lesbian rule, although everything seems to fit.

What is the origin of the idiom bend the rules?

The earliest known uses of 'to bend the rule' appear in religious literature of the 1600s (1634, 1669; 1689 OED), that is, subsequent to and, as will appear, concurrent with the earliest known figurative uses of 'Lesbian rule' (1605, a1628 OED; 1630). The association of the two is by straightforward textual parallelism of the idiom at its first known appearance, and in the form of a noun phrase, with the figuratively used noun phrase 'Lesbian rule'.

A digression into the lexical aspect of 'Lesbian rule' supplies the chronological and conceptual background for its association with the origin of 'bend the rule'. OED Online gives this definition of the figurative use of 'Lesbian rule':

Lesbian rule n....fig., a principle of judgement that is pliant and accommodating. (Very common in 17th c., but app. not always correctly understood.)

The first OED attestation of 'Lesbian rule', in the form "Lesbian square", appears to be a concrete reference used to leverage a poetic metaphor:

1601 S. Daniel Epist. to Sir T. Egerton 131 That Lesbian square, that building fit, Plies to the worke, not forc'th the worke to it.

The second use attested in the OED is certainly figurative:

1605 T. Tymme tr. J. Du Chesne Pract. Chymicall & Hermeticall Physicke II. ii. 111 The composition and wonderful nature thereof is, as it were, a certaine example and Lesbian rule of our worke.

The third use attested (in the variant form "Lesbian Squire"), from 1606, is at least on its face a literal use referring to an architectural process. The fourth attestation, however, is of greater interest in connection with the question at hand:

The reason this use is given as ante 1628, with the publication date at 1630, is that John Preston is known to have died in 1628; the sermon containing the quote, "The Seventh Sermon" (of fourteen), was delivered prior to that date.

Digging behind the scenes, into a 1634 edition of Preston's New Covenant, it appears the full quote is this:

...now thou goest not by a straight rule, but by a leaden Lesbian rule, by a bended rule.

This shows the straightforward textual parallelism associating the phrase 'Lesbian rule' and the idiom 'to bend the rule'. It is also the earliest example of the latter I found, and is applied in a noun phrase, rather than as a verb.

I will provide attestation of other early uses of the idiom 'to bend the rule', the dates of which uses dovetail with figurative uses of 'Lesbian rule' in the 1600s (as listed parenthetically for both phrases in paragraph two of this answer), although the uses provide no further direct textual evidence of the association of the two.

First, though, here is another early (1630) instance of 'Lesbian rule', not shown in OED Online, from 17th century religious literature:

... Particlar Churches have erred; therefore the best security from error is in the Scriptures.

This is a Lesbian rule, able to decide all Controversies, and it is vitio hominum, by the fault of bad Interpreters that it doth not. ....

OED Online attests the date of the first use of 'to bend the rule' as 1689:

rule, n.1
....
f. to bend (also stretch) the rules: to interpret the rules leniently; to overlook or allow an infringement of the rules.

1689 R. Atkyns Enq. Power Dispensing with Penal Statutes 36 Let us not..approve of all things, tho' delivered by Authors of greatest Name, for they often serve the Times, or their Affections, and bend the Rules as occasion requires.

Two earlier uses in religious literature of the 1600s, in addition to the earliest use (shown in the foregoing), chronologically support the original textual association of the idiom with 'Lesbian rule'.

One is from another of John Preston's works, also published in 1634 but, just as with New Covenant, composed prior to 1628:

Therefore hence observe, the God must needes be most holy, and righteous, and just in all his wayes; because there is neither love, nor hatred, nor griefe in him, nor joy, which should make crooked or bend the rule of his will, or alter it in any action.

Life eternall; or, A treatise of the knowledge of the divine essence and attributes (1634), John Preston. Bold emphasis mine.

The other is this from the 1669 An elegant and learned discourse of the light of nature, p. 140, by Nathanael Culverwel:

... Though they be not come to such an height as this; yet, either by their flat, and frigid explicating, they do endeavour to dispirit, and enervate the Word of God; or else, in a more violent, and injurious manner, they do even ravish it, and deflower the virginity of it; or else in a more subtle, and serpentine manner, they seek to bend the Rule, and expound it to their purposes, and advantages. The Letter of the Word, the vagina verbi, that does not wound them, that does not strike them: and as for the edge, they think they can draw that, as they please; they can blunt it, as they list; they can order it, as they will.

While the term Lesbian Rule does refer to the flexible ruler described on the wikipedia page you have referenced, there is also a brief page from the Massachusetts Institute of Technology site which suggests its association with the idea of bending the rules goes back to at least the time of Aristotle.

By the Lesbian rule. This is said when things are done the wrong way round, when theory is accommodated to fact and not fact to theory, when law is suited to conduct, not conduct corrected by law; or when the ruler adapts himself to the behaviour of the populace, though it would be more fitting for common people to conduct their lives according to the will of the prince; if only the prince himself has right conduct before his eyes as his rule and aim. Aristotle mentions this adage in his Ethics, book 5: 'For the rule of what is indefinite is also indefinite, like the leaden rule used in Lesbian architecture; the rule changes to fit the shape of the stone and does not remain a rule.'

EDIT Additional sources which identify this association are as follows :

In the 17th century, according to the OED, the phrase was commonly used in English in a figurative sense, referring to “a principle of judgement that is pliant and accommodating.”

The Dictionary of Phrase and Fable : A post facto law. Making an act the precedent for a rule of conduct, instead of squaring conduct according to law.

an accepted principle or instruction that states the way things are or should be done, and tells you what you are allowed or are not allowed to do:

A referee must know all the rules of the game.

The first/most important rule in life is always to appear confident.

So the origin of the phrase "bend the rules" can not be sensibly attributed to a "lesbian rule" or flexible curve as it more commonly called nowadays.

The reference to "bending the rule to the crooked stick" in the 1703 essay is a metaphor. The writer of this essay is saying that just because we do something out of tradition, it doesn't mean it should be a rule that everyone must do it. It would be shaping the rule (regulation) around a false idea of what should be done

A ruler or rule in english is a tool to make straight lines. It also has markings on it.

If you bend a rule(r) then the length changes and something that usually would not be considered a certain length, suddenly fits.