I'm a bit "green around the gills"

Green about the gills is a common British English expression that is used when someone is feeling queasy, or about to vomit or be sick (there's that AmEng and BrEng divide once again). Cambridge Dictionary defines it as being old-fashioned ... gasp.

to look ill and pale:

I think I get the green part. I seem to remember reading somewhere that people's complexion change colour when they are either seasick or carsick. Obviously, they look paler, and maybe their skin adopts a sickly-yellow tinge, but green?

Now for the gills, those flaps which fish use to breathe in oxygen, I might be mistaken but I've only ever heard of gills being used for human beings in this idiom.

The expression green /white around the gills, meaning "somewhat pale, as from being sickly, nervous, or frightened", became popular from the early '30s but it is from the mid-1800. It probably refers to an earlier usage of gills meaning "face":

The notion of green to refer to looking ill is quite old: (Etymonline)

The organ that enables most aquatic animals to take dissolved oxygen from the water. It consists of a series of membranes that have many small blood vessels. Oxygen passes into the bloodstream and carbon dioxide passes out of it as water flows across the membranes. 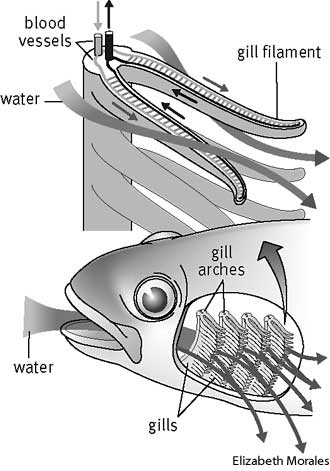 Green around the gills adjective phrase

pale around the gills adjective phrase

The following extract from Wordwizard shows that similar expressions with "gills" referring to the lower part of the face were used in earlier centuries like "rosy about the gillS:

1/8th imperial pint of booze was called a "jack" or "noggin"(attested since the 1600s). 1/4 pint, whoa! That was called a "gill". (pronounced Jill) Have a couple gills (= 1 US cup) and you are done, alright. You've had it to the gills. Later, in the 1800s (as noted above) the term morphed into the multi-colored fish organ as people often read/spoke it with a hard G.

Despite what the original poster said, "green around the gills", meaning sickly-looking, is a common phrase in America as well as in Britain.

I am an amateur mushroom enthusiast and there is a mushroom that is called the "green spored parasol mushroom." It is one of the most common mushrooms mistakenly eaten that are poisonous. It causes severe vomiting. The gills are green during the more advanced stage of the mushroom. I wouldn't be surprised if this is where "green around the gills" come from.

Not the answer you're looking for? Browse other questions tagged idioms history collocation colors or ask your own question.

8
Why is the colour green associated with both growth and illness?
1
Kiwi Power Green - is that more Kiwi "Power Green" or more "Kiwi Power" Green?
3
"Green-eyed monster" before Shakespeare
0
What is the word for bright colors such as green?
0
the meaning of the phrase 'a bit of a bust'