I am asking two things here, about Ænȝlıſċ (Old English) 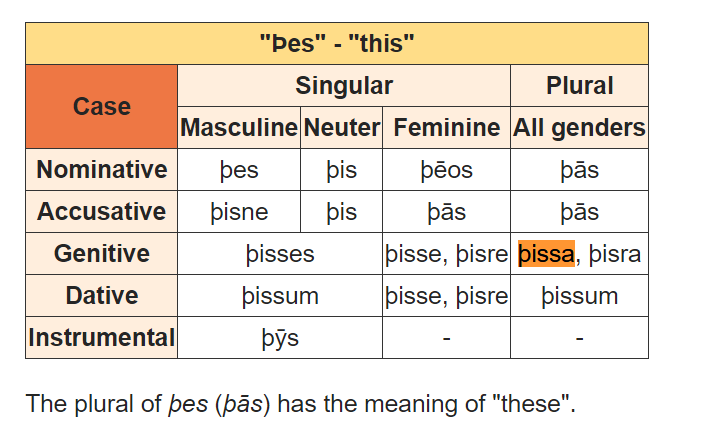 – which was taken from this page:

What is the difference between these two words: "þisse," and "þisre," which, according to the aforementioned, both function, in the Old English tongue as "this"? Both are listed as both genitive and dative case feminine singular.

The same goes for "þissa," and "þisra", which are both listed as being "these" in the genitive plural case.

Are these variations used in specific cases? Or is one of the words classical, and the other newer, one developing early, and one after the Norman conquest? Or are they dialectal differences?

— e.g. in the West Saxon dialect of Old English, "hand," was the word for "hand," as in the human hand, but in another common dialect of Ænglisc, the word was spelled and pronounced as "hond."

Old English is an inflected language, so all words must agree in some form, therefore one does not simply say "mín hand": the genitive singular pronoun does not agree with the noun it owns, "hand", which is feminine. One must say "míne hand", adding "-e", the feminine singular possessive ending, to the stem "mín-."

That being said, suppose a man wanted to show off his hand, and say: "Lo! this is my hand!" Would he say "Hwæt! þēos míne hand!" ("þēos" being the feminine nominative singular form of the article "this"), or would he say: "Hwæt! þisse/þisre míne hand"?

1. I was able to find an article that explains how this, that, and the changed. (You may not be able to get into the full article, unless you're paying a lot for college tuition like I am.)

It compares the language from two different versions of the same poem, one in Cotton Caligula A. ix and the other in Cotton Otho C. xiii. While both manuscripts were written in a Central West Midlands dialect around the same time ("the second half of the thirteenth century"), there were plenty of differences:

Caligula appears to be closer to the original with the language more archaic than that of Otho, which shortened and modernized Laзamon's narrative.

Although the article is clearly written about Early Middle English, the context is nice to have:

Here should be mentioned also an increasing use of þisse in genitive, dative, and post-prepositional contexts, which in Otho almost completely replaces þisses, þissen, and þissere. * This apparently reduced form is only one step removed from indeclinable þis: it would lose the final vowel and merge into the latter in due course of time.

* This spot leads to the following footnote (which answers your first question):

Old English has the genitive or dative singular feminine þisse as well as þissere, “developed by parasiting from þisre” (Campbell, §711). Some instances of þisse therefore could be a reflex of the historical feminine form, though it should rather be taken as a reduced form of þissere, which is almost exclusively found as the genitive or dative singular feminine in Caligula, in line with the development of þisses and þissen.
Unhistorical Gender Assignment in Laзamon's Brut: The Development of a Tripartite System of Defining Words, The, That, and This

2. You should use the nominative case for "this". (You also need a verb!) Here's an example (masculine case):

This is my dear son who greatly pleases me.

Old English from ÆCHom II, 4 B1.2.5
"Translation" from Instructional Writing in English: Studies in Honour of Risto Hiltunen

On a related note, it's interesting to note that some words, notably lichama (body, masculine noun), were not always written with the "right" gender, depending on context:

I think it's a matter of preference. Etymologically and linguistically speaking, yes, they are the same word. Though I can't pretend to know a lot about Old English, I researched it a bit, and it seems like the same kind of difference as the one between "you all" and "y'all" in colloquial English. In his book Essays on Nominal Determination: From Morphology to Discourse Management, Henrik Müller listed the two words as having the same purpose and usage, and en.wiktionary.org agrees. A University of Michigan Middle English Dictionary entry and your site also seem to concur. Obviously, we can't ever know for sure, since no one speaks Old English anymore, but it seems to me that the two can be used interchangeably. Again, I know much less on this than you seem to, but it's a matter of logic, really.

Not the answer you're looking for? Browse other questions tagged grammar pronouns grammatical-case old-english this-that or ask your own question.