Is there a list and/or a rule for nouns that must be pluralized when not preceded by a definite article or adjective?

I recently came upon the following sentence:

Their job is to create advertisement.

As a native speaker of American English, this sentence sounded really odd to me, so I ran it through Google's Ngram, discovering that the phrase "create advertisement" was not found (for either American or British English) as you can see from the image below: 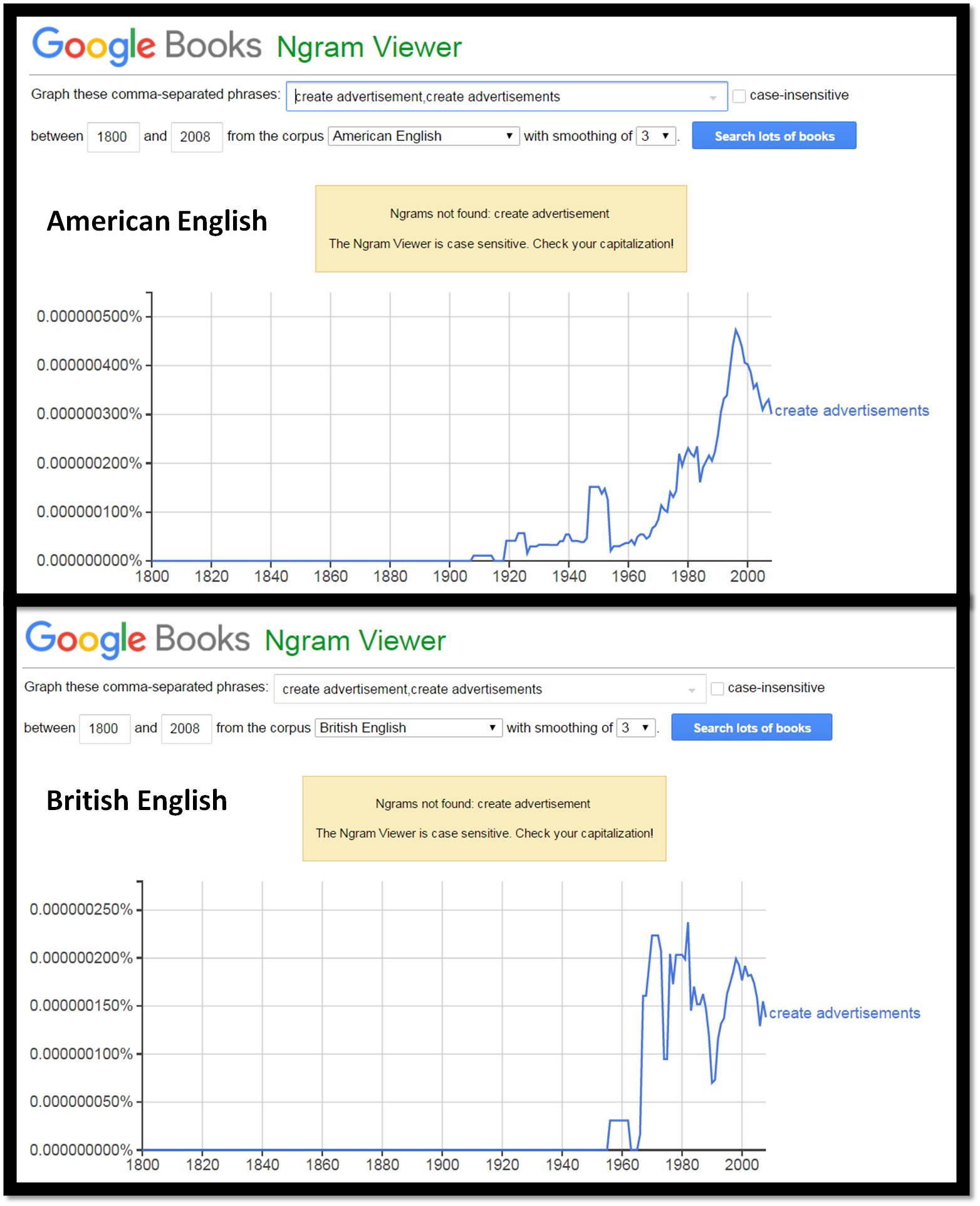 I've also done some searches of Google web pages and have come to the same conclusion. So, I have further concluded that "advertisement" must be pluralized when not preceded by a definite article or adjective. (If I am incorrect in this assumption, please let me know.)

I wanted to explain to those who had created the sentence above (non-native speakers, presumably), from a grammatical or usage standpoint, why it wasn't correct, but my initial searches have not yielded anything worthwhile on this topic. I always feel as if I am somehow falling short on explaining the nuances of the English language whenever I have to fall back on the line, "Well, it just doesn't sound natural to me."

I've visited web pages that list words that are only plural and others that discuss when and when not to use an article with a singular or plural noun and still others that delve into the topic of count vs. non-count nouns, but, thus far, I have not seen anything that discusses nouns that need to be plural when not preceded by a definite article or adjective. I'm assuming "advertisement" isn't the only such word and that, if there are others like it, some sort of rule about their usage has evolved.

Thank you for any insight you can provide, either through your own knowledge of the English language, good logic, and/or references to other material.

I actually think the answer is something you mentioned, count nouns vs. mass nouns.

"Sand" is a mass noun, meaning it doesn't generally take indefinite articles, and you don't generally pluralize it. I couldn't give the fundamental reason for this; any such explanation would probably just beg the question (e.g., in English we don't put the adjective before the noun for any logical reason; whatever reason we could give would be given in reverse order by an equally logical speaker of Spanish).

"Beach" on the other hand, is a count noun. In your example usage, it must take either an indefinite article, or be pluralized.

Also, you can often use a "unit word" (which is itself a count noun) to convert a mass noun into a related count noun. For "sand" this word is "grain":

Finally, I should mention that you can pluralize mass nouns, or use them with an indefinite article, but that generally signals an implicit shift of meaning. A plural for a mass noun X may mean something like, "different kinds of X". In the (somewhat cliched) phrase, "sands of time", for example, the idea is that time produces shifts in the world, much as the wind does to the sand(s) of different deserts you might visit.

So, the final answer to the question of why the example sentence isn't ok comes down to irreducible rules about articles and mass nouns in English.

The discussion starts by restricting ourselves to count nouns, those that come in discrete units that we can label with sequential numbers. Generally speaking, a singular count noun will take an article, definite or indefinite:

In 1a it could be any dog; in 1b, it's likely the particular dog that we own.

For plural count nouns, we may drop the article for indefinite reference or keep it for the definite:

So far, simple enough, but English idiom allows for a singular count noun to refer to the entire collection of that noun, something that at first thought would seem to require the plural form.

[3a] The house smells unpleasantly of wet dog.
[3b] The dog is man's best friend.

In 3a dog is singular, but the objectionable odor isn't associated with any one dog, but with dogs in general. In 3b dog remains singular but our friends are the entirety of Canis familiaris and not any particular dog in spite of the definite article.

So now to your particular question -- is the word advertisement a count noun that allows some collective sense of the singular without an article (as in 3a for dog) or does the absence of the article require the plural form? With the help of the OED, we can trace the history of the word in English. In the 15th and 16th centuries the word had the meanings of attention (that is, turning one's mind to a topic), calling something to the attention of others, notification, and a written notice of notification. The first three senses allowed advertisement as a noncount noun; the fourth did not. The first three senses became obsolete, and the fourth became a public notice (first use 1582) and thence our familiar paid, commercial notice.

At this point, without the article, the word appeared in the plural. There was no need for a singular collective sense because there was already a serviceable word advertising (1530) that meant notification and that became (by 1760) the term for the business of general commercial notices.

As the 20th century turned, the OED noticed that the idiom also turned, and the singular advertisement became a synonym of advertising. No less a source than James Joyce attests in Ulysses (1922):

The infinite possibilities hitherto unexploited of the modern art of advertisement

Alas, I can find no general rule for determining when dropping the article requires a plural. The journey of advertisement in English would indicate that idiom develops with the vagaries of usage.

Not the answer you're looking for? Browse other questions tagged word-usage grammatical-number or ask your own question.

8
About pronouncing the 's' in plural nouns
1
Plural or singular verb for collective term
6
Should we treat "information" as a plural term in the following context?
1
"Germany is/are in the NATO alliance." clarification please
8
Why do we use the article 'a' when referring to 100 items? But we don't use it when referring to any other plural count?
8
"Of any mall" vs. "of any malls"
2
"I often buy fruit" vs "I often buy fruits"?
2
Use of "the" with nationalities that have plural forms