History of the expression “giving 110%”

The phrase "giving 110 percent" is as pervasive in motivational speeches and sports movies as the ubiquitous scene in all submarine movies where they go past "maximum crush depth."

I'd guess this language of "110 percent" comes from efficiency or productivity calculations. But when and how did that specific phrase or idea of "giving 110%" become popular in English usage? Is there a particular reason it's "110%" (and not some other random number bigger than 100%)?

The first use of '110 percent' I found, from 1916, was a sports use referring to competitive rowing. The next two, from 1919, referred to worker loyalty (Sept) and patent medicine formulation (Nov). The latter purported to quote the 19th century US humorist, Artemus Ward (pseudonym of Charles Farrar Browne, 1834-1867), and attributed the '110 percent' trope to that source: 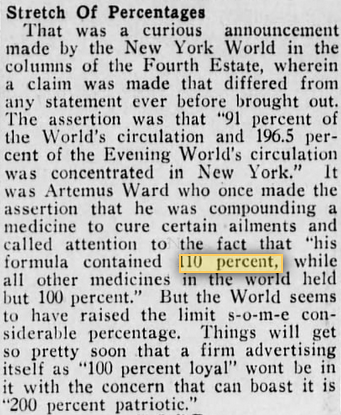 I was unable to verify the attribution to Artemus Ward. A careful search of his work did not turn up the phrase. It is possible the quote was an off-the-cuff remark, however, and certainly the earlier uses of the trope suggest it was already established in the early 1900s. Yet no uses turned up in publications from the 19th century, or from anytime before 1916.

Of the three uses I found in 1923, the first use showed what later became a frequently repeated element of mild humor, here repeated from the first use in 1916 but almost wholly absent in contemporary sports applications. The second repeated the theme of nationality — in this case straightforward nationalism — from the 1920 instance. The second and third uses established another theme by using the trope to refer to special effort.

A 1924 use concerning a basketball team repeats the sports application first seen in 1916, and also emphasizes special effort, as seen in the two later instances from 1923.

In 1929, after four years of waiting in the wings, the trope reappears in another reference to nationality/nationalism. This reference recurs in 1933 and 1939. Interspersed among those are uses with reference to special effort (1930), fakery (1935), theatrical competence (1935), and political orthodoxy (1937).

A ten year gap in the historical evidence is interrupted by a semi-humorous use referring to the amount of attention gotten by a man who emphasizes a point by pounding a gun on a dinner table (1949).

Through the 1950s and 1960s, every use I found related to sports. That dominance continues in contemporary use.

The evidence I found does not support the primacy of any one context of origin. Sports contexts eventually won out (in the 1950s and 1960s), but early patterns and frequencies of use suggest the more likely origin was in a theatrical context, or in the context of nationality/nationalism.

Similarly, the areas of use suggest no single regional source, although with more information something might be made of the early uses appearing primarily in the US east and midwest. Canada is represented by two uses in The Winnipeg Tribune, from Manitoba, 1937 and 1939. Both those appearances are, however, datelined out of London.

Too much could easily be made of the number of early uses in The Brooklyn Daily Eagle (4 of 17, nearly one-quarter). Although I checked to see if those uses were all from articles by one reporter, I could not verify they were. The variety of subjects covered suggests a variety of authors. Perhaps one reporter or editor at The Brooklyn Daily Eagle was fond of the '110 percent' trope, and spread it 110 percent among his colleagues. The span of dates involved (1923-35) does suggest the tenure of a single journalist, or of that journalist's influence on a newsroom. 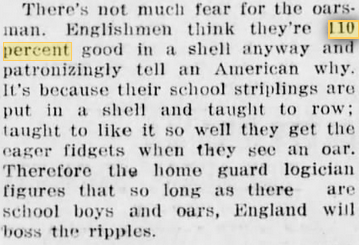 Reports that the United States Steel Corporation would shut down its plants in the Pittsburgh district unless there was 110 percent loyalty shown by the workers was denied today at the office of the Carnegie Steel Co., a subsidiary.

Use in 1920, first of the several early uses referrring to nationality: 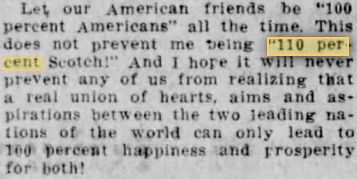 The 1924 application repeating the sports reference of the 1916 use:

In a 1925 use reviewing a vaudeville show, mild humor, special effort, and theatrical competence all underlie the figurative reference to '110 percent': 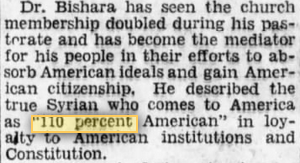 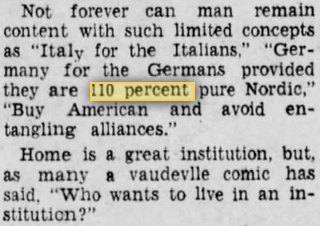 In 1935, fakery and theatrical competence: 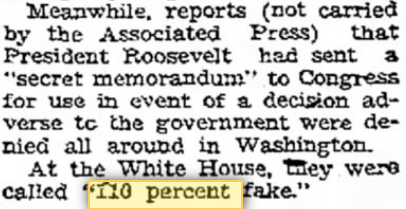 The two appearances in The Winnipeg Tribune, from 1937 and 1939, are datelined out of London, but refer variously to political orthodoxy and acquired nationalism:

"Giving 110 percent" is simply an exaggeration, which happens to be readily understandable, the more so to people with no real idea what a percentage is.

On the face of it, going past 'maximum crush depth' in submarine movies seems similar but wait a minute, please. 'Maximum crush depth' is a design specification, not something that's been tested at the cost of losing an umpty-million-dollar submarine… That's like the 'best before' and even the 'use by' dates on food. Do you really think you'll be in any kind of trouble if you let those dates slip by a couple of days? Of course not.

What those dates means is, you won't be in trouble if you stick to them. Is that the same thing, by any stretch of the imagination?

"110 percent" comes purely from exaggeration, if anything fuelled by ignorance.

The very reason it's "110%" and no other number is that the users know so little of what they're talking about, they have to repeat something they once hear someone else say, in the hope that it might look equally clever. Oops!

Not the answer you're looking for? Browse other questions tagged etymology expressions numbers or ask your own question.