What does "din wall" mean?

In a 1987 'Advanced Dungeons & Dragons' role-playing game accessory ("Book Of Lairs II" by various authors), and specifically in a scenario where humans are chasing a leprechaun down man-sized warren tunnels, I have:

the din has obviously been smoothed [over the trap]

he shows them which rock to roll away from the din wall [to reveal the secret handle].

Does "din" have a meaning other than "loud noise"? Could it be a double transcription/OCR error (my guess), and if so, what was the word most likely used originally?

I think it's an OCR error for dirt.

Tunnelling would result in soil dust being available to smooth over a trap, and form walls out of the earth.

In certain typefaces rt may be interpreted as n, especially if the arm of r and the top of t are particularly short. It's a little surprising that OCR has correctly identified party a little earlier in the paragraph; but combined with a dictionary party is more likely than pany. The same may not be true of dirt and din, which are both known words. 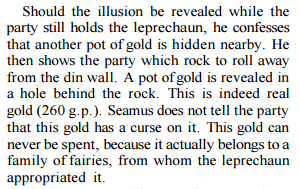 — The Book of Lairs II, hosted in Uzbekistan

Not the answer you're looking for? Browse other questions tagged meaning nouns or ask your own question.