Ask Question
Asked 3 years, 7 months ago
Active 3 years, 4 months ago
Viewed 174 times
3
This question already has answers here:
What is the problem that gets worse after you try to solve it? (19 answers)
Closed 3 years ago.

The scenario: I have a problem Z that I’m tasked with solving by my boss. However, before I can complete Z, I must first finish tasks Y and X. However, X depends on tasks W, V, U, and T. And so on, ad infinitum.

There is a term in either the field of computer science or just in English in general that describes this situation and I, for the life of me, cannot remember it. Any help?

What do you think about you situation suffering from "Spaghetti Dependencies". I don't think it is a commonly used term (a brief search only finds this: http://www.3dfa.com/spaghetti_limit.html), but I assume most people in software development would know exactly what you mean.

Of course it's a play on "spaghetti code" https://en.wikipedia.org/wiki/Spaghetti_code

I'm assuming "poorly scoped" is not the right description to tell your boss. :-)

As suggested by @deadrat in Comment 1 on your question, infinite regress captures perfectly the situation you describe in your question.

"I have a problem Z that I’m tasked with solving by my boss. However, before I can complete Z, I must first finish tasks Y and X. However, X depends on tasks W, V, U, and T. And so on, ad infinitum."

There is an obvious mapping between the truth of Pn and your having to complete an ever expanding list of pre-tasks before you can complete Task n. The underlying concept in the two cases is the same.

Consider a Sisyphean problem, in allusion to the mythical character Sisyphus, who has to roll a boulder up a hill again and again for all eternity, with the boulder always escaping his clutches right before he reaches the top.

You could call this a Russian doll problem.

In a Russian nesting doll toy, as you are handling a beautiful painted wooden doll, you discover that the head and shoulders part of the doll can come off, like lifting a lid off a round box. As you lift the lid, you discover an identical, slightly smaller doll nested inside the first. But the second doll also comes apart! And so on.

If you want to convey infinite nesting, you could add a modifier, e.g. infinite, interminably or never-ending.

Here is a stackexchange meta reference to this description, applied to the problem of ever-expanding questions: https://meta.stackexchange.com/questions/188625/etiquette-for-russian-doll-questions 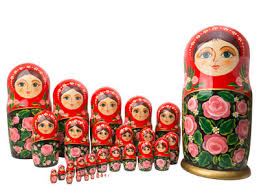 You did not explicitly say that such was the case, but you said "and so on, ad infinitum". Presumably it is such self-referencing dependency that is behind the "ad infinitum".

the show-business catch–22—no work unless you have an agent, no agent unless you've worked

also : the circumstance or rule that denies a solution

The term is often used when the problem is merely circular, not necessarily recursive.

Prededcessor must finish before Successor can start (Land must be purchased before road building can start).

This term doesn't capture the ongoing nature of the task dependencies, but it is a start. You could, I suppose, say "infinite finish-to-start task dependency," but I don't see that term used anywhere in my searches, and it is quite a mouthful.

I believe the term non-linear may be appropriate here:

non-linear: Of or relating to a system of equations whose effects are not proportional to their causes. Such a set of equations can be chaotic.

Just as applicable is the term circular dependency:

circular dependency: In software engineering, a circular dependency is a relation between two or more modules which either directly or indirectly depend on each other to function properly. Such modules are also known as mutually recursive.

Definition: a prolific source of troubles

The god Prometheus stole fire from heaven to give to the human race, which originally consisted only of men. To punish humanity, the other gods created the first woman, the beautiful Pandora. As a gift, Zeus gave her a box, which she was told never to open. However, as soon as he was out of sight she took off the lid, and out swarmed all the troubles of the world, never to be recaptured. Only Hope was left in the box, stuck under the lid. Anything that looks ordinary but may produce unpredictable harmful results can thus be called a Pandora's box.
(Merriam-Webster)

A modern twist on the Greek inspired idiom

Dulcis in fundo (last but not least)

Not the answer you're looking for? Browse other questions tagged phrase-requests programming or ask your own question.

28
What is the problem that gets worse after you try to solve it?