What is the difference between What (the) from How (the), Who (the), and other question words so that we can omit not only What but also What the from such sentences as

(What the) frick/hell/fuck are you doing?'

but not How (the) from

How the frick/hell/fuck are you doing?

When/Why the fuck are you doing that?

Attestation to the omission of What and What the is easy to find.

The hell (The fuck) are you doing?1

Cf The fuck are you talking about? in The Fuse, #8: 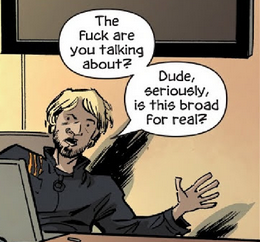 But I as a native speaker I judge that removing How the and who the from the corresponding questions cannot be done without those sentences becoming ungrammatical. In other words

(The) fuck are you doing?

What the fuck are you doing? but not

How the fuck are you doing?

Who the fuck are you doing?

(I have read Lawler's usage of the hell, but he doesn't touch on omitting 'what' in 'What (in)(the) hell are you doing?, just that either but not both 'in' or 'the' can be omitted.)

1 Attested to by common usage such as here, here, here. In addition, the Urban Dictionary confirms that 'The fuck?' is short for 'What the fuck?' and says the corresponding thing about 'The hell?'

2 The even shorter 'the-less' versions are attested by common usage as seen here for example.

[Posting as an answer to mitigate damage in case there is another trigger-happy deletion, and to tie together some discussion points that were expressed in comments.]

OK, you just haven't read Lawler far enough. ^_^ Try his post on conversational deletion. This happens when material understood from context is removed without loss of communication. Note that "Are you doing?" is not possible because material is removed that is essential to comprehension. Whereas the "what" in "The f**k are you doing?" is obvious, the question "Are you doing?" can have any number of introductory components.

Now, you've said your question is not about conversational deletion, and normally I would accept that statement but for two things:

Whether or not you feel there is insufficient information for comprehension in a given removal of syntactical elements, that doesn't mean people don't continue to speak that way. Janus Bahs Jacquet comments that

I wonder if this is dialectal or just idiolectal. To me, “The fuck are you doing?” is perfectly grammatical and doesn't require any more context than if you include what; while “The fuck did you do that?” is completely ungrammatical, even with all the context you could possibly throw at it. No matter how hard I try, I cannot parse it as anything but “What the fuck did you do that?”, which is obviously ungrammatical.

I earlier offered how or why as two words that would complete the sentence satisfactorily:

[How] the fuck did you do that?

[Why] the fuck did you do that?

I feel strongly that it doesn't have to be what, given that the what doesn't make sense there, but other question words would.

I've heard it before, even seen it in movies. I can't reproduce the many conversations I've had in real life here, of course, but here's an example from the 1998 film, Rounders, in which two characters are playing poker, one lays down a monster hand, the other says "The fuck did you lay that down?" dropping either how or why (most likely how). Now, you may object that movies aren't real life, etc., but I will point out that movies are written by writers whose job it is to write convincing dialogue, and the closer it is to how people actually talk the more convincing it becomes. The real test comes, though, when you hear that line spoken and fill in the how or the why in your own ear, because you simply know how that goes. If you have no idea what that sentence means, or how to complete it, you're probably not a native speaker of colloquial or (especially) vulgar English.

If someone comes up to me and says

The fuck are you?

How the fuck are you?

if he was a friend and was smiling when he said it, or

Who the fuck are you?

if he was not a friend and seemed belligerent, or

Where the fuck are you?

if I were, say, hiding in a dark cellar and he was calling down to me from the top of the cellar stairs.

I wouldn't consider that he might mean Why the fuck are you? because it is extremely unlikely that he would be initiating a metaphysical conversation in such a manner.

That whole process would take an instant, if the person hearing the statement is a native speaker, and would probably happen unconsciously as well. The human mind struggles to make the world make sense, and is very good at doing so. We see faces in clouds and the moon, but realize very quickly they are not actually faces. In a heartbeat we analyze the syntax of a sentence fragment and arrive at a conclusion that either satisfies or doesn't, but in a prodigious number of cases it does.

The point is that people do talk in sentence fragments that are comprehensible, and conversational deletion is a sufficient explanation for what we're discussing here. It should be remembered that nowhere is it written that something someone actually says has to be clear and unambiguous, or that any sentence fragment must point to a single complement for its completion. When we hear such talk we decide for ourselves whether there is a single word (or set of words) that will complete the sentence, and we try out different candidates until we think we've found something that works. If nothing works, we might well ask, as The Dude does in The Big Lebowski,

"The fuck you talkin' about?"

Journalists practice the 5W1H rule when researching stories. The five Ws are always listed as What, Who, Where, When, Why. How trails the pack. (Wikipedia, the 5Ws entry). I contend that "What's" prominence on the list makes it the first W word thought of in the "Fuck you talking about," construction. Over time, it effectively monopolized the construction.

Not the answer you're looking for? Browse other questions tagged grammaticality conversational-deletion or ask your own question.

50
Why is the subject omitted in sentences like “Thought you'd never ask”?
0
How do natives pronounce “what the f**k?”
1
Is it ok to use just “Careful!” instead of ”Be careful!” preceded by “be”?

13
What is the proper usage of “not only… but also”?
3
Can you replace the present perfect continuous with present continuous when a concrete time period is specified?
3
Difference between “Can't you” and “Can you not”?