I have often come across various posts that people make on any social media platform as, for example:

En route to the Taj Mahal.

Although what I have been taught that it always has been only 'en route', without 'to'. What I feel is that it's a mass-mistake committed by so many people, that they have started to believe in the fact that it's also true (i.e., 'en route to').

Hence, I would like to have an even more expert view on this.

Although, I myself have done a bit of my own research:

-Historical comparison of en route to vs en route 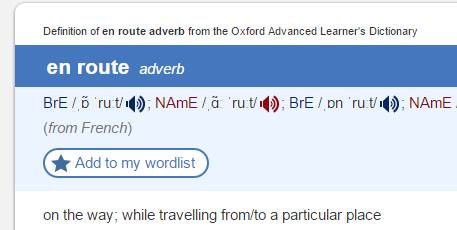 So my inference has been that:

Thereafter, I would like to finally know that if my research and inferences are correct.

Merriam-Webster shows the "en route to" sentence structure: "I finished my homework en route to school."

If you just say 'en route Paris', the reader doesn't know if you're en route TO Paris, or en route FROM Paris.And I agree with the above, if you're stopping to buy something en route, it needs neither a to or a from.

In high-level protocol office procedures with the military, we were always taught to use 'en route' (and omit 'to') because it inferred a person/vehicle was 'on the way to' a destination, thereby rendering 'en route to' redundant.

Replace en route with on the way, and the usage is the same:

When describing origin or destination, you'd have to use to and from just the same.

Not the answer you're looking for? Browse other questions tagged grammar phrases differences syntactic-analysis french or ask your own question.

6
US Route 101 — “The 101”
3
“just married” or “just wed”?
4
Etymology of 'just' as an adverb and its French connection
7
Is there any difference between “a few relatives” and “a few relations”?
3
Is “enroute” an acceptable variant of “en route”?
3
Why would you call “before” a preposition when it precedes a clause?
1
Difference between “just a minute” and “just a second”
0
Which is correct, “The man was seen to draw just now.” or “The man was seen to be drawing just now.”?
3
Does the phrase “not nearly as many as” imply some level of similarity?