Gender Usage of Confidant vs Confidante

After reading an article in which it was stated that Che Guevara became a confidante of Fidel Castro, I am now very confused about the proper usage of the words confidante and confidant.

Every definition I can find of "confidante" says that it is mainly used for a female friend with whom you share personal information. This obviously doesn't work in the case of Fidel Castro and Che Guevara. In addition, I have read or heard this word used many times to refer generally to a friend with whom you disclose personal information - male or female. Actually, I always associated this word with a male friend...

The dictionaries say that "confidant" is the term used for a male friend in this regards, but I rarely even see it used.

So my question is, has the usage of "confidante" become more gender-neutral in recent history or am I just ignorant? Is it appropriate to use "confidante" to refer to a male friend, or should I only use "confidant"?

Some believe confidant/confidante should be gender-specific in English à la fiancé/fiancée. Others believe there is no need (especially as it is not a pure import from French) or are blissfully unaware of its gender-specific connotations.

Here is some advice (admittedly in the Law niche) from A Dictionary of Modern Legal Usage by Bryan A. Garner: 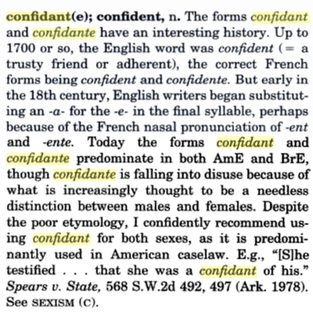 Also here is view from grammarist.com which broadly agrees that confidant is preferred.

Confidant, which refers to one to whom secrets or private thoughts are disclosed, refers to both males and females. Confidante sometimes appears in reference to females, but the male–female distinction is unnecessary here. One might argue the distinction is justified because it preserves the French forms, but in fact, confidant is not even a French word. It was invented by English writers in the 18th century. The French equivalent is confident (which is indeed inflected confidente for females).

So Che Guevara became a confidant of Fidel Castro seems to be preferred by both these sources.

EDIT Looking at N-Grams, it seems the gender specific users are in the majority. I see this order of popularity in BrE ...

Not the answer you're looking for? Browse other questions tagged word-choice nouns american-english gender-neutral or ask your own question.