What does this word mean in this passage from Frank Herbert's Dune?

I am only familiar with "faggot" being used as a slur for a gay man or as a bundle of sticks.

Some statements in the preceding paragraphs that provide context:

...A predawn hush had come over the desert basin. Straight overhead, the stars were a sequin shawl flung over blue-black...

...As the Duke watched, the moon dipped beneath the Shield Wall cliffs, frosting them, and in the sudden intensity of darkness...

And the passage itself:

To the east, the night grew a faggot of luminous gray, then seashell opalescensce that dimmed the stars.

The preceding paragraphs suggest to me that "faggot" is describing a color. As an allusion to a burning bundle of sticks I would have expected him to say orange or red. Instead he says "luminous gray".

This book was written 50 years ago so I'm wondering if it had another meaning back then.

A faggot is a bundle of sticks used as fuel, and to start (and maintain) a fire. In this instance, Herbert probably uses it as a metaphor to represent a weak source of light: "To the east, the night grew a glimmer [faggot] of luminous gray..."

I have two ideas about this. One comes from embroidery and crochet, and one comes from the word for bassoon in many European languages.

And in knit and crochet, fagot stitch yields a narrow strip of more porous, open texture.

Here's a picture of a predawn horizon: 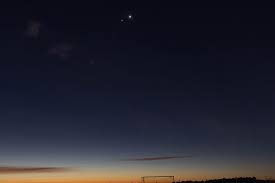 I like the textile idea because of the "sequin shawl."

I've researched this a bit more and I didn't find any definitive answers.

The most common response people have to this question when asked on other sites is that "faggot" refers to a bundle of burning sticks (e.g. this Quora post).

There is a reference to red farther down the page:

He had never imagined anything here could be as beautiful as that shattered red horizon and the purple and ochre cliffs.

Wikipedia talks about the red/blue characteristics of opalescence:

So I think the passage is talking about a sunrise that starts red (like the yellowish red/orange of opalescence) to the soft orange light of a bundle of burning sticks, and finally to the gray of the Arrakis sky.

I there are more definitions in the OED than I would have thought, but Herbert is being somewhat oblique no matter what meaning he intends. To my mind, the most likely is:

This is the only sense of the word that seems to include the actual act of burning the bundle of sticks intended for fuel (which is the first definition). It seems clear that in the context of dawn he means to evoke the image of a distant flame.

It is most peculiar that he suggests the color of this "burning" to be grey, but there is no other definition of the word that does not imply a slur or some form of bundle of sticks or rods.

Not the answer you're looking for? Browse other questions tagged meaning-in-context books colors or ask your own question.